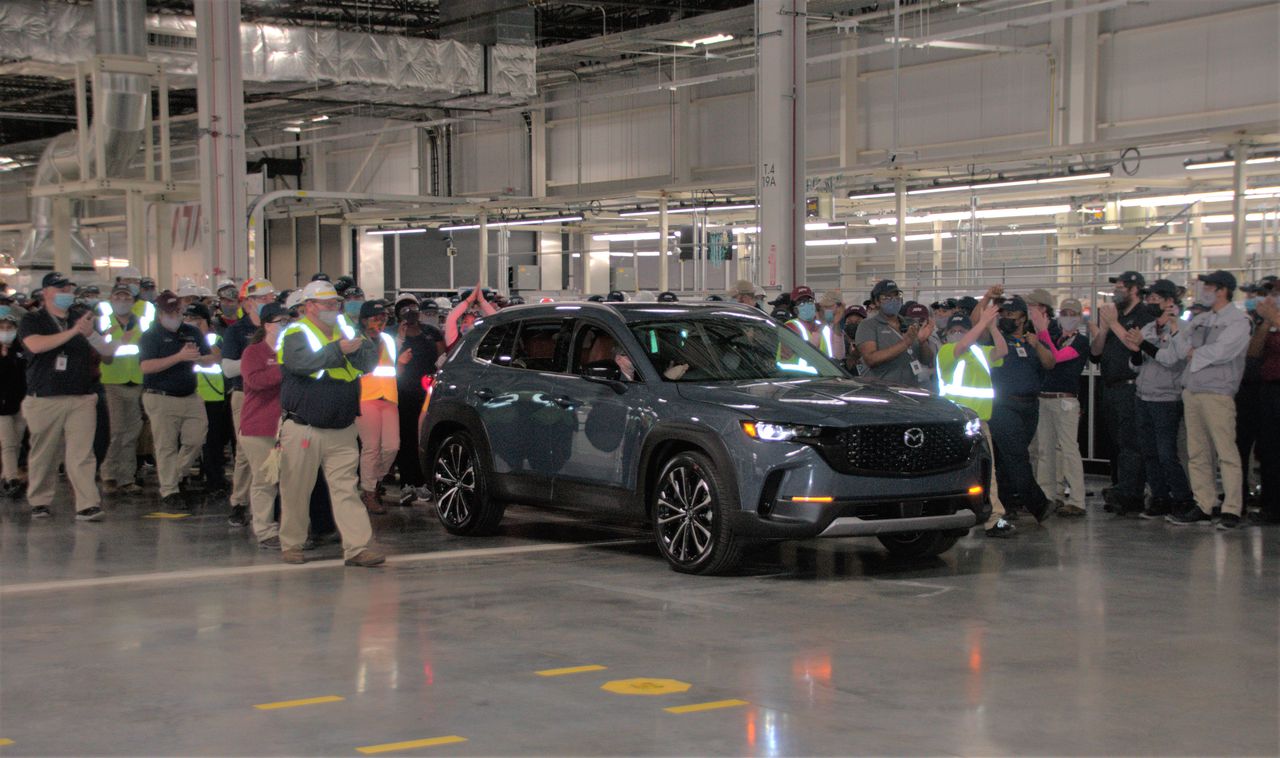 Mazda rolled the first of its new CX-50 SUVs out of its new Huntsville production line on Wednesday to loud cheers from workers and big smiles from local executives.

The new SUV is the company’s first vehicle specifically designed and built “for the North American market,” Mazda executives said.

“It’s designed for people who have an active lifestyle who want to get out in nature and enjoy the ride,” said Mazda North American Operations President and CEO Jeffrey Guyton. “It’s at least a Mazda, but it’s also beautifully made for the outdoors.”

“That means bigger tires, room for gear, and a design for weekend trips or traffic across town,” Guyton said.

That’s another focus for a company that traditionally built most of its cars in Japan “for the world,” Guyton said. It meant compromises to fit into many markets, he said, “but the ability this plant gives us is the ability to make something that we think will hit a very sweet spot in what Americans want.”

The rollout came almost exactly four months after Toyota rolled its first car out of the production line on the other side of the companies’ $ 2.3 billion plant. It was a challenge to get Mazda’s side up and running in the pandemic, but Guyton said production is on schedule.

“You have been working so hard against such a huge adversity the last few years to stand up for this plant and build this line,” Guyton told workers. “So the first thing we celebrate today is all of you.”

Guyton said the event was streamed across the Mazda company to celebrate the help of many teams to today’s success. And he celebrated “our solid partnership with Toyota.”

“It has been instrumental in enabling us to invest more than $ 2 billion here jointly to create more than 4,000 jobs here in the factory and thousands more with business partners in the area,” he said.

Dealers will “in a few weeks” be “delighting customers with this incredible ride,” Guyton said.

“When we celebrate this exciting start for our Mazda vehicle and already launched Toyota, let’s send a message outside here …,” Hostettler said. “We have about 1,200 seats left, and for those of you who want to be a part of this moment in history … and be a part of the Mazda-Toyota production family, finally come with us.”

Huntsville Mayor Tommy Battle reflected on the cotton fields that filled the giant factory space five years ago. “We provide jobs to more than 4,000 people,” Battle said. “It is very exciting to see it all connected. It has taken a lot of work to get here. ”