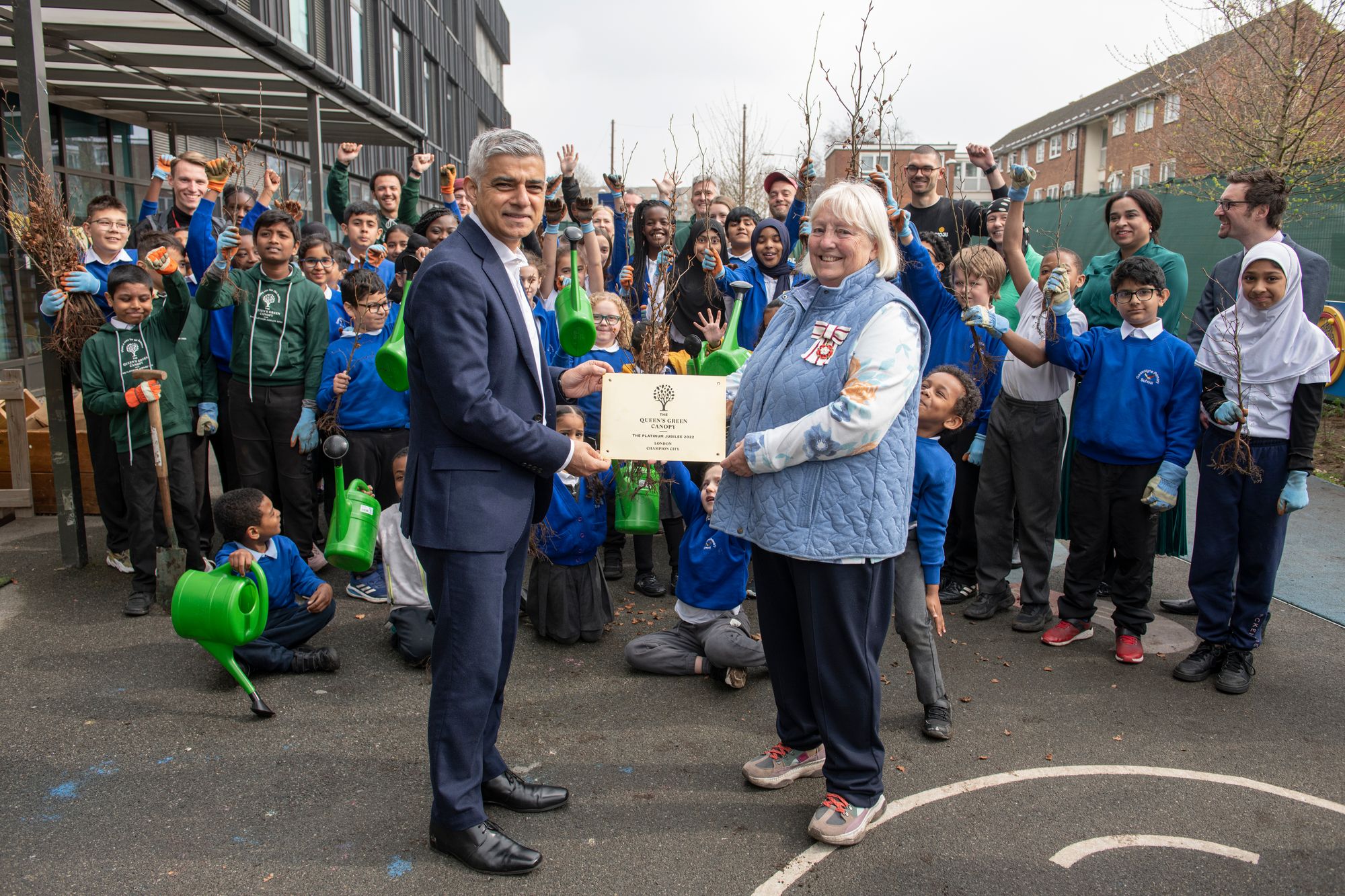 Submitted by The Queen’s Green Canopy

On Wednesday March 30, the Mayor of London Sadiq Khan joined in to “Plant a Tree for the Jubilee” at Gascoigne Primary School in Barking, in London, as the city was unveiled as a “Champion City” under The Queen’s Green Canopy (QGC ) initiative.

The Mayor visited the school to plant Jubilee trees and learn about a pioneering project led by QGC Partner Trees for Cities (TfC) which has been developed to mitigate against the detrimental effect of air pollution, particularly on children.

The Queen’s Green Canopy launched a “Champion Cities” program to celebrate some of the nation’s outstanding cities which have trees and woodland as a central part of their plans for green spaces.

Working with partner TfC, The Queen’s Green Canopy is continuing its program to support urban greening in areas of high socioeconomic deprivation and low canopy cover.

The trees planted at Gascoigne Primary School reflect London’s ambitious target to increase tree canopy cover by 10 per cent and support ambitions to become a net zero carbon city by 2030.

Sadiq Khan, Mayor of London, said: “Planting trees plays a vital role in our efforts to tackle climate change and air pollution and I’m delighted that London has been made a Champion City for The Queen’s Green Canopy initiative.

“This is a fitting way to mark Her Majesty’s Platinum Jubilee and I’m pleased to be joining pupils at Gascoigne Primary School to create a healthier, more beautiful and wildlife friendly school environment.”

David Elliot, Trees for Cities, said: “We are delighted that London has been awarded Champion City status by The Queen’s Green Canopy.

“We welcome the Mayor of London to our ground-breaking Planting Healthy Air Project at Gascoigne Primary School, which provides a showcase for the multitude of greening activities taking root across the capital.

“By supporting the planting of urban trees as a legacy to Her Majesty’s Service to the nation, Trees for Cities is helping to send a powerful message to young people to connect with urban nature and to re-green the city for future generations.”

Get all the latest news, updates, things to do and more from London‘s dedicated InYourArea feed