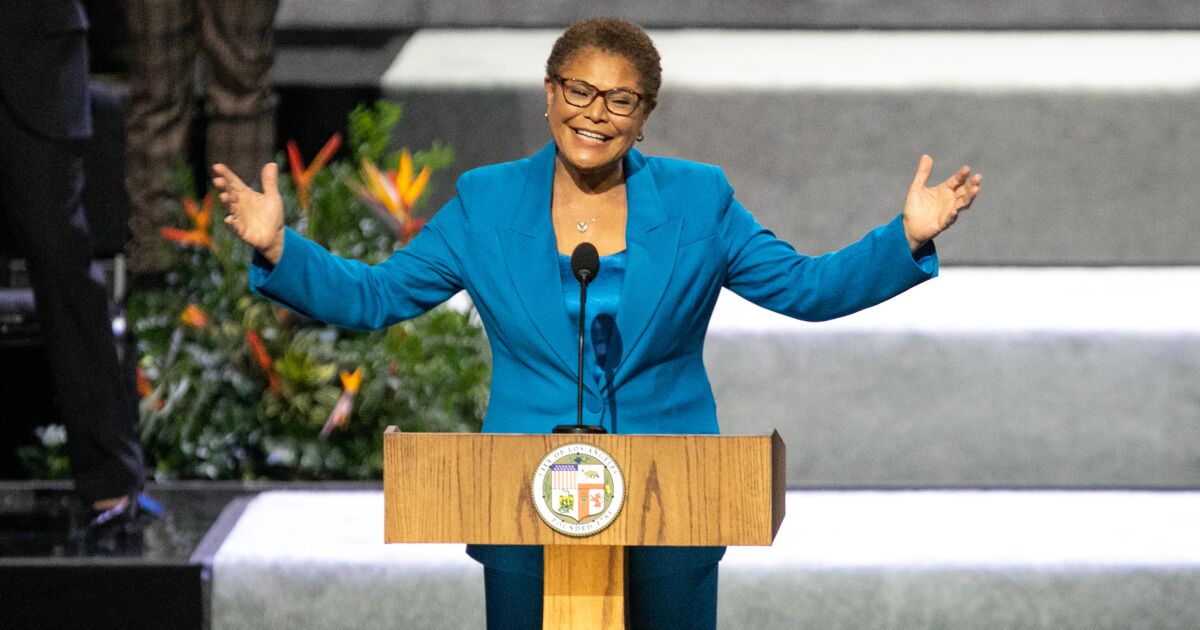 No mayor comes into office without expectations. Especially the mayor of a city where residents are as desperate and as hopeful for change as so many in Los Angeles are right now.

But there are special, additional expectations that also come along with being a first, as Mayor Karen Bass is as the first Black woman to lead Los Angeles. Some of those expectations are good. Some are unreasonable. All are understandable, particularly for people who long felt disenfranchised.

And so on Sunday, Bass, who often shied away from the ceiling-shattering possibilities of her candidacy on the campaign trail, seemed to shoulder the reality of all she expected to accomplish as she strode across the stage of a packed Microsoft Theater — impossible to miss in her royal blue suit.

She absorbed the recurring chants of “Karen! Karen! Karen!” that cut through the nondescript, but deliberately “Black Panther”-esque Afrobeats piped through the speakers throughout her inauguration program.

She smiled through the many elected officials who put her on an impossibly high pedestal, insisting she was the right person, in the right office, in the right city at the right time.

“A brave, a strong and steady force” with a “finely honed moral compass.”

“She doesn’t pit community against justice. She creates communities of justice.”

“There’s no leader more capable of pulling us together.”

Then there was the oath of office administered by Vice President Kamala Harris — herself a Black woman and a first many times over.

The poem delivered so beautifully by former National Youth Poet Laureate Amanda Gorman — another Black woman who opened by saying, “This is the way forward, with a woman has met many roadblocks instead of road.”

Bass even briefly dwelled on it herself in her inauguration speech: “Making history with each of you today is a monumental moment in my life and for Los Angeles.”

But L.A.’s newest mayor seems to understand all too well that while the special expectations of firstdom are both flattering and daunting — especially when set under the glare of TV cameras and spotlights — it won’t be the donors, the campaign workers, the politicians or even the most devoted volunteers who will determine whether she meets them.

It’ll be average Angelenos, like the few dozen who came to hear the then-mayor-elect speak in Leimert Park on Saturday. These are people — most of them Black and many of them women — who, for the most part, couldn’t swing a ticket to the Microsoft Theater on Sunday.

They stood alongside a who’s who of Black elected officials, clapping, cheering and gazing in awe at Bass, perched on a chair on stage.

Bass was straightforward, not mincing words or using political euphemisms to explain exactly what she as mayor plans to do for Black Angelenos specifically.

“I obviously understand that we have very specific needs. Very specific things are different for us,” she said, prompting nods all around. “So, for example, when people say ‘diversity.’ ‘I have diversity.’ Well, what does that mean? … You have people of color? Tell me what color because that’s often the time when we get excluded.”

But navigating that firstdom, Bass also set other expectations. About coalition building and about sharing power across racial and ethnic lines.

“Just do the math,” she said. “Put us all together and what have you got? You’ve got [in a] word power. You have the majority. You have a supermajority.”

Even before she was sworn in, Bass was already arguably the most popular mayor ever elected in Los Angeles. She secured more votes than anyone who has run for the office, trouncing her opponent, billionaire developer Rick Caruso, by nearly 10 points despite him outspending her campaign by tens of millions of dollars.

And so the excitement on display in Leimert Park and at the Microsoft Theater — the sort of clapping and cheering that, in L.A., is normally reserved for sports teams, not politicians — presents a clear opportunity inspire more civic participation in crafting public policy and in running the city.

An opportunity to do more than what historian D.J. Waldie told The Times every other mayor of Los Angeles has done, including Eric Garcetti. All were “not particularly dynamic and not capable of capturing very much of the public imagination and giving residents and voters confidence that government is paying attention to things that most concern them,” he said.

There are many things working against Bass, of course. Chief among them are apathy and disillusionment. Then there’s the tiresome toxic masculinity that has taken root in the Los Angeles City Council.

Aside from the high on Sunday, this year has been full of many lows in city politics, including the notorious leak of a racist recording of three council members and prominent labor leader discussing how to dilute Black political power in favor of Latinos.

The only thing that might be worse is last week’s scuffle between one of those council members, Kevin De León, and an activist who had been following him around a Lincoln Park auditorium full of kids, loudly calling him racist and telling him to resign.

Both men claim they were attacked first. The video, circling online, has become something of a Rorschach test. The Los Angeles Police Department will have to sort it out. Meanwhile, De León seems to have become only more resistant to resigning, clearly convinced he now has the moral high ground.

“My commitment is solid to my community, to my constituents,” he told The Times. “I’m not going to let a group of extremely hostile individuals from outside the district bully me or my staff or my constituents.”

Do you hear that covert narcissism disguised as altruism? Cue the public outrage and the retreat to cynicism.

Is Bass, inspiring in her firstdom as mayor, enough to overcome that sentiment? Can she persuade Angelenos to, she said her inauguration speech “not just dream of the L.A. we want, but to participate in making the dream come true.”

On Saturday, in Leimert Park, she sure tried.

“I think what’s going on with the City Council is a shame,” Bass said. “But it shows a weakness in our City Charter, because there’s actually no way to force him out — except for the voters.”

There was scattered applause, a dash of hope and a healthy helping of skepticism.

“Voters are going to have to see something tangible in order to believe again,” she said.

That’s what firsts do.

The metaverse is coming and will change lives