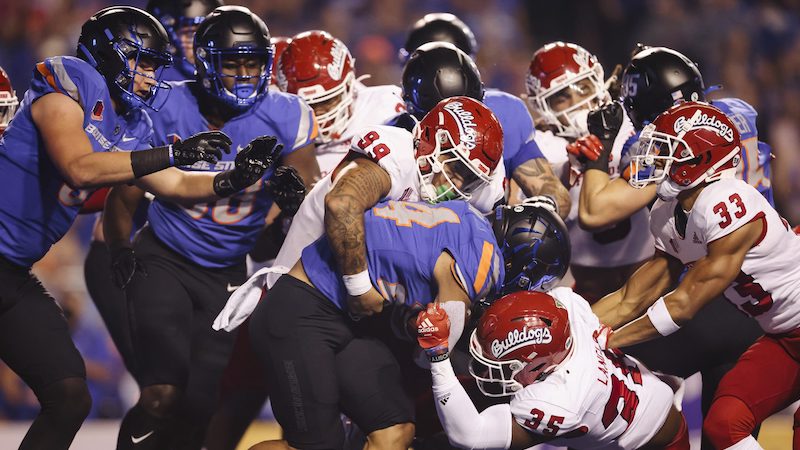 It’s a little unfortunate that the winner of the MWC plays in one of the first bowl games of the season. But that’s the way it goes.

The Bulldogs face the Cougars, who finished seventh in the Pac-12 with Jake Dickert in his first full season as head coach. The Cougars finished with a 7-5 record, highlighted by a signature win over Wisconsin early in September before Paul Chryst got fired.

Incarnate Word transfer QB Cameron Ward was supposed to be one of the best signal-callers in the Pac-12, and he didn’t disappoint, finishing the year with 3,094 yards passing and 23 touchdowns while adding another five scores with his legs.

The Bulldogs won the MWC by defeating Boise State in the MWC title game on the Blue Turf, and Jake Haener gets an opportunity to finish his collegiate career with a bowl game victory. Haener was conservative against the Broncos, going just 17-27 for 184 yards and a score while Jordan Mims scored twice to get the 28-16 victory.

After a 1-4 start, Fresno State has won eight in a row and is one of the hottest teams in the country. On top of that, it’s just a few hours from Fresno to LA, so the stadium should be full of Red Wave supporters.

The Bulldogs finish the year with nine wins and a bowl victory after things looked ugly back in October.

The MWC runner-up heads to the Frisco Bowl to face the North Texas Mean Green, which finished the season with a 7-6 overal record and a 6-2 mark in Conference USA.

Junior QB Austin Aune put up eye-popping numbers, finishing the year with 3,309 yards and 32 touchdowns, and 13 interceptions. His best game of the year came against Florida International in which he threw for 414 yards and five scores.

The Mean Green have three running backs that finished the year with 500 or more yards, and Jyaire Shorter led the team with 10 receiving scores despite catching just 22 balls.

Boise State was one game away from an undefeated MWC season, but the red-hot Bulldogs proved too much. Since September 23, Boise State has just two losses, against BYU and Fresno State.

The Mean Green can score points, but the Boise State defense is one of the best in the nation, ranked 19th in points against per game (18.54). Broncos running back George Holani finished with 1,133 yards and 10 scores and could cause serious problems for North Texas.

The key to this game will be Boise State’s defense and the ability of BSU’s offense to slow down the Mean Green and keep Austin Aune on the sidelines as long as possible. Boise State thrives in these situations, and everything depends on how well the Bronco defense performs.

This should be one of the better games in the early slate, but the Broncos are one of the toughest teams to play, and they sneak out a tough victory. However, North Texas is a short drive away from Frisco, so the Mean Green faithful should be out in full force on Saturday.