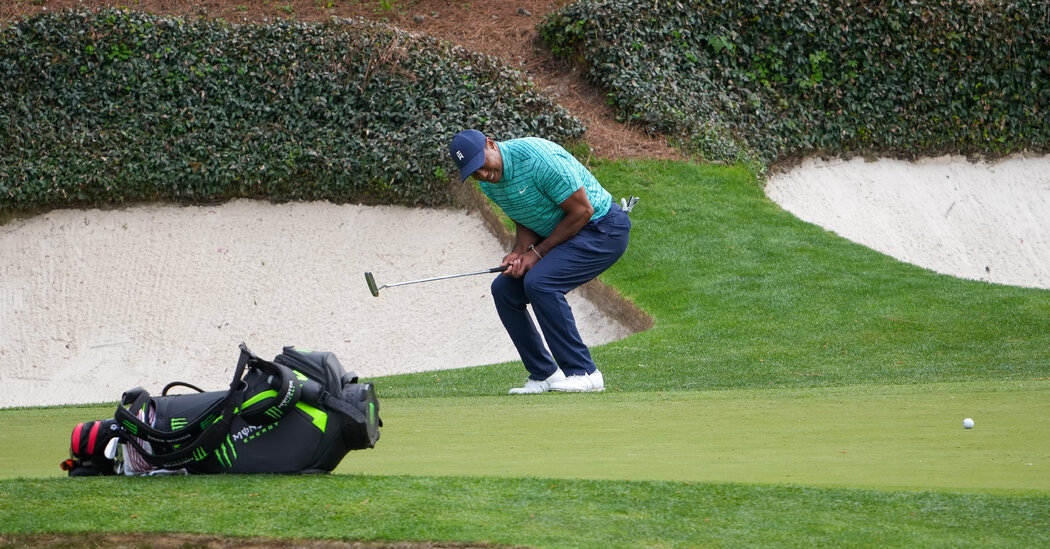 AUGUSTA, Ga. – After 18 holes of golfing and about as many hours afterward recuperating, Tiger Woods is playing again at the Masters Tournament.

It’s not going nearly as well as it did on Thursday.

Woods bogeyed four of the first seven holes on Friday, a day after he shot a 71 to stand at one under par, and fell sharply down the leaderboard. He fought back with birdies on Nos. 8 and 10, and then fell back again with bogeys on Nos. 11 and 12.

Woods, playing less than 14 months after a car wreck that left his leg on the brink of amputation, had anticipated heightened difficulties as the week progressed and his body weathered the hilly stresses of Augusta National Golf Club.

And while most of Woods’ three birdies on Thursday came on the back nine, he has already at least tripled his day-over-day bogey count.

He is playing alongside Joaquín Niemann, who had joined him for Thursday’s round. (Shortly before competition on Friday, Louis Oosthuizen, who played with the men on Thursday, withdrew because of an injury.)

At least two players – Charl Schwartzel, who won the Masters 11 years ago, and Sungjae Im – will enter weekend play at three under par.

Schwartzel stitched together a 69 on Friday after shooting even on Thursday, his scorecard aided by five birdies. His most drastic swing came on the fourth hole, which stretches 240 yards, where he had made birdie on Thursday and recorded a bogey on Friday.

Despite his improvement from Thursday, Schwartzel pronounced Friday’s round “tough,” in part because of winds that pummeled the grounds, particularly around Amen Corner.

“I think anybody would be happy shooting level par,” he said. “If you shoot three under, that’s a bonus, and you have hit a few good shots and made a few extra putts.”

Im, who is playing in his third Masters and tied for second in his debut at Augusta National, led the field on Thursday at five under par but opened his Friday with a bogey on No. 1. His performance stabilized until the back nine, where he stumbled badly on Nos. 10, 12, 15 and 18.

Dustin Johnson, who won in 2020, when Im was the runner-up, slipped on Friday, scoring a 73 after a 69 in the first round. But at two under par, he, too, will enter the weekend as a contender.