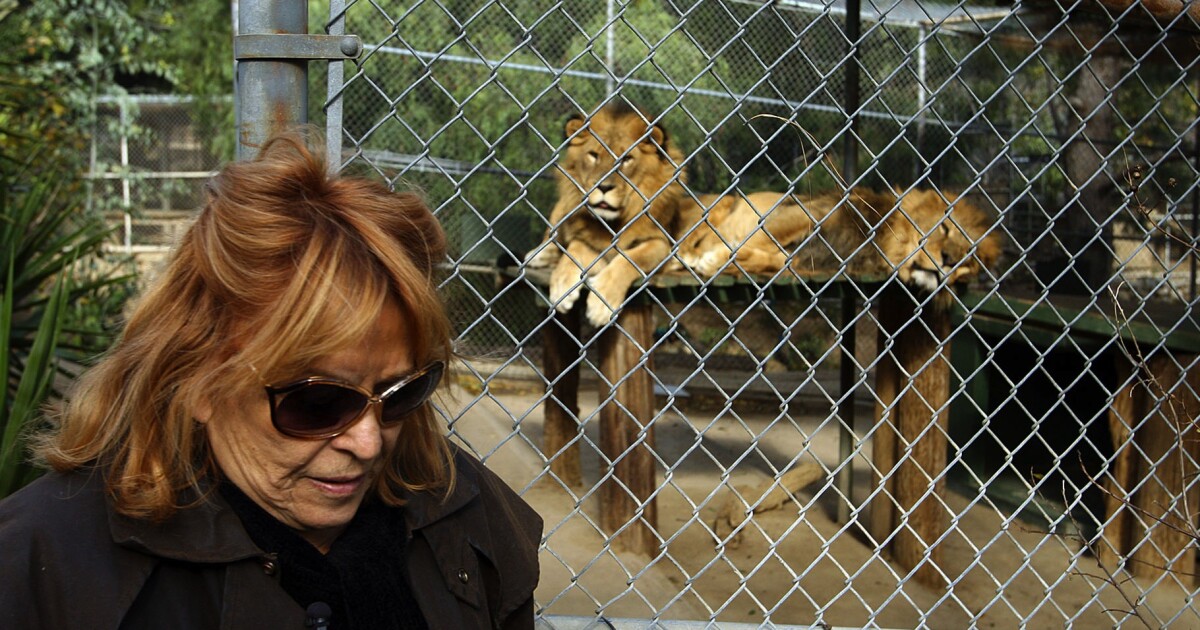 Martine Colette, an animal rights advocate who founded the sprawling Wildlife Waystation at the doorstep of the Angeles National Forest where thousands of rescued animals – lions, alligators, wolves, owls, pot-bellied pigs and chimpanzees – awaited new homes, has died at 79 .

For years the 160-acre sanctuary stood as a model for rescuing exotic animals abandoned by impetuous owners, traveling roadside attractions and research labs, while Colette was its one-woman tour de force, leading rescue missions and charming Hollywood celebrities into supporting her cause.

Larger than many municipal zoos, the sanctuary was a way station for animals that had essentially been disposed of and Colette became a commanding voice for more robust legislation to regulate exotic animal ownership, particularly those inclined to bring in animals from the wild for their personal collections .

But the sanctuary closed for good in 2019 after years of financial and regulatory problems. The facility also suffered extensive damage in the 2017 Creek fire and severe flooding two years later.

Colette, who died Jan. 23 after battling cancer, admitted she put her time, money and energy into the sanctuary, often at the expense of bookkeeping or complying with what she often saw as nettlesome rules.

“The way station has always done wonderful things for animals,” she told The Times in 2000. “But business has not been our strong point.”

In the last two years, the state Department of Fish and Wildlife and the remaining way station employees and board members have worked finding a new home for more than 500 animals. Eighteen chimpanzees and two hybrid wolf-dogs remain at the facility.

Born in France, Colette was the daughter of a Belgian diplomat and lived most of her childhood in Nairobi, Kenya, where she later worked in trapping camps, where lions and other exotic animals were taken before being shipped off to zoos. She said she was appalled at the conditions the animals were forced to endure.

Her first rescue was a mountain lion confined to small cage at an animal show at the old Pan-Pacific Auditorium in Los Angeles, where she had moved to pursue a career as a Hollywood costume designer. Soon she had a yard full of animals, spurring her move to Little Tujunga Canyon Road, where she opened the Wildlife Waystation in 1976.

She took a personal interest in the animals, saying they were often far more dear to her than most of the humans she knew.

There was Mystery, a young chimpanzee whose parents had been confined to a research lab. There was Zair, a lion born at the way station after the rescue of 27 lions, and tigers from a compound in Idaho where the animals lived in misery. And there was Shauri-ya Mangu, a baby chimp who roamed freely in her house. She found new homes for all of them.

Over the years, the sanctuary grew from a small volunteer-run refuge for abused, abandoned and sick animals into an internationally known refuge for exotic animals. Funded solely by private donations, the “ranch,” as it was called by employees, was credited with saving more than 70,000 animals.

An enthusiastic evangelist for wild animals, Colette frequently spoke at schools and hosted field trips to the way station. Strong-willed and sometimes stubborn, Colette said her lone interest was improving the lives of animals.

“Of course, I am firm and direct, sometimes difficult,” she told The Times. “Some people do not like that. But what kind of woman do you think it takes to build a place like this? ”