Marnus matches legends with third straight ton as Head dazzles again, but Windies shoot themselves in the foot 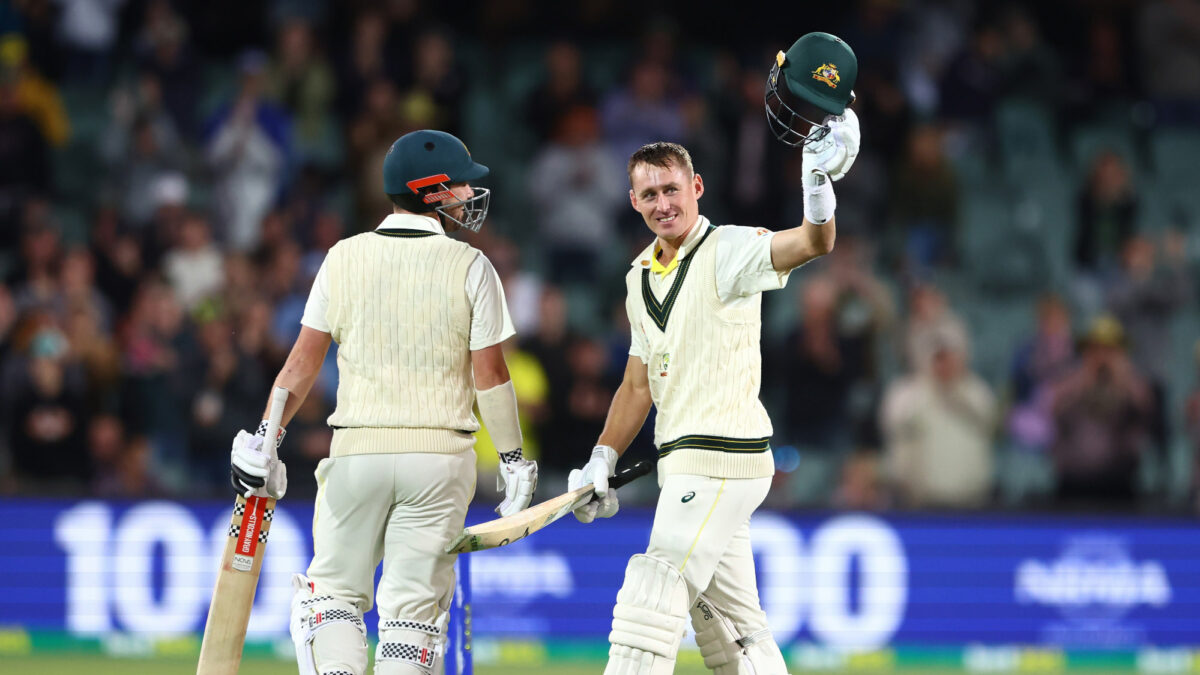 Another century from Marnus Labuschagne and Travis Head’s latest middle-order blitzkrieg has steered Australia to a dominant position after the first day’s play in Adelaide – but the West Indies will undoubtedly be ruing a series of opportunities squandered to gain a foothold in the match.

Right in the contest after first removing David Warner (21) early and then dismissing Steve Smith for the first time this summer, chipping a return catch to Jason Holder for a duck, captain Kraigg Brathwaite’s bizarrely defensive fields and inopportune use of his slow bowlers allowed Labuschagne and Head to rally.

A wicketless night session put paid to the hard work of their new-look seam attack, and saw Australia finish the day 3/330, with Labuschagne (120) and Head (114) eyeing enormous scores once play resumes on Friday.

Making matters worse for the Windies, debutant fast bowler Marquino Mindley managed just two overs before limping off with a hamstring injury, adding to the team’s already extensive injury list. He had been parachuted into the team just hours after getting off a flight from the Caribbean due to the team’s mounting injury list, only for his chance to prove painfully short.

With both opening bowlers in Perth, Kemar Roach and Jayden Seales, forced out through injury, the tourists didn’t need to lose another toss. Acting captain Smith gleefully took the opportunity for first use on an Adelaide Oval pitch that traditionally rewards runs on the board, not least because Josh Hazlewood (soreness) had joined regular skipper Pat Cummins in the casualty ward, Scott Boland and Michael Neser stepping in.

Having dominated headlines in the lead-up over his public falling-out with Cricket Australia over his captaincy ban, Warner began in a blaze of boundaries, taking a particular liking to Alzarri Joseph.

The bowler would have the last laugh, though: after three boundaries in four balls, a fuller, wider offering suckered Warner in, the left-hander’s footwork all but nonexistent as he flailed an edge behind. As dismissals go, it was near as ugly as his drag-on in the first innings in Perth, and leaves his spot in the team in jeopardy for reasons now both on-field and off.

Just as they had at Optus Stadium, Usman Khawaja and Labuschagne immediately took control to steer the Aussies to lunch, helped out by Brathwaite’s first tactical oddity of the day. The very ball after Warner fell, with a still-fresh Khawaja and a new batter in Labuschagne who had been troubled by a short-ball barrage from Joseph in Perth, the Windies turned to the unassuming spin of Roston Chase.

All up, Brathwaite used six different bowlers in the first session – including himself – as Khawaja cruised to a half-century and Labuschagne steadily played himself in.

“I don’t think there has been clear enough direction from Kraigg Brathwaite the captain,” Julian said.

“There have been too many changes – bowlers bowling at different ends, spinner on early.

“That is unsettling for the side, especially the first session and the first hour of a Test match.

“You lose the toss and you are bowling. You have tried all those bowlers – I mean, it’s only been an hour and a half.

“Chase was their third bowler used. Three overs, 0/20 with a deep point and a deep square leg. You can’t do it.

“It has been all over the shop.”

Having lost Mindley, sent for scans just two overs into his first spell as a Test cricketer, it would be the tourists’ seventh bowler who would produce the breakthrough. Debutant Devon Thomas, a 33-year old former wicketkeeper with 21 ODIs, 12 T20Is and two international wickets from way back in 2009 under his belt, found a way through Khawaja at last, the left-hander perhaps not paying the part-timer enough respect as he missed flick to leg.

Khawaja’s desperate review gave the Windies their first stroke of luck perhaps for this tour, the ball projected to narrowly clip leg stump. When Smith followed the over later, Holder rewarded for an afternoon of toil with a straightforward return catch to remove the skipper for the first time this series, Australia were 3/131 and looking a tad vulnerable.

It was a situation that called for a Head counterattack, as he’d done to great effect with twin centuries in last summer’s Ashes series. But once again, Brathwaite dropped the ball to gift the left-hander, who has a tendency to be flaky early in innings, a chance to get his eye in.

Joseph, comfortably his fastest bowler, would get just two further overs at the new man in, before Chase again returned. Suffice to say that the West Indian off-spinner, who with five Test centuries is arguably more suited to a spot in this team as a batter, has joined the mile-long list of international finger-spinners to find Australian climes a graveyard of career-defining proportions. 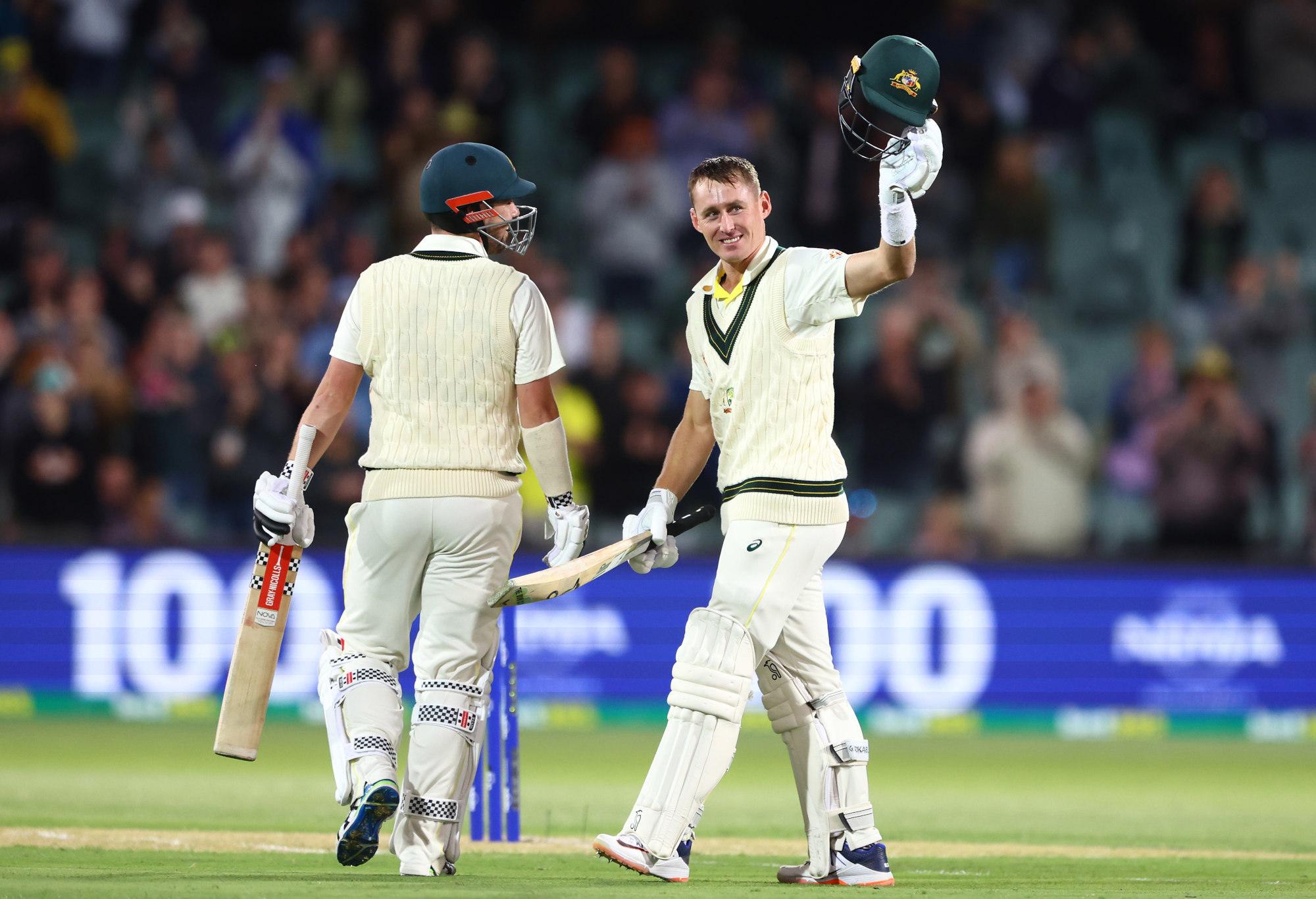 Milked for singles as Brathwaite’s fields, far from searching for further breakthroughs, became intent on stopping boundaries, Chase offered neither control nor menace, and wasn’t helped in the least by his gun-shy captain.

By the tea break, Chase had leaked 47 runs from his eight overs at nearly a run a ball, Brathwaite had joined him for a similarly impotent three-over spell, and Head and Labuschagne had sailed to a 57-run partnership with the greatest of ease.

On 69 as the night session began, the most threatening period of day-night Tests scarcely seemed likely to trouble Labuschagne. Indeed, where his previous innings this series had been pockmarked with the odd miscue, lucky break or narrow miss, this was chanceless, ruthless, and sublime. Having surged to the top of the ICC Test batting rankings during the week courtesy of his twin tons in Perth, this was a century worthy of the title.

Together with Head, who raced towards three figures of his own more through excellent running between the wickets than his usual flood of boundaries, the formality that was Labuschagne’s century arrived with a cut through point that bisected both close-in fielders.

The number three’s third century in a row, the second time he’s done it, puts him in esteemed company: just four men have a longer run of tons in Test history. Indeed, the last Aussie to match the effort in a single series was Warner in 2015/16 against New Zealand.

The man before that? None other than Don Bradman himself, all the way back in the summer of 1947/48.

Labuschagne’s golden summer of 2019/20 brought him 896 runs: with three Tests and perhaps a further innings in Adelaide to come, he already sits at 428.

The only thing that remained for the day was a Head century: having missed out by a solitary run in Perth, there would be no second dose of heartbreak, the South Australian’s fifth Test ton his first at home and brought up with a glorious cover drive down the ground.

For the Windies, yet again they find themselves out of the contest after just one day of the Test. This time, though, far more than in Perth, they only had themselves to blame.

7 members of Alabama family sentenced in federal bust of “one of the largest cockfighting operations” in the U.S.


After a year in limbo, Apple quietly kills its controversial CSAM photo-scanning feature