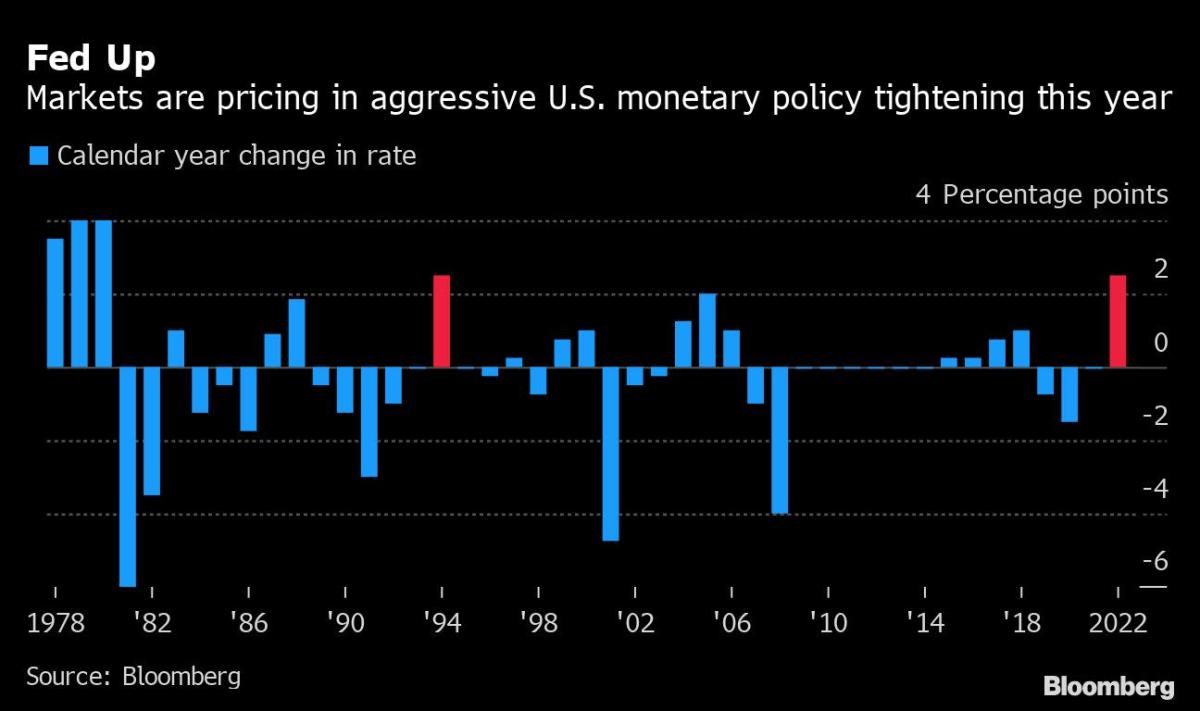 (Bloomberg) – Money-market traders are betting the Federal Reserve is heading for its most aggressive monetary policy tightening in almost three decades as it fights a commodity-driven inflation spike.

Minutes of the Fed’s March meeting released Wednesday showed that “many” officials would have preferred to raise rates by a half percentage point but were deterred by Russia’s invasion of Ukraine. Only St. Louis Fed President James Bullard dissented in favor of a half-point hike. The Fed also signaled it will reduce its massive bond holdings at a maximum pace of $ 95 billion a month, further tightening credit to cool inflation.

The Fed has not done that much tightening – 250 basis points – in one year since 1994, a famously brutal year for bond investors that even included a 75 basis point hike. The last year there was more tightening was in the early 1980s, when Paul Volcker was in charge of the central bank. Treasuries have already lost 6.7% this year, heading for the worst annual return since Bloomberg started compiling the data in 1973.

With US inflation heading for 8%, a rate not seen in 40 years, Fed officials have adopted a decidedly more hawkish tone. The latest move in market bets began Tuesday after Governor Lael Brainard said the central bank will continue tightening monetary policy methodically.

“This boils down to what does Brainard mean by ‘methodical’,” said Marc Ostwald, global strategist at ADM Investor Services.

He says the Fed wants flexibility, but not to constantly change the pace of tightening. Ostwald expects a half-point hike next month and probably in June followed by quarter-point hikes. Amid an “underlying lack of any depth to liquidity in markets, persistent high volatility will likely take a heavy toll, and by extension the Fed will become wary.”

US Treasuries fell for a fourth day Wednesday, with 10-year yields touching a three-year high of 2.66%. Tuesday’s 15-basis-points increase was the biggest since the pandemic began in March 2020. The yields have risen above their four-decade downward trend line, spurring speculation that the bull bond market since the 1980s have come into an end.

In a reversal of a recent trend, the yield curve has steepened since Brainard commented Tuesday that the Fed will shrink its balance sheet “considerably more rapidly than in the previous recovery.” The 10-year yields traded 8 basis points higher than two-year notes, after dipping below the shorter-maturity rate last week for the first time since 2019. The curve inversion last week stirred concern that the Fed’s tightening may raise the risk of a recession over time.

“The implication here is that over time, the balance-sheet reduction will lead to an increase in the term premium, which in turn will put upward pressure on the long end of the curve,” Tim Duy, chief US economist at SGH Macro Advisors , wrote in a note to clients.

The minutes showed participants agreed that the maximum monthly reduction of its bond holdings, composed of $ 60 billion in Treasuries and $ 35 billion in mortgage-backed securities, would “likely be appropriate.” That compares with the peak rate of $ 50 billion a month the last time the Fed trimmed its balance sheet from 2017 to 2019.

As the inflation backdrop worsens, Fed Chairman Jerome Powell and various other policy makers have indicated that they are willing to boost US rates in increments of 50 basis points if necessary.

Given there are six scheduled meetings left this year, the current pricing would equate to three half-point hikes and three quarter-point increases, assuming the Fed raises borrowing costs at every decision. That would lift the upper end of the range to 2.75%, a level not seen since the 2008 financial crisis.

However, even this still falls short of some economists’ expectations. Citigroup Inc. last month forecast 2.75 percentage points of increases this year and more in 2023, taking the benchmark rate to a range of 3.5% to 3.75%.