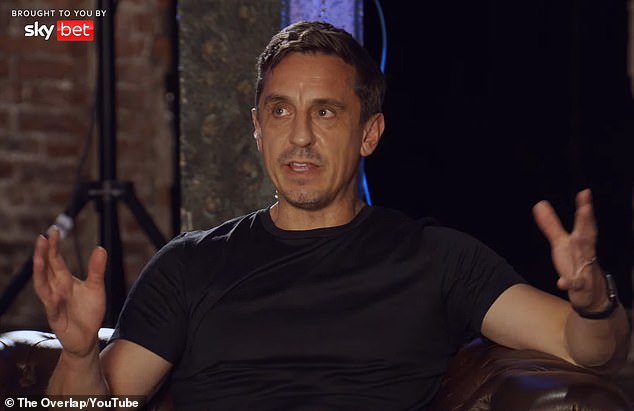 By Max Mathews For Mailonline

Gary Neville has insisted Manchester United’s transfer window is turning into an ’embarrassment’ in an explosive interview.

And Neville, speaking on the Overlap, in partnership with Sky Bet, accused the club of making the same ‘old failings’ as the De Jong saga rumbles on.

He said: ‘I would go back to Ten Hag and say I think he’s had a really impressive start, a confident start… and he’s not been supported off the pitch by an operation that can get him the players he wants.

I’d say that the manager has been given a pretty tough hand. All these clubs – Chelsea, they bring in Raheem Sterling. City, bring in Erling Haaland, Darwin Nunez goes to Liverpool. And then you’ve got Manchester United who basically can’t get a player through the door.’

United, after appointing Ten Hag this summer after a record-breakingly poor season at Old Trafford, have signed center back Lisandro Martinez from Ajax, left back Tyrell Malacia from Feyenoord, and Christian Eriksen on a free transfer from Brentford.

Chelsea are reportedly confident of beating their rivals to Barcelona midfielder Frenkie de Jong – who is Ten Hag’s number one transfer target, despite United’s three-month pursuit

But Neville questioned the success rate of players who move to the Premier League from the Eredivisie – and admitted all United fans were ‘tired’ of drawn-out transfer pursuits of players, like Jadon Sancho.

He added: ‘The old failings seem to be there, in terms of not being able to get anything over the line.

‘And it’s still happening. So, I’m really concerned about the fact that they can’t get signings over the line still.’