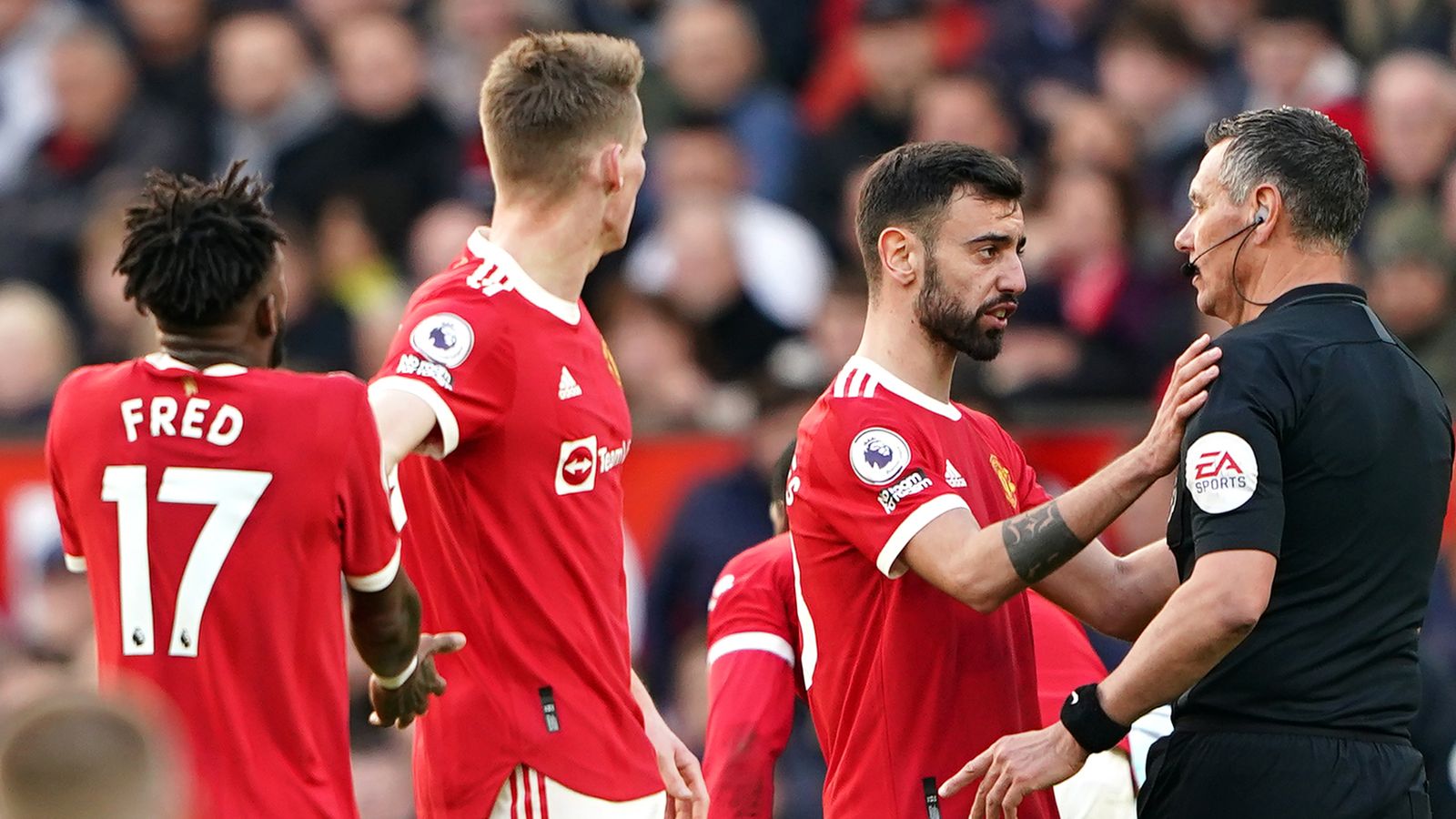 Gary Neville believes Manchester United’s tepid draw with Leicester signaled an end to their flickering hopes of qualifying for next season’s Champions League.

Neville – in the commentary box for a 1-1 draw which kept United in sixth – says his old club would like to get to the end of the season as swiftly as possible but their forthcoming fixtures mean they will not be able to go “under the radar “- with games against Everton, Liverpool and Chelsea ensuring there is no hiding place for Ralf Rangnick’s beleaguered side.

Kelechi Iheanacho put the visitors ahead on the day, nodding an inch-perfect James Maddison cross past David de Gea after Fred was dispossessed on a United counter-attack.

Fred leveled three minutes later after Leicester failed to clear the ball, Bruno Fernandes shooting from the edge of the box and the Brazilian directing home the rebound after Kasper Schmeichel pushed it out.

Maddison had a late goal ruled out for a foul on Raphael Varane, while on another day Scott McTominay might have seen red rather than yellow for catching the Leicester playmaker with a high lunge.

United struggled for fluency throughout and are now four points behind fourth-places Arsenal having played two games more – and in serious danger of failing to secure a Champions League spot next season.

“Everyone gave everything,” Fernandes told Sky Sports. “I do not believe there’s anyone who did not give everything in the game. Nobody lacked intensity. We have to keep fighting. As I said before, we have to keep looking at our own games.”

United lacked a cutting edge without Cristiano Ronaldo, who missed out because of illness, and a lackluster performance brought a withering verdict from Neville afterwards.

Asked on Saturday Night Football if United are now out of the running for the top four, he said: “I think so. The run-in started today following the international break. They had to start it with a win but they did not get it. It was the way they drew the game – that was really bad out there today.

“Sometimes, teams can look a bit rusty when they come back but I thought the break would work for United as I thought it would be good for players to get away from the club and then come back and give it a right go.

“This is going to be a long two months for those United players and fans. It’s going to be difficult in their remaining eight matches if they continue in that vein of form. It was so flat.”

Substitute Marcus Rashford, who curiously did not start despite Ronaldo being out, had claims for a penalty waved away on an afternoon where Harry Maguire’s every involvement was booed by Leicester fans.

The unavailability of Ronaldo and the injured Edinson Cavani left United without a recognized center forward so Fernandes, who signed a new contract earlier this week, and the returning Paul Pogba dovetailed higher up the pitch – to little effect early on.

Neville said: “It was really poor out there today and I did not have a clear idea of ​​what they were trying to do. I was struggling with it a bit before the game without a center forward. That’s killed Rashford today, not playing in that team.

“In the end we are not happy with the result but the second half was OK.

“The only striker we had was Marcus Rashford. We knew this morning Cristiano could not play and decided to start Paul Pogba. After 60 minutes we made the change and had a central striker on the pitch.

“It’s no secret that he was not full of confidence in the last couple of weeks. In training he is looking well but it was a question between Paul and Marcus, we went with Paul.”

“I know he’s struggled for form and for confidence but for Cristiano Ronaldo to pull out this morning and Paul Pogba to go in and for United to change the system of play as opposed to a straight swap surprised me. Too many things surrounding this club at present are uncertain.

“Talks around Harry Maguire, Rashford, Ronaldo, Cavani, the new manager, Rangnick’s future – is he going to be a consultant or is he not? They just need to get to the end of the season but it will not be easy as they’ve got Everton away, Liverpool away, Chelsea home and Arsenal away.

“It will not be a case of being able to go under the radar as everyone will be watching. It’s Manchester United. There’s no hiding place and those players are going to have to pick themselves up.”

Are United still in the top-four race?

Manchester United interim manager Ralf Rangnick still believes his team can still finish in the top four despite dropping points in a 1-1 draw with Leicester City.

“I just can not see it right now in terms of how they’re playing. With both Arsenal and Tottenham you see sides with a pattern who are playing with an enjoyment. Both managers have a style but I just do not see it with United.

“There’s no joy to how Manchester United play. It was indicative of them all season, last year and the year before that. United must go to games and wonder, ‘what are we going to get today’. They looked lethargic and I wouldn ‘t put it down to a lack of effort as I think it would be lazy for me to say that.

“They’re lacking in ideas, confidence and good players are making elementary mistakes. They’re just not enjoying their football right now. They’re drifting – the players and I think the manager is as well. He’s probably thinking it’s tough for him. .

“He thought he would do better, surely, than what Ole Gunnar Solskjaer did – but he is not. With the players he got, it’s a real struggle. He’s tried different systems, he played with two up with two narrow ones when he first came and now he’s not playing with a striker.

“People wondered whether Cristiano Ronaldo was the problem, but he is not as they certainly could’ve done with him today. There are so many problems and things that have to be sorted out at United. It may not be the manager but the players who have to go.They need a clean sweep as it’s a tough watch right now.

“For the fans and for the players, there’s a lack of belief in what they’re trying to achieve.”

“As long as it (top four) is possible mathematically, it is possible. It is our job and duty to do our best to finish the best on the best possible note.

“The picture for me is clear, internally we spoke about it but there is nothing else I can say at this stage.”

Should McTominay have seen red?

Jamie Redknapp felt that Manchester Utd’s Scott McTominay was fortunate not to be sent off after a ‘reckless’ challenge on Leicester’s James Maddison.

“I think it’s a red in the current climate. We saw a similar challenge to this earlier in the season involving Harry Kane and he got a yellow card when I thought he should’ve got a red card on that occasion.

“It was reckless and he’s out of control. He endangers his opponent as you can see how high James Maddison goes. When you’re playing and you lose control of the ball, it’s pure frustration and desperation. He goes lunging in but when you do that, you have to win the ball.Once you do not, I think it’s a red card.

“You wonder if the VAR [Michael Oliver] could’ve asked Andre Marriner to go to the monitor just to leave it with his interpretation and people would’ve accepted that. When they are so contentious and dangerous like that, it’s why the screen is there. “

Leicester boss Brendan Rodgers: “We had one in the season when Ayoze Perez was sent off, that one was similar, the ball gets way he has to make a challenge. We got the yellow.”

Should Maddison’s strike have been disallowed?

James Maddison reflects on the decision by VAR to disallow what would have been Leicester’s second goal in their game against Manchester United.

“The disallowed goal is one of them – you see them given and you see them not given. I’m obviously going to be biased and say it’s not a foul. As soon as he goes over to the monitor you know.

“I saw Varane go down. The way he went down I thought it was a twist injury. As soon as the referee went to the monitor I knew something was going to happen that was going to spoil my party.”

Leicester City manager Brendan Rodgers believes his team looked back to their previous levels in their 1-1 draw with Manchester United.

“Raphael Varane has used his experience, he gets the contact and goes down. There were opportunities for them to clear it but we were deserving of that. Every week we are seeing these types of actions, we felt we deserved to win the game. “

“In real time, I thought it was great play by Iheanacho, he held the ball up well and I thought Varane just slipped. Maddison showed composure to finish, but after seeing the replays you can see Iheanacho pulls his leg out and it is a foul. “