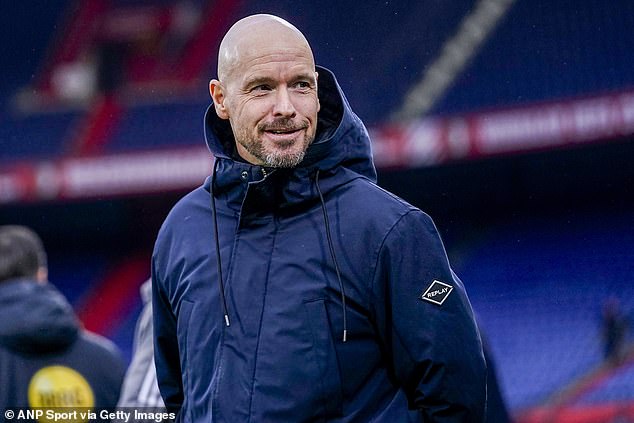 A summer of change beckons at Old Trafford. Yet again in the post-Fergie era, Manchester United must rip it up and start again.

The most fundamental change will come in the dug-out, with the Ajax manager Erik ten Hag now the overwhelming favourite to get the job.

It will be an unenviable challenge for the Dutchman. With time at a premium, Ten Hag must decide which members of an under-performing squad to dispense with and who to keep hold of.

Those who depart must then be replaced and Ten Hag will need a substantial transfer kitty to begin a rebuild which, in all likelihood, will take several years.

But as previous United managers have discovered, it often isn’t enough to make incremental progress towards some mid-to-long term ambition.

They’ll need to start getting enough positive results to keep the supporters happy and, ideally, win some silverware. United are now five years without a trophy, a long drought by their standards.

Inevitably, the rumour mill is already spinning even before Ten Hag is officially confirmed with United linked with various high-profile players and some targets more far-fetched than others.

Sportsmail runs the rule over some of the targets mentioned, how they would fit in and how they could improve United.

The midfield is a festering sore that United have simply been unable to heal in recent seasons despite spending considerable sums on the likes of Fred and Donny van de Beek.

Time and time again under Ole Gunnar Solskjaer and Ralf Rangnick they have been found wanting in this department, with the back line now afforded sufficient protection and no fluid transition to turn defence into attack.

Fred is a Brazil international and has improved but is nowhere near world class and the same can be said of Scott McTominay. Nemanja Matic is ageing and Paul Pogba is almost certain to leave this summer.

United should have addressed their issue in this position last summer but the dysfunction behind the scenes means succession planning isn’t a strong suit.

So they find themselves in a position where they’ll urgently need to shell out the better part of £100million on someone like West Ham’s Declan Rice.

His talents are undeniable and Rice is exactly what United are crying out for. Not only would he offer assurance to the defence, he would put in a shift every game and drive them forward at every opportunity.

Rice is already the heartbeat of the West Ham and England teams and, at 23, he could serve United well for at least five years and buying him would send out a strong message of the new manager’s intentions.

On the flip side, West Ham would drive a very hard bargain on the price – David Moyes has claimed it would take £150m to prise Rice away.

Also, Rice is likely to have interest this summer from clubs in next season’s Champions League. As it stands, there are no guarantees United will be playing in Europe at all.

And even if they do land Rice, there will be an immense burden on him. He’ll have to be partnered with one of Fred, McTominay or Van de Beek, at least initially.

In time, youngster James Garner, who has done well out on loan at Nottingham Forest this season, could forge a partnership with him.

United must make an attempt to sign him, though, at least as a statement of their intent to get back to the top domestically and in Europe.

Phillips has also emerged as a potential midfield option for United and wouldn’t be as expensive as Rice.

It is a nice thought to imagine the effective England midfield of Rice and Phillips replicated in United red but spending big sums on both of them in the same summer will severely limit recruitment in other areas.

Phillips would offer many of the same qualities as Rice, offering a tenacity in defensive midfielder if not necessarily the more offensive qualities.

But ultimately, that is what United are lacking in that position. Someone in the mould of a Rodri or N’Golo Kante to anchor things, particularly in the big games against Liverpool or Manchester City, when the midfield is swamped.

Kalvin Phillips, of Leeds and England, would be a very good alternative option to Rice

Given Ten Hag’s propensity to attack, someone in the Phillips mould looks even more essential.

Phillips is known to be ambitious and is certainly worthy of a move to a big six club though the boyhood Leeds fan will be well aware how contentious a switch across the Pennines will be.

United may have to move quickly, however, with Newcastle, West Ham and Aston Villa all linked with Phillips ahead of the summer.

On paper, it looks like Phillips should be the No 2 option if Rice can’t be persuaded away from West Ham. Signing both would be expensive and potentially not the best allocation of resources with so much else to fix.

Now this really would be a statement. Harry Kane is the Premier League’s best centre forward and one of the best in the world – and boy are United in need of a proven goalscorer.

Cristiano Ronaldo has led the line this season but his goal returns have hardly been spectacular and surely he won’t hang around beyond the summer if they don’t qualify for the Champions League.

Edinson Cavani’s time with the club has fizzled out miserably, Anthony Martial was sent out on loan and Mason Greenwood’s career hangs in the balance.

Rangnick didn’t exactly give Marcus Rashford a huge vote of confidence when he opted to play Bruno Fernandes as a false nine against Leicester last weekend.

So what looked like an embarrassment of attacking riches in red at the beginning of the season has come to look somewhat blunt.

A defensive midfielder should be the top transfer priority in the summer but a good centre forward who can guarantee them at least 20-a-season should follow close behind.

Everyone knows that Kane is desperate to win silverware and, at 28, it is glaringly apparent he needs to leave Spurs to do that.

His move to Manchester City fell through last summer and now once again he’s been linked with various top clubs, including United.

A fit and firing Kane next season would propel United into the title picture at a stroke. He’s not enjoying his best season by a long stretch but still has 22 in all competitions.

Daniel Levy will dig his heels in but a deal for Kane this summer, with two seasons left on his Spurs contract, looks more achievable, albeit for the thick end of £100m.

He could well prove a worthwhile investment for United and the least they can do is investigate the possibility and gauge interest.

As Ten Hag closes in on the job, reports have surfaced this week suggesting Ruben Neves ranks among the coach’s top targets for his first window.

He is apparently a ‘huge fan’ of the Portuguese and has been for many years, obviously viewing Neves as a potential midfield successor to Paul Pogba.

United have struggled to break down even modest opposition at Old Trafford this season and often creative individuals such as Ronaldo, Bruno Fernandes or Jadon Sancho have been unable to drag the team to victory alone.

Perhaps Neves could be the key to unlock things. Wolves are enjoying a positive season but his returns of four goals and two assists appear pretty modest.

Bruno Lage does, however, often deploy him in a more defensive midfield position which limits his scope to push forward.

If United do move for the 25-year-old, who has two years left on his Wolves contract, he would provide the flexibility to play in both positions.

Neves would also have an existing connection with compatriot Fernandes and Ronaldo, if he stays, and so could hit the ground running.

By that logic, if Ten Hag is really keen, it may make sense to move for Neves straight away before seeing whether the more expensive Rice or Phillips are attainable.

At least then they are covered for an extra midfielder and though Lage did warn recently that it would take a ‘big offer’ to persuade Wolves to sell Neves, he’d be cheaper than others on this list.

Neves could be a good replacement for Paul Pogba, who is expected to leave this summer

Another midfield option to emerge in recent days is Aston Villa and Scotland man McGinn, who has three goals and two assists for his club this season.

Steven Gerrard has already made it clear that McGinn isn’t for sale, even for £50m, and described him as ‘the glue to everything that’s good at Aston Villa.’

It’s certainly difficult to question McGinn’s commitment on the field and, at the age of 27, he will surely have ambitions to move to a club playing European football.

After the constant sulking and negative body language at Old Trafford this season, United are in need of players who’ll give their all.

United don’t need to sign both Neves and McGinn but someone new in central midfield to link thing together will be a fairly high priority in the summer.

United’s scouts were in Spain on Wednesday night as Arnaut Danjuma’s price tag went up another few million with his winner against Bayern Munich in the Champions League quarter-finals.

It was Danjuma’s sixth goal in Europe this season and things have certainly accelerated for the Dutchman since Villarreal paid Bournemouth £21.3m last summer.

With United and Liverpool among those tracking him, Villarreal could triple their money within 12 months as he has a £64m buy-out clause.

He failed to score in the Premier League for Bournemouth but United got up, close and personal with Danjuma’s speed and trickery in the Champions League group stages.

The winger was especially effective at Old Trafford as he terrorised Diogo Dalot back in September, setting up a goal for Paco Alcacer.

The question United have to answer is whether Danjuma offers them something fresh or much of a muchness.

Sancho, who cost them £73m just a year ago, has made the left wing position his own and it’s also where Rashford would prefer to play.

Anthony Elanga, who has enjoyed a breakthrough campaign largely on the right side, also brings many similar attributes.

It’s nice to be well-stocked with attacking players but it’s unclear Danjuma offers an upgrade on existing talent for the big outlay.

United would be better off investing in a prolific centre forward to put away the chances these wide attackers should be creating.