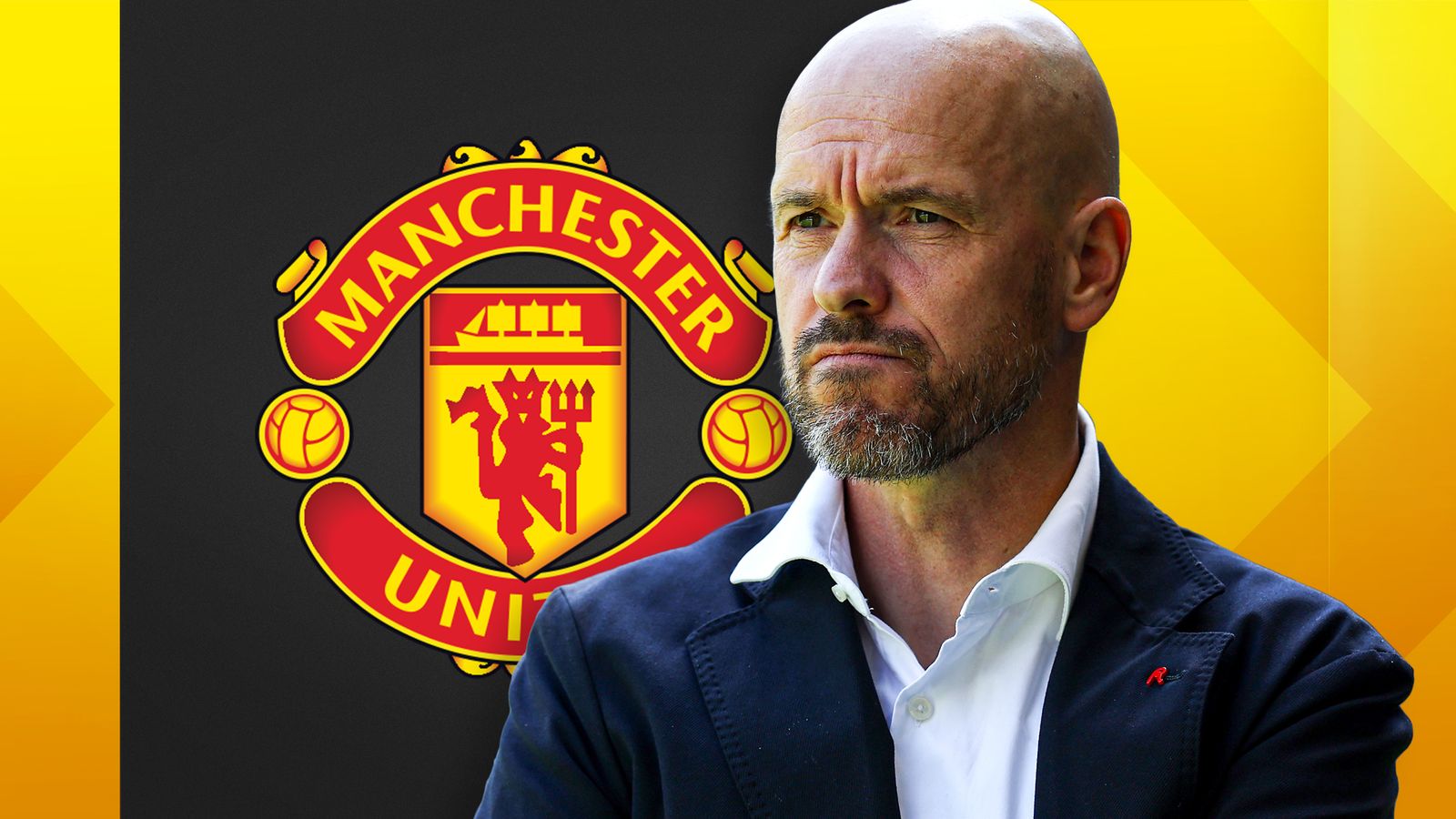 Wrapping up the Man Utd transfer news, rumours and gossip in the 2022 summer window.

Nottingham Forest have agreed a deal with Manchester United to sign Dean Henderson on loan for the 2022/23 season.

The deal will not include an option for Forest, who were promoted back to the Premier League via the play-offs last season, to buy the England international.

Henderson’s United deal expires in 2025 after he signed a new five-year contract in 2020.

Ronaldo expected to stay at Man Utd despite reported ‘frustration’

Contrary to some Portuguese reports, Sky Sports News understands Cristiano Ronaldo will be a Manchester United player for the 2022-23 season.

Cristiano Ronaldo is expected to stay at Manchester United this summer and will report back for pre-season training at the beginning of July, despite reports he is ready to quit the club.

Portuguese sports daily Record claim Ronaldo wants to leave after only one season back at Old Trafford as he fears new boss Erik ten Hag does not have the right tools to compete for titles, while he is also said to be frustrated with the club’s transfer window so far.

However, it is understood the 37-year-old is expected to return for pre-season preparations once back from his summer holidays, which will be slightly extended due to his involvement with Portugal in their three opening Nations League fixtures in June.

“When the transfer window is open, it’s normal that we talk about Cristiano Ronaldo. Manchester United are not in the Champions League next season and Ronaldo is unhappy about this.

“He is completely obsessed with playing in the competition so he’s not living well with the reality that he’s not going to be playing in it in the immediate future.

“He’s spoken to his agent Jorge Mendes, who is seeing if there are any other options. He said he would speak to the clubs who are targeting winning the Champions League to see what could be done in terms of a change in this summer transfer window.

“You can forget the English clubs – Manchester City, Chelsea, Liverpool, Tottenham – as I’m 100 per cent sure Ronaldo will not play for another club in England, while Ronaldo doesn’t fit into the new project at PSG.

“It leaves Bayern Munich as an option. There wasn’t an interest from Bayern but Mendes spoke with them and posed the question – ‘what do you think about buying Ronaldo for next season?’ Bayern were a little bit confused when Mendes offered them Ronaldo as he’s not the type of player they’d usually look for.

“When an agent offers Ronaldo, you only need to look at the sporting performance – not the age. Ronaldo has a salary of around £25m so it’s not easy for any club to afford. Mendes has asked Bayern about what they think.

“A swap with Robert Lewandowski isn’t an option as he either stays or goes to Barcelona. These are just rumours at this stage, and it’s normal when it comes to Ronaldo.”

Christian Eriksen is understood to be making a decision over whether to join Manchester United or stay at Brentford.

Both clubs have made him offers – but United’s is thought to be more financially lucrative.

Working again with Erik ten Hag, with whom he trained at Ajax before his return to football, as part of United’s anticipated new era has its attractions.

But sources close to the midfielder say he and his family are settled in London and have reservations about relocating to the North West.

“This is a significant 24 hours in the future of Christian Eriksen. It’s a fascinating story as Eriksen is deciding on two options. One is Manchester United, the second is Brentford.

“It’s strange to think that 10 years ago, United were challenging for Premier League titles while Brentford were in League One preparing for their first game of the season against Bury.

“They’re now competing in the same market for the same player. Both offers are fair, respectful and decent.

“Eriksen is really in a head-or-heart situation, weighing up the pros and cons of joining both clubs. He worked with Thomas Frank as a youngster and had a hugely successful spell there, keeping the side in the league.

“He was the heartbeat of that midfield. Brentford fans would say without Eriksen they could possibly have gone down. That’s how influential he was at the back end of last season.

“There’s a loyalty to the football club after everything that happened to him a year ago but then you have one of the biggest clubs in world football rebuilding their midfield.

“In Erik ten Hag, there’s a nice connection as Ajax allowed him to train with them during his recovery.”

Juventus have an agreement in principle to sign Paul Pogba on a free transfer following his departure from Manchester United.

Sky in Italy are reporting the length of the deal is still to be finalised. It will either be a four-year contract or a three-year deal with an option for a further year.

Pogba is expected to officially sign the contract at the start of July.

Gary Neville has expressed his concern about Manchester United‘s inactivity in the summer transfer market since Erik ten Hag’s appointment.

Rivals Manchester City and Liverpool have already brought in superstar strikers this summer in the form of Erling Haaland and Darwin Nunez.

United’s only business thus far has been the confirmation of a mass Old Trafford exodus, with Paul Pogba Jesse Lingard, Juan Mata and Nemanja Matic all leaving the club.

Who have Man Utd been linked with?

Antony – Antony is determined to secure a move to Manchester United this summer even though Ajax have tried to ward off interest in the Brazil winger by demanding a fee of £69m for his signature (The Times, June 23); Manchester United have held talks over a potential move for Ajax forward Antony but are waiting for a breakthrough in negotiations with Barcelona for Frenkie de Jong before advancing other deals (Daily Telegraph, June 21); Manchester United are closing in on their first major signing of the summer with Antony on his way from Ajax in a £40million move (The Sun, June 20).

Frenkie de Jong – Manchester United are still falling short of Barcelona’s asking price for Frenkie de Jong despite increasing their latest offer to £56m, according to reports in Spain (Daily Mail, June 23); Manchester United’s bid to sign De Jong has stalled over tough financial rules imposed on Barcelona by La Liga (Daily Mirror, June 21); The mood emanating from United is bullish in regards De Jong’s arrival, the belief firmly being that it is a case of when not if (The Guardian, June 20).

Yannick Carrasco – Manchester United, Chelsea and Tottenham are exploring the prospect of signing Atletico Madrid star Carrasco this summer after his release clause emerged, according to reports in Spain (Daily Mirror, June 23).

Jurrien Timber – Manchester United might have fresh hope of completing a deal for Ajax starlet Timber after all with his agent in Manchester (Daily Mirror, June 22); Timber is set to become the latest Manchester United transfer target to reject the club with the Netherlands international expected to stay at Ajax this summer (Daily Mirror, June 18); Timber looks set to agree a new deal to stay at Ajax (The Sun, June 17).

Vinicius Jr – Manchester United were among the Premier League sides to enquire about the availability of Real Madrid forward Vinicius last season, according to reports in Spain (Daily Express, June 19).

Denzel Dumfries – Manchester United are interested in signing Denzel Dumfries from Inter Milan, with the Serie A side ready to sell (Daily Express, June 13).

Milan Skriniar – Manchester United and Tottenham have been dealt a huge blow after Skriniar committed his future to Inter Milan as he outlined his career plan (Daily Express, June 2).

Corentin Tolisso – Manchester United and Arsenal could be among the sides readying an offer for midfielder Tolisso, who will be leaving Bayern Munich on a free transfer this summer (The Sun, June 1).

Pau Torres – Villarreal centre back Torres insists that the only contract offer he has received is from his current club as rumours swirl amid reports his agent has arrived in the UK ahead of a move to United (Daily Mail, May 30).

Sven Botman – Manchester United and Tottenham are understood to be involved in the race to sign Lille defender Botman, a long-term target for Newcastle United. (The Sun, June 9).

Wesley Fofana – Leicester City are attempting to fend off interest from Manchester United and Chelsea in their centre-back Fofana. (Daily Express, June 9).

The latest players linked with a Man Utd exit

Cristiano Ronaldo – Ronaldo is expected to stay at Manchester United this summer and will report back for pre-season training at the beginning of July, despite reports he is ready to quit the club (Sky Sports News, June 24); Ronaldo has reportedly demanded Manchester United up their game in the transfer market – or he’ll leave Old Trafford this summer (Daily Mirror, June 23); Ronaldo is reportedly concerned about a lack of transfer activity from Manchester United and could even leave the club before the end of the window (Daily Star, June 22); Ronaldo has insisted he is “very happy” to remain at Old Trafford and believes Manchester United will rebound from a dreadful 2021/22 campaign under new manager Erik ten Hag (Sky Sports News, June 3).

Brandon Williams – Williams can leave Manchester United for £10m as the defender is deemed surplus to requirements at Old Trafford (The Sun, June 22).

Marcus Rashford – Erik ten Hag will reportedly back Rashford to revive his Manchester United career (The Sun, June 19); Rashford has expressed a desire to stay at Manchester United and fight for his place in Erik ten Hag’s team after falling down the pecking order under Ralf Rangnick (Daily Mail, June 13). United have turned down an approach from Tottenham for England forward Rashford (The Times, June 9).

Paul Pogba – Pogba is using his post-season break in the USA to mull over offers from Juventus, Real Madrid and Paris Saint-Germain after his Manchester United exit was confirmed (Sky Sports News, June 4).

Edinson Cavani – Cavani appears set for a move to Mexico on his release from Manchester United, with three teams – Club America, Toluca and Monterrey, all interested in the Uruguay striker (Daily Mirror, June 10).

Martin Svidersky – Manchester United academy star Svidersky has confirmed he will leave the club and join a top-flight club in Spain after turning down the chance to work under new manager Erik ten Hag as part of his Old Trafford revolution (Daily Mirror, June 4).

Facundo Pellistri – Erik ten Hag is set to give Facundo Pellistri a chance to shine during Manchester United’s pre-season schedule, with his long-term Old Trafford future in question after a loan spell at Alaves when he struggled to get much playing time (Daily Mail, June 14).

What do we know about Man Utd’s summer plans?

Manchester United will adopt a “try before you sign” policy with their youngsters this summer (Sun on Sunday, June 19).

Manchester United boss Erik ten Hag has sent an email to his players laying down the law to remind them football a team game and he will not tolerate egos as he plans to instil a Sir Alex Ferguson-style discipline at the club (The Sun, June 10)

Erik ten Hag will have £120m to spend on Manchester United’s squad this summer but could increase that by offloading the likes of Anthony Martial, Eric Bailly and Aaron Wan-Bissaka (Daily Express, May 30).

Keep up-to-date with all the latest transfer news and rumours in our dedicated Transfer Centre blog on Sky Sports’ digital platforms. You can also catch up with the ins, outs and analysis on Sky Sports News.