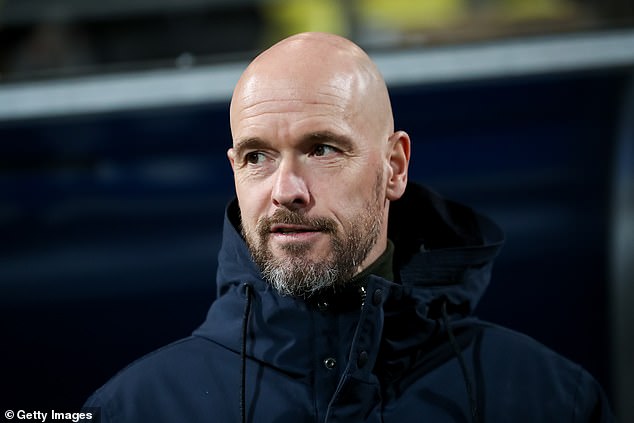 By Sami Mokbel for MailOnline

Manchester United have held formal talks with Ajax to establish the full terms of Erik ten Hag’s release, with an agreement to appoint the Dutchman described as ‘close’.

The Dutchman is as emerging as a leading candidate to become the club’s new permanent head coach along with Mauricio Pochettino and United have taken a significant step towards Ten Hag’s appointment.

Sources have told Sportsmail that United officials have made contact with their Ajax counterparts to discover what will be required to remove the highly-rated coach from his contract, that expires at the end of next season.

Ajax will be due just over £ 1.6million in compensation for Ten Hag, but that will likely go beyond £ 2m with members of his backroom team that will accompany him to Old Trafford.

Those discussions took place towards the end of last week and provide a major indication that United are now ready to press the button on Ten Hag’s appointment.

Indeed, sources have told Sportsmail that a deal for Ten Hag to join United is ‘close’, though several parties close to the situation were keen to stress that a full agreement has not been reached.

The total compensation for Ten Hag is unlikely to be an issue for United.

Sportsmail exclusively revealed Ten Hag was a serious contender for the job in November before breaking the news of his formal interview for the post last month.

Reports also claimed that the reason Pochettino has fallen behind in the race to be selected for the role was due to PSG’s struggles this season and the fact it would cost considerably more to release the Argentine from his contract in Paris, which he still has 12 months left on.

The former Spurs boss is expected to leave the French club at the end of the season regardless of how their campaign ends, with Zinedine Zidane and Antonio Conte among the managers interesting the Ligue 1 side.