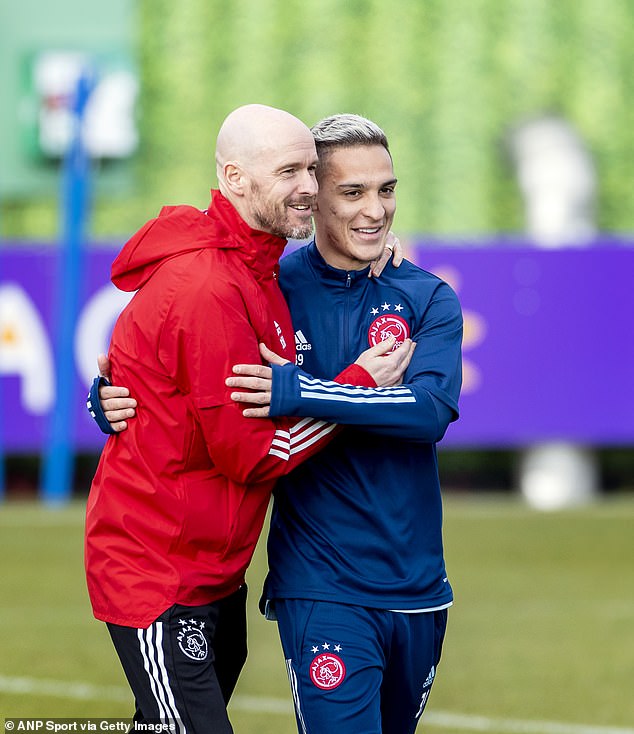 By Julian Bovill For Mailonline

Brazilian forward Antony’s representatives are reportedly in Europe trying to thrash out a deal with Manchester United.

Antony, who played for two years under Erik ten Hag at Ajax, is believed to be valued at around £ 51m by the Dutch club.

According to Goal Brasil, the player’s representatives have flown to Europe to try and speed up a potential deal with the player believed to keen on a move to England to link up with his former boss.

Ten Hag, who has already started work at Manchester United, is embarking on a difficult rebuild at the club this summer after a season in which much of the squad struggled to live up to the standards expected at the club.

A number of players, including Paul Pogba, Jesse Lingard and Nemanja Matic, have already announced they will be leaving the club this summer with others expected to follow them out of the door.

This leaves room for the club to make a move for Antony, who it is claimed could be the first signing of the Ten Hag era.

The report from Goal Brasil say that the intention of his representatives’ trip to Europe is to try and close a deal, which they intimate could lead to the player’s future being decided in the next few days.

In addition to Ten Hag being a strong negotiating chip for the club, the relations between Manchester United and Ajax are said to be strong.

Injuries ended his season early, but his 12 goals and ten assists in 33 games impressed the Ajax faithful in a championship-winning campaign

Edwin van der Sar, a legendary figure at both clubs and now a senior football executive with the Dutch club, is believed to be a key part of those strong relations.

It has previously been claimed that Donny van de Beek’s signing from Ajax two years ago was resultant upon those strong relations.

Antony endured a tough end to the season, having suffered an ankle injury that kept him sidelined from April onwards.

However, prior to that he had enjoyed a stellar campaign in Amsterdam. The Brazilian scored 12 goals and provided ten assists across 33 games in all competitions for the Dutch champions.