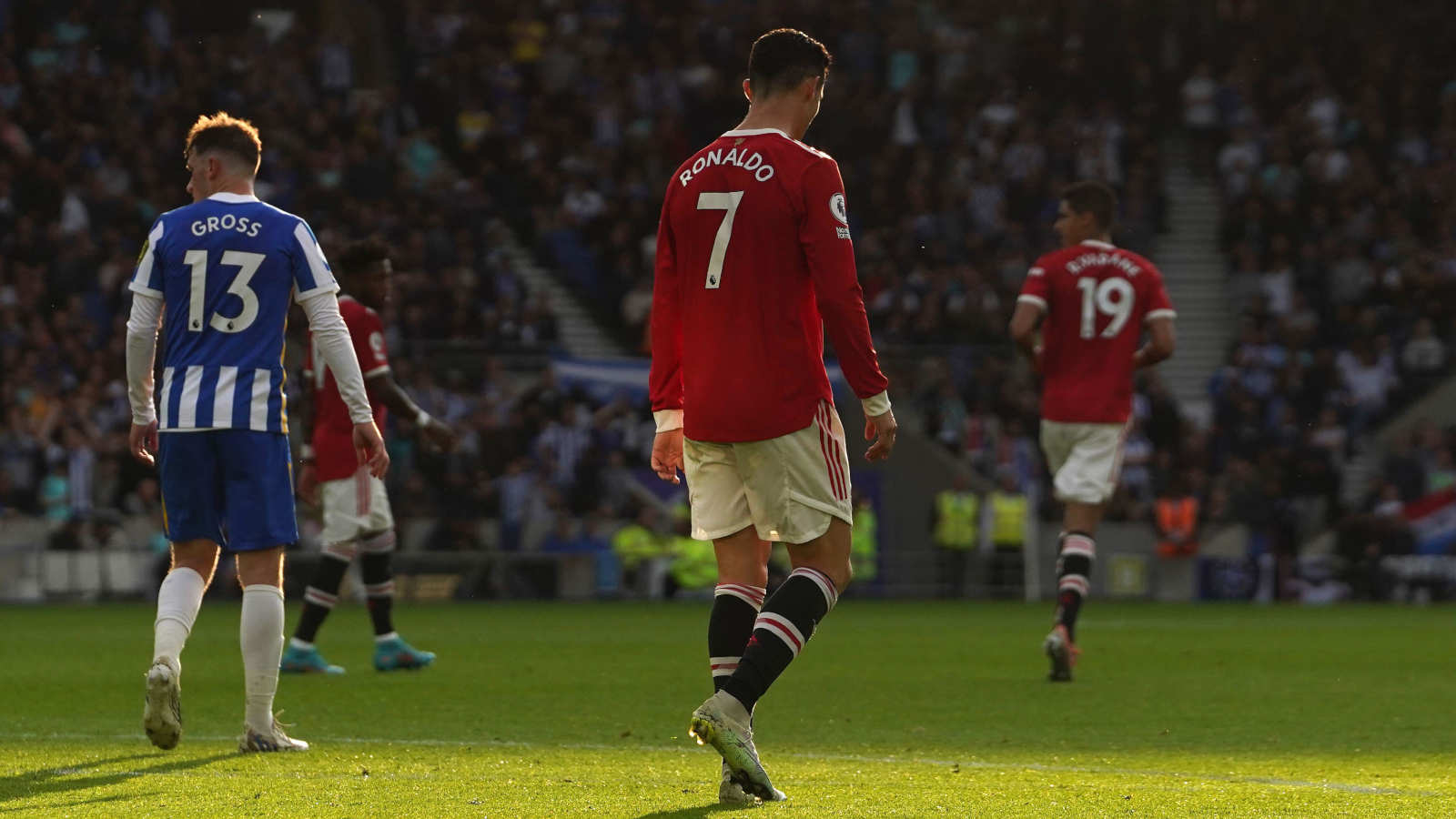 Manchester United are halfway through their two-year contract with Cristiano Ronaldo, but will Erik ten Hag have a use for him next season?

“Manchester United were an embarrassment to their football club today,” said Alan Shearer on Saturday night’s Match of the Day, apparently furious on behalf of United supporters following their team’s 4-0 shellacking at Brighton earlier that evening. Gary Lineker interjected. “I think there’s one person this season who comes out of it with any kind of credit – apart from De Gea, who’s been excellent at times – is Cristiano Ronaldo. I do not think he can believe what he is seeing. ” Jermaine Jenas was in full agreement with Gary. He’s played in some great teams, let’s be honest, he’s probably just thinking, you know, ‘What is this? What is going on here? This is a crazy part of my career, and all he could do was laugh at the time. It does not mean anything, he’s just very upset. ”

He certainly had every reason to look unhappy. This was not just that mild feeling of humiliation at losing to ‘teams like Brighton’ with which Manchester United have become rather too familiar this season. This was a new depth plumbed, a defeat that shone a very harsh light on the differences between a club of relatively modest resources and a plan versus a team which can summon up money at the click of the fingers but which has repeatedly been found repeatedly wanting in even the most basic of organizational senses.

Manchester United weren’t just bad against Brighton; they were season-definingly bad, and that’s saying something when we consider, say, their 5-0 home capitulation against Liverpool or their 4-1 defeat at Watford. It was the fifth time they’ve conceded four goals in the Premier League this season, a record which would surely be considered unacceptable were they 16th in the Premier League, never mind sixth.

At this stage in his career, Cristiano Ronaldo can feel like a blank canvas onto which anybody can project their broader feelings about the state of Manchester United, or indeed the game in general. Ronaldo was pretty much as invisible as the rest of the United team at Brighton on Saturday evening, but the camera continues to gravitate towards him and there remains a tendency in the media to zoom in on one Ronaldo facial expression in an attempt to try and disentangle the mess that the club has become.

As the Manchester United dressing room retains the watertight capabilities of the Titanic, there had to be a leak from somewhere within the Old Trafford rabbit warren on the matter. ‘Cristiano Ronaldo tells Man Utd team-mates he WILL stay despite nightmare season… if new boss Erik ten Hag wants him,’ said The Sun. after the dust had settled, a story that says as much about the ongoing internal politicking within this uniquely rudderless club as it does about the reality of whether it would actually be a good idea for him to stay and see out the second year of his contract .

It’s not that Ronaldo has had a bath season with Manchester United. He’s scored 18 goals in the Premier League, and will almost certainly finish the season as one of only two players in the entire squad to reach double figures alongside Bruno Fernandes.

And there have been times when his goals have been the last vestiges of glue holding this fundamentally dysfunctional squad together. Between United’s 4-2 win at Leeds on February 20 and their 3-0 win against Brentford on the May 2, United scored ten goals in nine Premier League matches and Ronaldo scored eight of them, including two hat-tricks. And when he stopped scoring earlier in the season, their results dried up too. They lost five games in seven between the end of September and late November, and he only scored in one of those seven matches.

But for all of this, it is really such a great idea to continue with him for the second year of that contract, even if he does want to stay? Everybody agrees that Manchester United need a clear-out; that much has been obvious from their performances for much of this season. And it seems reasonable to ask, despite the goals, it is sustainable to allow the 37-year-old who can not really press anymore to lead the front line for another season?

When he re-signed for the club at the end of the last summer transfer window, few doubted that Ronaldo would be able to pad out his personal statistics at Old Trafford. But it was not difficult to see the potential for parallels with what happened to Juventus when he went there in 2018, either. Ronaldo’s personal figures remained as excellent as ever in Turin – prior to this season, he’d only previously failed to score 25 league goals in a season once in the 12 years that he was away from Old Trafford – but Juventus did not get any closer to winning the Champions League while he was there. Juve seemed keen to get his wage bill off their books by last summer’s transfer window.

In the gegenpressing, highly physical world of the Premier League in 2022, there have been points at which Ronaldo has looked as much like a fish out of water as anybody else in the Manchester United team. And there remains a fundamental point to be considered here. One of the biggest criticisms of the club in recent years has been that United have frequently seemed too in thrall to the past to be successful in the present. The cult of the manager has been a significant manifestation of this debilitation, a belief that a magical man who ‘gets the club’ can arrive from out of nowhere, as Matt Busby and Alex Ferguson did, and make everything okay with the wave of a magic wall.

Cristiano Ronaldo in 2022 is another manifestation of this condition. He’s a blast from the past, a visual reminder of what Manchester United used to be, of the cold fear that they used to impose upon others through their own force of will. But Ronaldo is not as mobile as he used to be, and it’s extremely difficult to see how Ten Hag would be able to accommodate him in the team. He’ll be 38 by this time next year, and if Manchester United are where they want to be, he’d be preparing for their most important games of the season.

But he’s also a manifestation of their present. Even at £ 12.85m down, £ 26.52m over the next two years (with an option to extend) and more, he’s done wonders for their social media clout, has sold a bunch of shirts, and chipped in with a few goals, and this in itself tells the story of Manchester United’s most fundamental problem; they’re two-thirds business and one-third a football club. Manchester City are expected in the next few days to close the signing of Erling Haaland, the frighteningly talented best young player in the world. Liverpool brought in Luis Diaz during the January transfer window for € 45m plus € 15m in add-ons. At Manchester United, the single biggest question right now is whether Cristiano Ronaldo, their 37-year-old main goalscoring treat, should stay another year.

There is a scenario in which it could happen and work out. If Ten Hag could offer him a coaching position and ask him to take a back seat from playing, perhaps finding a new role as a squad player or impact substitute, he could channel those years of winning experience into others. There are, after all, few other people at Manchester United with significant recent experience of that. In this scenario, they would need a new striker, but all of this pre-supposes that big changes and a wholesale clear-out were to come. But would Ronaldo want to do this? Does he have sufficient passion for the game that extends beyond himself? And does he have the skillset to be an elite-level coach? Because that’s the level to which Manchester United should be aspiring.

At The Amex, the truth was laid out starkly before them. Exactly 11 years ago to the day, Brighton & Hove Albion played their last match at The Withdean Stadium, the run-down athletics track that they’d been using as home for the previous 12 years. Despite getting beaten 3-2 by Huddersfield Town, they were promoted from League One as champions in front of a crowd of 8,416. The following day, Arsenal beat Manchester United 1-0 at The Emirates Stadium, but United were the Premier League champions within two weeks regardless. It was their sixth Premier League title in 11 years.

Over the 11 years since, Brighton have been tended to life by an owner who is a fan of the club, built a new stadium, and a team that has continued to blossom and is now becoming an established Premier League club under a head coach with a plan. They’ve gone from first in League One to the top half of the Premier League. Manchester United, on the other hand, have spent that time owned by people for whom football is a throughput to money, and the result has been slowing to a point of almost complete stagnation and eventual incremental decline, with a temporary manager and players who simply do not seem to care.

If Erik ten Hag is allowed to make a free decision for footballing reasons to keep Cristiano Ronaldo for next season, then excellent; Ten Hag knows the game and knows what he wants. But the risk comes if he is not allowed to make that decision, or if that decision is taken for reasons other than the betterment of Manchester United’s footballing arm. Whether this reunion has been a success or a failure probably depends on your own prejudices, but if Manchester United do wish to significantly improve upon their 2021/22 showing, both parties may need to agree that their relationship at least needs to change.