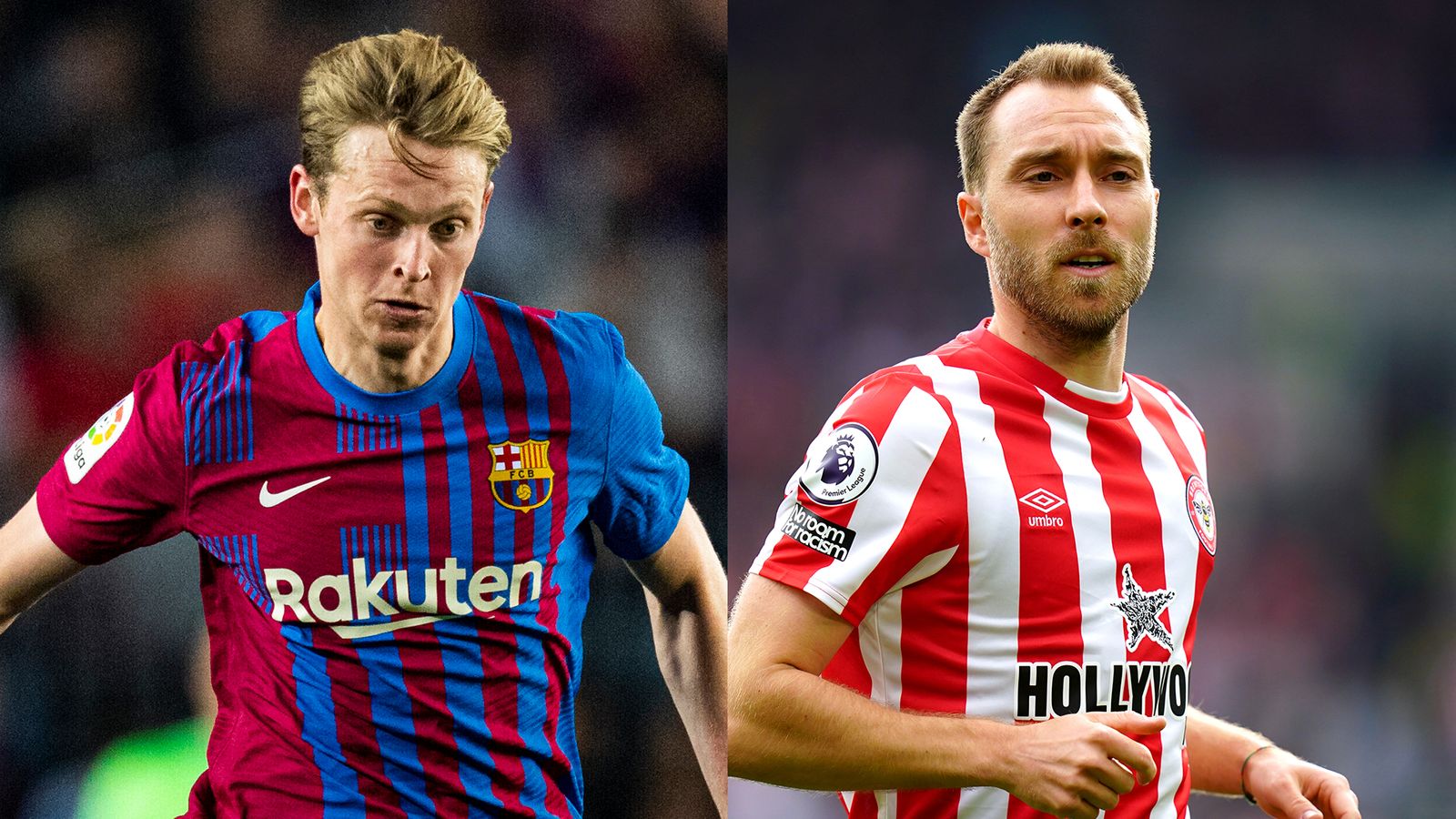 Manchester United remain comfortable in their position regarding a potential deal for Barcelona midfielder Frenkie de Jong, while the signing of Chrisitan Eriksen is ‘progressing positively’.

United have a “broad agreement” with Barcelona on the fee – believed to be € 65m (£ 56m) plus performance-related add-ons.

Chief executive Richard Arnold and football director John Murtough continue talks with Barca officials over the transfer, but it is a problematic deal to do as De Jong has backdated wage issues. It is thought he is owed £ 17m after taking a pay cut during the pandemic.

What’s the latest on De Jong?

Barcelona president Joan Laporta has said De Jong is not for sale, but has admitted his salary would need adjusting.

Laporta said: “[Frenkie De Jong] is a Barca player. And unless we feel the need or the interest to sell him we will not do it. Frenkie de Jong isn’t for sale. We know he has offers. And if at a given moment we are interested in selling him then we would think about it.

“But right now we will not sell him.”

De Jong made 46 appearances for Barcelona last term and has four years remaining on his current contract at the Nou Camp.

The Netherlands midfielder played under new United boss Erik ten Hag at Ajax and was part of the squad that completed the Eredivisie and KNVB Cup double during the 2018/19 campaign, as well as reaching the Champions League semi-finals.

While Man Utd believe De Jong is open to a move to Old Trafford, they are also looking at other options too.

Central midfield is the number one priority position that United are looking to strengthen this summer.

The stylish midfielder does his best work from deep, stepping past challenges or threading a pass through the lines to move his team up the pitch.

He rarely gives the ball away. He had a 91 per cent passing rate in La Liga last season and, as well as that metric, also eclipsed McTominay and Fred in stats measuring dribble success, touch quality and how often they are dispossessed.

De Jong may not be the sole answer to United’s problems but he would bring an upgrade to their central midfield department and unlock a way of playing Ten Hag desires.

Meanwhile, Sky Sports News has been told the deal to bring Christian Eriksen to Manchester United is “progressing positively”.

A three-year deal has been agreed and it will be formally signed off once Eriksen completes his medical at Old Trafford.

The Denmark international was mulling over offers from United and Brentford, but has decided to join up with Erik ten Hag at Old Trafford.

Eriksen worked with Ten Hag when he trained with Ajax as part of his return to football following his cardiac arrest while playing for Denmark at Euro 2020.

United were patient in their pursuit of Eriksen and put no pressure on the midfielder for a decision, as they understood his choice would be based on more than just football.

Eriksen was settled in London with his family at Brentford, but has been attracted by the prospect of working under Ten Hag and being part of United’s new era under the Dutchman.

The gap in valuation between the two clubs still exists but there is belief the player, who has also been linked with a move to Arsenal, wants to move to Old Trafford.

However, United will not overpay for the Argentina international.

Erik ten Hag confirmed on Monday bringing in another forward is a priority for United, but again, no deal is close as there is a gap in the valuation of the player between the two clubs.

United are willing to listen to offers for Ronaldo this summer, Sky Sports News understands, but the club’s public stance remains that he is not for sale.

Ten Hag says Cristiano Ronaldo, who has one year remaining on his United contract, is in his plans for the season ahead and expects him to stay at the club.

The United boss said: “We are planning with Ronaldo for this season – that’s it. I’m looking forward to working with him.”

Asked if Ronaldo wants to leave, Ten Hag replied: “He has not told me this. I have read, but as I say, Cristiano is not for sale, he’s in our plans and we want to get success together.

“I spoke with him before this issue came up. I had a conversation with him and had a real good talk.”

However, it is understood Ronaldo’s camp will continue to look for offers despite Ten Hag’s insistence the Portugal international will stray at Old Trafford.

Manchester United manager Erik ten Hag reiterated that Cristiano Ronaldo is not for sale and is in his plans for the coming season.

What should Manchester United do this summer?

“Where do you start?

“Restoring Manchester United back to the lofty heights of yesteryear is a task too great to be completed in a single season, but the fanbase are well within their rights to demand progress towards that ultimate target.

“The opportunities for newly-appointed manager Erik ten Hag and CEO Richard Arnold to deliver just that are myriad.

“United can hardly be accused of failing to invest on the pitch having weighed out more than £ 1billion on transfers in the past decade, but United rank among Europe’s worst in terms of value for every pound spent.

The Athletic’s Sam Lee breaks down the various tasks new Manchester United manager Erik ten Hag must complete with the club, saying the Dutch coach has a ‘big job on his hands’ to turn them around

“In their first season together, Ten Hag and Arnold must seize the opportunity to devise a new transfer strategy, execute it successfully, and take the first steps towards re-establishing the famed partnership which underpinned Sir Alex Ferguson and David Gill’s spell together.

“Players brought to the club must understand the privilege of pulling on a Manchester United shirt and, crucially, have the ability to transfer that into performances on the pitch, while those already at the club must be set an ultimatum of demonstrating their understanding.

“Achieve that, and United should be able to prevent the crippling sense of apathy from further engulfing Old Trafford, and the club will have taken its first step back towards the top table of English and European football.”

Keep up-to-date with all the latest transfer news and rumors in our dedicated Transfer Center blog on Sky Sports’ digital platforms. You can also catch up with the ins, outs and analysis on Sky Sports News.

Erik ten Hag’s first Premier League game as Manchester United manager will be against Brighton at Old Trafford, live on Sky Sportson the opening Super Sunday of the 2022/23 season.

After facing Graham Potter’s Seagulls on Sunday, August 7, live on Sky Sports, United travel to Brentford in the second round of fixtures before hosting rivals Liverpool in a blockbuster early-season clash on August 22, live on Sky Sports.

United’s trip to the Etihad Stadium for the first Manchester derby of the season on October 1 kicks off a daunting month which sees Ten Hag’s side travel to Everton and Chelsea and host Tottenham, Newcastle and West Ham.

The final game before the season breaks for the winter World Cup will be against Fulham on the weekend of November 12/13. United then return to action on Boxing Day at home to Nottingham Forest.

2023 will be ushered in by a home match against promoted Bournemouth. Premier League champions Manchester City are next up at Old Trafford on January 14, the return trip to Anfield on March 4, while United conclude their season at home to Fulham on May 28.