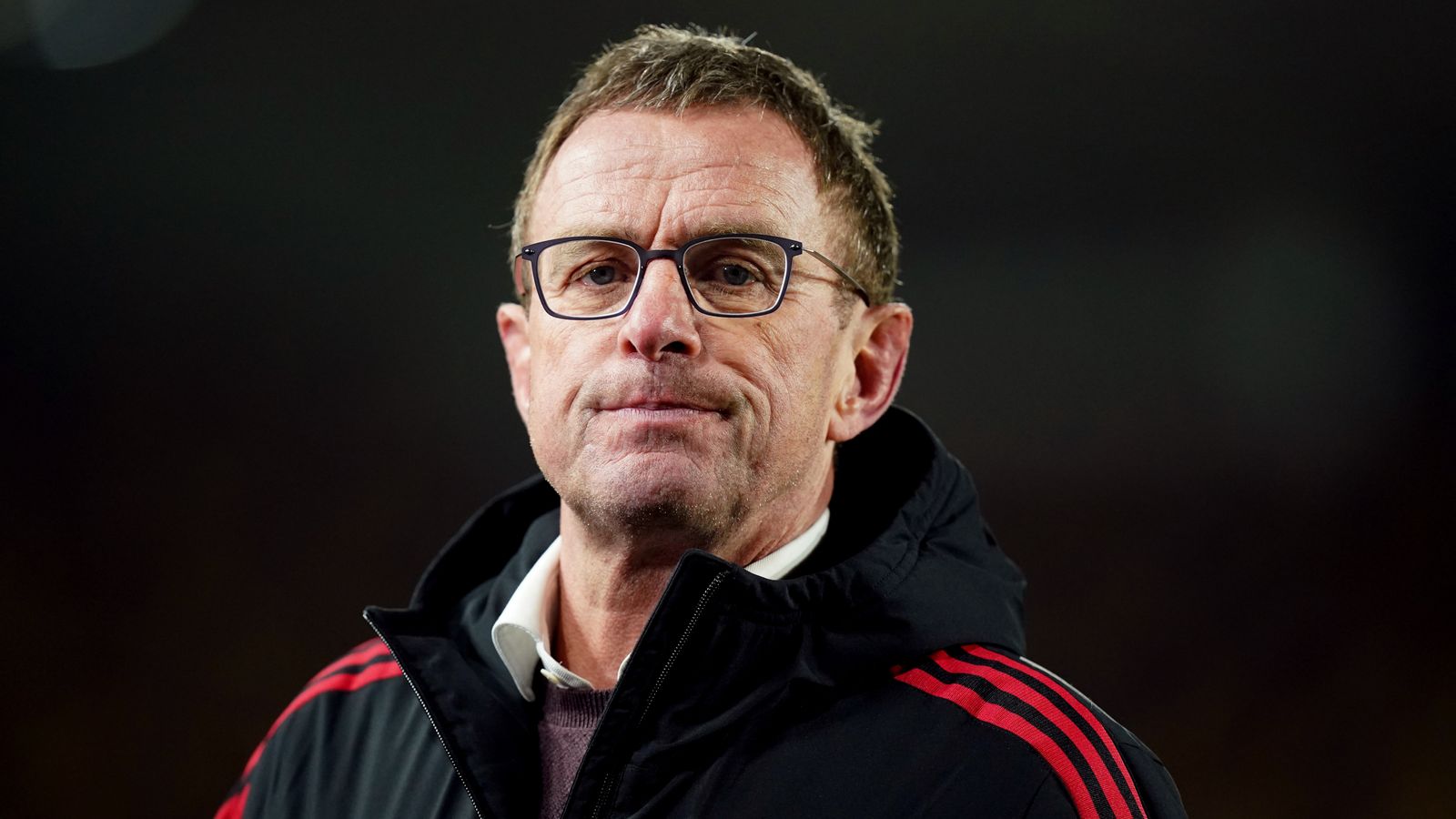 Ralf Rangnick has admitted that he can understand why Manchester United fans are so “disappointed” after a group of them carried out a protest against the Glazer family at the club’s training ground on Friday.

A group of supporters unfurled a banner against the Glazers, who have owned the club since 2005, at United’s Carrington training base ahead of Rangnick’s press conference.

The protest is one of many against the American family since they arrived at Old Trafford, and comes with United struggling to earn a place in next season’s Champions League, with a six-point gap between them and fourth-placed Tottenham and only seven matches remaining .

Speaking ahead of Saturday’s Premier League fixture against bottom-club Norwich at Old Trafford, Rangnick said: “We all know that football is a game of passion and emotions.

“I think we can all understand, and I can understand, that our supporters are disappointed, both about where we stand in the table but also about performances.

“As I said, emotionally, I can understand why they are disappointed.”

United released a statement on Friday afternoon saying: “There was a small and peaceful protest outside the Carrington training ground today.

“We respect the opinions of fans and remain committed to strengthening our engagement with them.”

United are nearing the end of a season of uncertainty, with Rangnick filling the manager’s role on an interim basis since November, but the appointment of Erik ten Hag as the German’s replacement is understood to be all but done.

However, Ten Hag is currently overseeing Ajax’s bid to win the Dutch title and cup, and Rangnick said it “does not make sense” for him to discuss the Dutchman’s potential move to the Premier League.

“I do not know if it’s a done deal,” Rangnick insisted. “My focus is on the game tomorrow against Norwich.

Rangnick blames form on striker woes and lack of ‘balance’

United go into Saturday’s game on the back of just one win in their last seven matches, and Rangnick cited the injuries to Edinson Cavani, the departure of Anthony Martial and the unavailability of Mason Greenwood as reasons why he thinks his side have struggled to sustain good performances.

The 63-year-old – who also suggested his side lack “balance” – said: “Without using it as an excuse, we have lost a few players. Since the West Ham game [1-0 win, January 22] we lost three of our strikers. Right now, we are missing quite a few other players.

“This is probably one of the reasons, but it’s also that we are not sustainably playing at the highest possible level. I think we reduced the amount of goals we concede, but in the last couple of games we were struggling to score ourselves.

“But this has not always been the case – we scored three goals against Tottenham, for example. It’s about finding the best possible balance between what is necessary as a team to defend our own goal.”

It was put to Rangnick that his players lack motivation, particularly in the wake of their dismal 1-0 defeat at relegation-threatened Everton last weekend, but he suggested their failure to score at Goodison Park could be attributed to low levels of confidence, rather than motivation.

FREE TO WATCH: Highlights from Everton’s win against Manchester United in the Premier League

“It [motivation] should not be a problem at a club like Manchester United – the players should always have an eternal level of motivation, “said Rangnick.

“But if I look at the Everton game, until that first shot we were in control of the game. That changed the atmosphere at the stadium but it also changed a little bit our energy level, and this is what should not happen, even if you concede a goal.

“That can happen in football, with a deflected shot, but you should still be aware that we are the better team, we have better players and we can dominate the game.

“But it was not the case and it got to do, probably, with confidence – you may call it motivation.”

Ahead of the Norwich visit, Rangnick revealed Luke Shaw may be out for the remainder of the season after undergoing surgery to remove screws in his leg, while Raphael Varane, Edinson Cavani, Scott McTominay and Fred are all also unavailable.

Gary Neville tells The Overlap that the Glazers have a list of things they need to do to rejuvenate the club and reset the culture at Old Trafford.

Speaking at a Sky Bet fan debate on The Overlap last month, Gary Neville set out a five-point plan for the Glazers to “reset the culture” at United.

Supporter opposition to the owners was increased by their ill-fated attempt to include the club in the European Super League last year, and Neville admitted that fiasco was a turning point in his relationship with the Glazers.

However, the former United defender believes they can start to get the fans back on side if they commit to a number of changes at the club – including building a new stadium.

Neville said: “I’m really worried at this moment in time. I’d never gone for the Glazer family whilst I was at the club. I saw no reason to – we were successful.

“The Super League was a moment for me where all those owners demonstrated complete and utter greed and disdain for English football. They were willing to ruin it on behalf of their own interests.

“My view is there is a problem right at the very top. They’ve had 10 years to prove they can be good football operators beyond Sir Alex Ferguson and David Gill (former chief executive), and they’ve proven they can not do it.

“The first thing that should happen is they should sell the club, because of the Super League, because of their 10 years of failure without Ferguson and that team that he had. But if they really want to stay – because you can never force the Glazer family to sell – then they’ve got to do four or five things.

“Number one, they’ve got to stop taking the dividends out of the club if they want to reset the culture. When the owners are pulling money out of the club at the expense of a successful team, it’s a bad message from the very top.

“Number two, they’ve got to pay off that debt and they can do that by selling £ 500m worth of shares to the fans. They can then rebuild that stadium with a billion quid. It does probably need knocking down to be fair.

“That does not need renovation, it needs a new stadium, and that money can be funded from a 20-year contract with a sponsor at £ 60m, £ 70m a year. Call it ‘something Old Trafford’ and we have a brand new stadium that resets the culture of Manchester United, where we have the best stadium in the world.That needs to happen.

“They then need to build a new training ground. Me and Roy (Keane) were part of the squad when we moved 22 years ago. We were devastated to leave The Cliff, but we’ve now got a training ground that’s behind the other training grounds.

“They then need to go and put £ 100m, £ 150m a year into a proper sporting project, along with those four things, and then you can say ‘the Glazer family have reset the culture of the club’. The fans are on the edge again. “