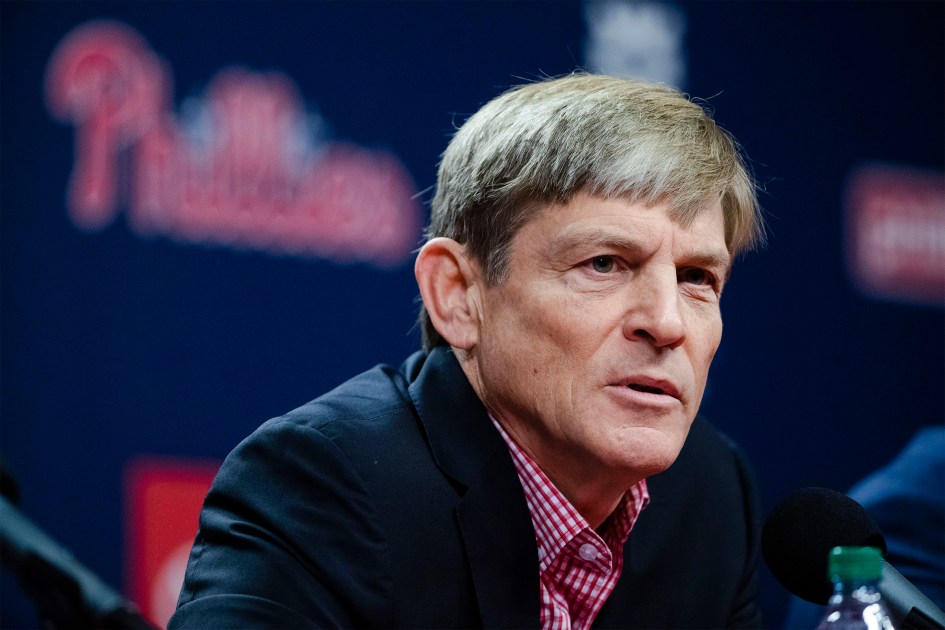 John Middleton, primary owner of the Phillies, was born into wealth. The heir to a tobacco fortune, he is now worth over $ 3.4 billion dollars.

To put that into perspective, if you made a million dollars annual starting now, you too could be worth that much – by the year 5422. But $ 3.4 billion, most of it inherited, apparently is not quite enough for John.

He and the other Major League Baseball owners are locking out the players and putting the 2022 MLB season in jeopardy.

A lockout dragging into spring is depressing at the best of times. These are not the best of times. We find ourselves exhausted after two years of a global pandemic, obnoxious political discourse, rising crime, and war breaking out across the Atlantic.

In previous times of turmoil in the US, there’s always been baseball, a civic good when a nation’s needed it. No longer.

Baseball first entered the national consciousness in the depressing aftermath of the Civil War. Harper’s Magazine covered a championship between Philly and Brooklyn a year after Appomatox, and five years later the Athletics were one of the original franchises in the first pro league.

Racial norms were also changing in the 1860s, and Philadelphia Renaissance Man Octavius ​​Catto saw baseball as an instrument for equality. So when he was not fighting (and winning) for the right to integrate the city’s street cars, he was starting a black baseball team that challenged – and in many cases, defeated – better funded white teams.

During World War I, baseball games were often combined with Liberty Bond drives. Former Phillie Eddie Grant in 1918 became the first former player killed in action, falling in a battle in the Argonne Forest in France. Yet the games went on, one of the few things the nation had to enjoy as war and then the Spanish flu decimated both the world and the nation.

Baseball again rose to the occasion in World War II. In 1941, Phillies pitcher Hugh Mulcahy became the first MLB player drafted into the armed forces. He would serve four years in the Pacific. In 1945, he contracted dysentery and lost 30 pounds, essentially ending his baseball career. He was but one of 500 major league baseball players to serve their country during that war. Over 200 Negro League players did so as well, including 22 members of the Philadelphia Stars. A month after Pearl Harbor, MLB owners asked FDR if they should cancel the 1942 season, but FDR bid them continue and offer the nation a much needed respite from the depressing dreariness of daily bad news.

More recently, the country was gutted by the events of 9/11, and spent much of the following 6 weeks in a haze. But that year’s World Series, between the Yankees and the D-Backs, made us smile again, laugh again, and cheer again, all the way up until the final at bat in Game 7.

Juxtapose that with the current day: billionaires, who have really been the only beneficiaries of the past two years, watching their fortunes skyrocket while the rest of us hang on for dear life, have decided they’re not making quite enough and are shutting down the game.

Philly taxpayers may have paid $ 229 million to get Citizens Bank Park constructed, but our billionaire masters have locked the gates shut to prevent games from being played in them. “Thanks for the ballparks, now eat cake.”

A few months before he died, WWII vet and former Phillie Mulcahy was asked if he was cheated by serving over four years in military service. He replied, “I do not look back on it with any anger or bitterness. Our country was at war, and that was more important than baseball. There were a lot of guys who had their careers interrupted because of the war… I feel I was fortunate, not cheated. ”

That the same sport is now run by men – and the owners are nearly all men – who feel cheated because they can not get from $ 3.4 billion to $ 3.5 billion seems a cruel irony.

War couldn’t stop baseball. Neither could terrorist attacks. There’s only one thing that can stop baseball: a pitiful collection of robber barons throwing a temper tantrum.