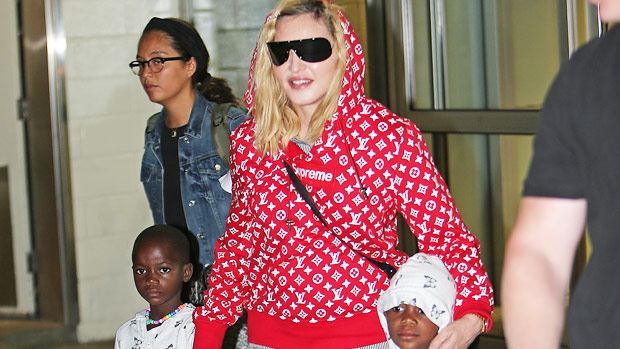 Madonna’s kids are growing up so fast! On Dec. 5, it was all about daughters Mercy, 16, Stella, 10, and Estere, 10, who had a piano recital that Madge attended. Madonna took to her Instagram story to share videos of the girls playing the ivory keys. “The gift of music brought to you by Mercy, Estere and Stella,” she proudly captioned the videos. After the performances were over, she posed for a family photo with all three girls, as well as a solo shot with Mercy.

The kids got dressed up for their big performances, with the twins sparkling in their long-sleeved dresses and Mercy looking stunning in her short-sleeved green dress. Meanwhile, Madonna rocked a skirt, tight black top and fishnet tights, with her hair styled in pigtail braids. The holiday-themed piano recital featured solo performances, as well as duets.

Madonna adopted Mercy after her 2008 divorce from Guy Ritchie. In May 2009, she applied to adopt the then three-year-old from Malawi. She and Guy had previously adopted their son, David Banda, in 2008 after applying to do so two years prior. Meanwhile, Stella and Estere were also adopted from Malawi when they were five years old (in 2017). Additionally, Madonna has two biological children — her oldest daughter, Lourdes Leon, whose father is Carlos Leon, was born in 1996, followed by a son, Rocco Ritchie, who she shares with Guy, in Aug. 2000.

While it definitely seems like Mercy, Stella and Estere may be following in their mom’s musical footsteps, they’re not the first kids in the family to show a knack for performing! Lourdes has been modeling for years, and recently started a music career of her own. Meanwhile, Rocco seems to be taking after his film director father, with several acting credits under his belt.

Madonna & Weird Al Yankovic: Everything To Know About Their Wild Relationship