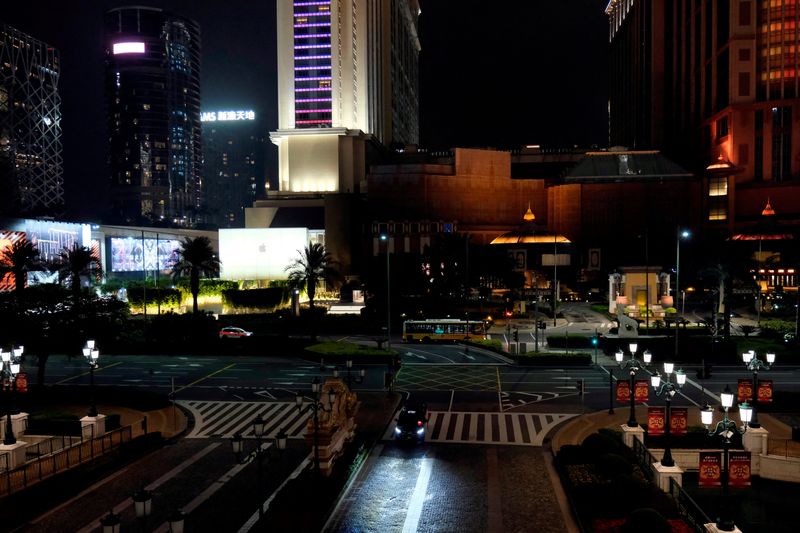 HONG KONG (Reuters) – Macau’s six incumbent casino firms are set to sign new 10-year contracts on Friday to operate in the world’s biggest gambling hub, easing fears of investors and executives after a lengthy bidding process that had threatened to end one company’s run.

The new contracts, which will come into effect on Jan. 1, 2023, will be signed at Macau’s Government House on Friday by CEOs of the casino companies and the territory’s officials.

The operators are expected to focus on non-gaming activities in the new term, particularly as Beijing is keen for Macau to diversify away from gambling and attract foreign tourists. Some analysts expect them to make non-gaming investments of up to $15 billion cumulatively over the next decade.

The stakes could not have been higher for the six companies, who depend on Macau’s gambling industry for their profitability but have been bleeding billions of dollars for most of the past two years due to China’s strict COVID-19 rules.

A broader crackdown by Beijing on capital outflows from the mainland in recent years, including arresting well known gambling executives in the former Portuguese colony, has also decimated the once dominant and lucrative VIP sector.

Genting, with its strong non-gaming track record and mass market appeal, was a credible threat for the Macau operators, many executives and analysts have said.

Previous attempts by Macau to diversify have been unsuccessful, with casino operators shying away from investing in non-gaming due to the high costs, particularly as the gambling industry was far more lucrative. Macau’s gambling industry currently accounts for more than 80% of government revenues.

But Macau’s government laid out conditions in the bidding that it wants the new license holders to prioritise safeguarding local employment, develop the city’s overseas tourism market and boost investment in non-gaming areas, including conferences and Chinese medicine.

While the government’s awarding of licenses to incumbents signals stability and continuity for the tens of thousands of local residents employed by them, the companies will face far greater accountability on non-gaming initiatives than in the last 20 years, executives and analysts said.

Operators are expected to invest a total of 100 billion-120 billion Macau patacas ($12.5 billion-$15 billion) in non-gaming over the next decade, with Sands and Galaxy each committing around 25 billion patacas, and the rest putting up 15 billion patacas, said DS Kim, analyst at J.P. Morgan in Hong Kong.

“These projects will bring new players and tourists into the city, who in turn will spend sizable dollars on gambling,” he said.

Macau is heavily reliant on Chinese visitors. Tourists from greater China, including Hong Kong and Taiwan, account for more than 90% of total visitation.