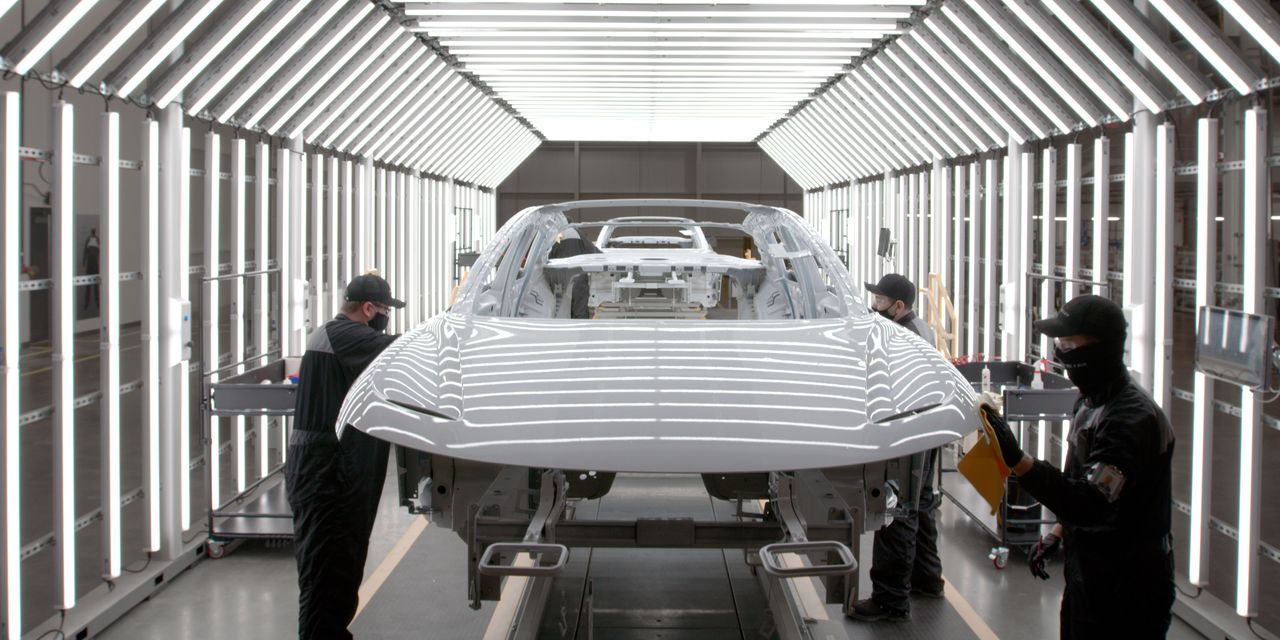 stock gained 14% after the electric-vehicle maker completed its merger with a SPAC the day before. That’s bad news for

The issue for Lucid (ticker: LCID) is not direct competition. Polestar (PSNY) makes the all-electric Polestar 2, a $ 48,000 sedan that competes with

The issue is valuation: Polestar makes Lucid stock look way too expensive. Polestar has about 2.1 billion shares outstanding, giving the company an enterprise value of roughly $ 26 billion. That prices Polestar at 3.9 times projected 2023 sales of $ 6.6 billion.

Lucid, with a value of about $ 29 billion, is priced at more than eight times 2023 sales of $ 3.5 billion. That’s not just expensive relative to Polestar but also to XPeng (XPEV),

(RIVN) —all EV companies with sales, but no free cash flow yet, that trade for around 2.6 times 2023 sales.

Why is Lucid so much more expensive? Saudi ownership is probably the biggest factor. The Saudi Public Investment Fund owns roughly 61% of Lucid stock, and investors might be assuming the deep-pocketed state will fund Lucid in perpetuity. The Saudis do have a history of funding quixotic ventures, like the LIV golf breakaway tour, which has been criticized for bringing “irrational competition” to golf.

Lucid is “the LIV tour for EVs,” says Ross Gerber, CEO of Gerber Kawasaki Wealth & Investment Management. It “can not and will not make money.”

He has a point. The market for ultraexpensive cars, traditional or electric, is small, and that’s the reason companies like Tesla are focused on lower-cost vehicles. Tesla sold about 25,000 of its higher-end Model X and S vehicles in 2021, and 911,208 of its more-affordable Model 3s and Ys. Tesla CEO Elon Musk said the company still made the X and S EVs for “sentimental reasons.”

The fundamental risk for Lucid — which sold roughly 500 cars in the past two quarters and is expected to sell about 13,000 in 2022 — is that volumes will flatten out or decline as the upper end of the EV market gets saturated. That would be very bad news for Lucid’s multiple.

For proof, look no further than NIO. Its stock has fallen 47% over the past 12 months and now trades at about 2.4 times 2023 sales, down from roughly eight times forward sales in early 2021. Some of that is due to problems with China’s economy, but a lot of it is due to the fact that volume growth has stalled out in recent months. “The multiple got crushed as growth slowed dramatically,” says Wedbush analyst Dan Ives. “NIO is a cautionary tale for [the EV] industry. ”

In that case, Lucid would be a cautionary tale of its own.

Write to Al Root at allen.root@dowjones.com