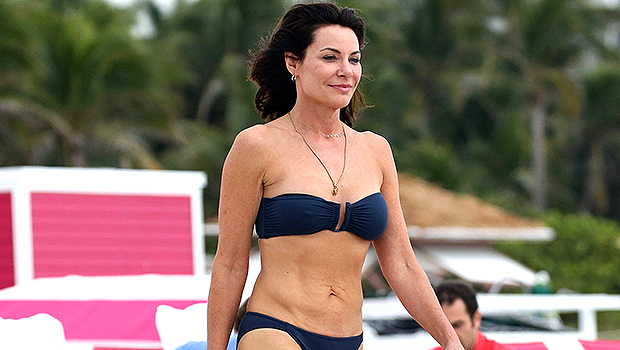 Luann de Lesseps looked like she was living her best life for the last few days of 2022! The former Real Housewives of New York star took to her Instagram on Friday, Dec. 16 to share a sizzling snap of herself in a black bikini while escaping the freezing temperatures of the Big Apple for Los Angeles. “Pre-show pool time,” the 59-year-old cabaret singer captioned the lovely photo.

With the gorgeous backdrop and her svelte physique on full display, Luann certainly caught the attention of her famous friends, as they chimed in on the comment section to compliment the beauty. Jill Zarin wrote, “Show off!!! Lol. Drop dead mama!!!!,” while Tamra Judge added, “Hot stuff!!”

The sassy snap comes after Luann took a swipe at her former RHONY co-star Bethanny Frankel for starting a podcast about the Housewives franchises after Bethanny appeared to shun the series following her exit in 2019.  “I remember at one point, she wouldn’t even say the word ‘Housewives,’” the Class with the Countess: How to Live with Elegance and Flair author said on the Everything Iconic with Danny Pellegrino podcast after Bethenny announced the ReWives rewatch show.

“Well, I think that she’s trying to grab the fame of Housewives to keep her storyline going,” Luann continued. “It sounds like a desperate search for a storyline for herself, and she’s thrown Housewives under the bus a million times.”

Without a loss for words, Luann continued to slam Bethenny’s latest project. “So a disgruntled Housewife doing a Housewives podcast, I don’t think anybody wants to listen to,” Luann said. “That means she’s going to s— on us on her little podcast about the Housewives. It’s pretty sad and pathetic that she has to resort to Housewives because of all of her failed pivots since the Housewives…She’s tried everything other than Housewives and it doesn’t seem to work, and now she’s going back to Housewives.”

Bethenny has yet to publicly respond to Luann’s remarks.


Condo demand up by 33%; Pasig is Top 5 condo-seeker hotspot