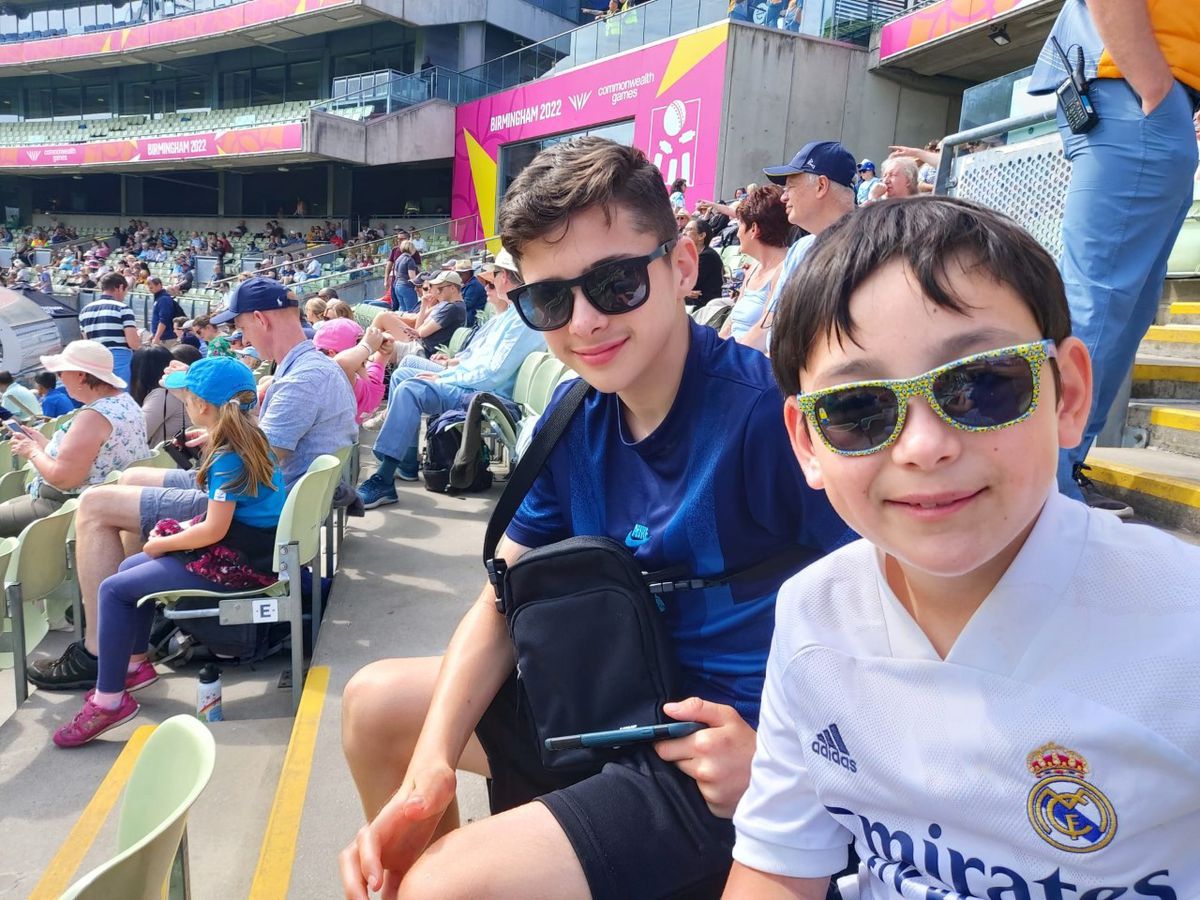 Paying £5 a scoop at the cricket was a little hard to stomach, but Nick Rowe, 45, said it was all part of the Commonwealth Games experience.

Nick and wife Alex, 44, have brought their two boys Jacob, 11, and Daniel, nine, up from London to take in the event.

Staying with family in Wolverhampton, they have so far enjoyed the first cricket 20-20 match at Edgbaston, an early morning session of the hockey and are also looking forward to a session of athletics later this week.

New Zealander Nick has lived in the UK for 15 years so has been cheering on the Kiwis, while the rest of the family are firmly in England’s camp.

They decided to travel up from their home in Hainault in London to see what Birmingham and the West Midlands had to offer. They know all about the impact of a big event, living just a few stops in the Tube from the 2012 Olympic Park in Stratford. That area of ​​east London has been transformed from an area in need of help to a bustling community, complete with a new home for West Ham, the giant Westfield Shopping and the renamed Elizabeth Park.

“It has had a huge impact,” said Nick. “It has brought the area alive and improved the transport system as well. People in the east end of London felt forgotten and neglected and then the Olympics came along. It was transformative.”

The Rowes managed to get to a few events in 2012 and felt the Birmingham Games were an opportunity not to be missed. It was also the chance to give Jacob and Daniel a taste of a global event.

And so far the experience has been positive, with the family enjoying trips to the sport as well as the chance to explore other parts of the region including Shropshire.

“It seemed well organized from the very start,” said Nick. “We watched the opening ceremony on TV and that was really spectacular. We were then up early for the cricket at Edgbaston.

“We were a little concerned how we were going to get there, but the train from Wolverhampton took 30 minutes and at New Street we were met by a crowd of volunteer helpers who couldn’t have been nicer. They pointed us to the free shuttle buses and within 20 minutes we were at the venue.”

After easing through the airport security, the crowd for the opening cricket match between Australia and India was 8,000-strong, guaranteeing a decent atmosphere.

“It was great fun,” said Nick, who was supporting Australia. “We had Aussie fans in front of us and behind us but otherwise it was packed full of people supporting India. It was a little raucous at times and the atmosphere felt special. The Australian fans near us were called during the match by friends back in Sydney who said they had just spotted them in the crowd while watching the game on TV. That was a little surreal to say the least, but reminded us that the match was being watched from across the world.”

Any complaints? “Only the price of the food,” Nick said. “I wasn’t surprised to pay £6.50 for a pint of beer, but I thought £5 for a single scoop of ice cream was ridiculous. We ended up waiting to travel back into Birmingham before grabbing something to eat. The food was just way to expensive, especially if you have a family.”

Jacob managed to wind his dad up by joining the Indian chants and even grabbed a selfie with a couple of the fans.

He said: “I loved the noise of it all. The quality of the cricket was really good, although I was hoping we’d see a few more sixes. The Aussie fans only started making any noise at the end, when they realized they were going to win.”

An early-morning session of the hockey at the University of Birmingham meant an early call the day after, as the Rowe’s witnessed a draw between Pakistan and South Africa followed by a Welsh thrashing of Canada.

A train strike meant taking the car to the Selly Oak campus, but again it was a straight forward exercise, with plenty of on-street parking to be found.

Alex said: “The 9am start did surprise us a little. We had to be up at 6.30 to make sure we were ready to get there for the start, but managed it. We were really pleasantly surprised at how well organized it was, and there were lots of hockey activities for the boys to enjoy. And, like the cricket, we were surprised at the size of the crowd and the atmosphere. Everyone seemed happy to be there and for the Games to be in Birmingham.

“You could sense the feeling of pride both at the venues and within the city. The Commonwealth Games is obviously smaller than the Olympics, but the buzz was similar to how we felt at London 2012. The people of Birmingham couldn’t be friendlier and there were big crowds of fans from around the world who have clearly made the choice to travel here to enjoy a holiday and take in a few sporting events as well.”

Much has been said in the build up to the Games about the benefit to the region’s economy, not just to the West Midlands but to areas close by like Shropshire and Staffordshire. Experts believe it will inject an extra £1 billion, both during the Games and through extra investment in years to come.

The Rowe’s week-long stay in Wolverhampton offers tangible evidence of that benefit. On spare days, they have taken excursions into Shropshire, with a trip to Severn Valley Country Park, the National Trust park at Dudmaston and a trip on the cliff railway before a look around the shops in Bridgnorth.

“I never realized just how beautiful the countryside around Wolverhampton is,” said Alex. “We have enjoyed exploring Shropshire as well as some of the villages in South Staffordshire. And we always enjoy coming to Wolverhampton, which has real character.

“We have been to the West Midlands a number of times because my sister and her family live here, but I have no doubt the Commonwealth Games will have shown many first-time visitors what it has to offer.”