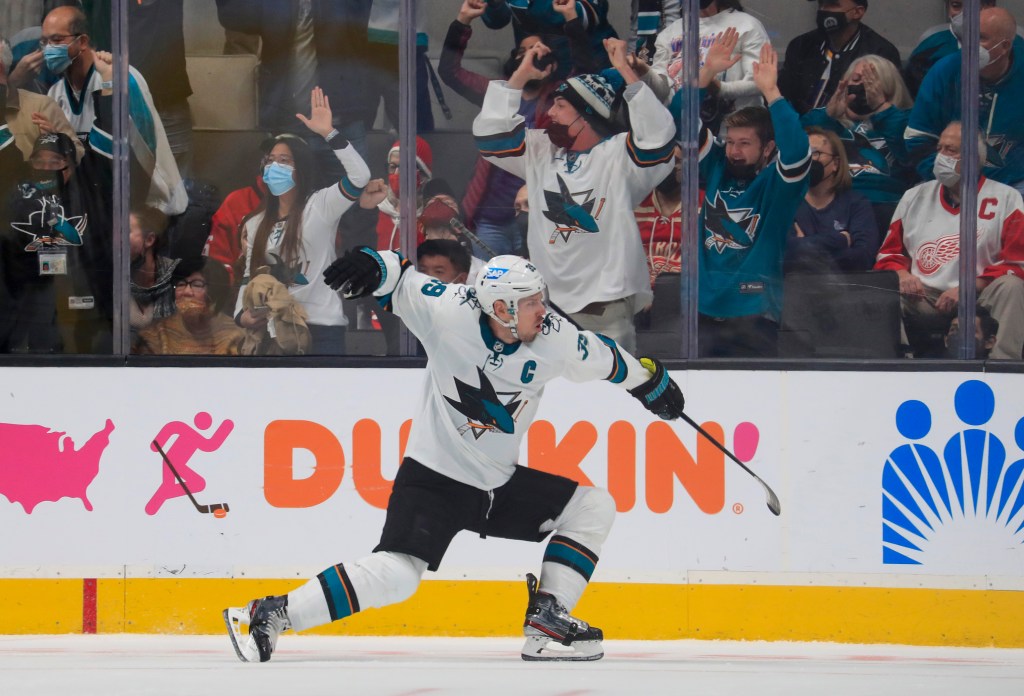 Logan Couture scored 1:00 in overtime as the Sharks won a 3-2 victory over the Detroit Red Wings Tuesday at the SAP Center.

Brent Burns was close to the Red Wings net when he shot the puck at Wings goalkeeper Alex Nedeljkovic. The puck began to slide toward the finish line before Couture battled a check to stick it into the net as the Sharks improved to 6-0 in overtime this season.

The game was reviewed by the NHL for offside, but the goal stood when the Sharks began their four-game home run on a positive note.

Burns also assisted on goals by Timo Meier and Jeff Viel in the first and third periods, respectively, to give him six assists in two games.

Adin Hill closed in on a soft goal at 1:48 in the third period when a seemingly harmless wrist shot from Nick Leddy inside the blue line snuck in under Hill’s glove for a 2-1 Wings lead.

Just 90 seconds later, however, Viel took control of the puck near the blue Wings line that was charged towards the net and put a shot on goal, then slid into Nedeljkovic as the puck crossed the goal line and found its way to the back of the net. .

Meier’s power-play goal came on the 14:24 mark in the first period when he took a clever seam pass from Jonathan Dahlen and knocked it past Alex Nedeljkovic for his 15th of the season. Dahlen’s assist marked his first point since December 9, when he suffered a drought of eight game points to help the Sharks score their second powerplay goal in the last 21 attempts.

Thanks to some great goalkeeping by Nedeljkovic, the score remained 1-0 until late in the second period.

With the Red Wings going 5-on-3 to 1:40 after minor penalties were called on Mario Ferraro and Tomas Hertl at 20-second intervals, Tyler Bertuzzi redirected a pass from Filip Hronek past Hill to equalize the match 1-1.

Nedeljkovic made 25 saves through two periods, and Hill, who was seeking to win his third start in a row, had 11 saves. Hill stopped a total of 66 of 70 shots to help lead the Sharks to wins over the Buffalo Sabers and Philadelphia Flyers late last week.

Couture and defender Erik Karlsson returned to the Sharks’ lineup on Tuesday.

Couture missed the last three Sharks games after he and Lane Pederson entered the NHL’s COVID-19 protocol before the team played the Red Wings at Little Caesars Arena on January 4th. Both Couture and Pederson had to isolate themselves in Detroit for five days after their respective positive tests.

“I got to know my hotel room pretty well,” said Couture, who came in third on the Sharks on Tuesday with 29 points in 32 games. “I did not feel sick at all. I would not have known I had anything, which is a good thing. It is basically the best result is to feel healthy, feel good and ready to go. ”

Karlsson was still unsure after Monday’s training session that he would be able to play against the Red Wings after being injured in the match on January 4. Karlsson injured his upper body that night and missed the Sharks’ games against Buffalo and Philadelphia.

Pederson was a healthy scratch Tuesday when Adam Raska made his NHL debut. Raska started Tuesday’s match in line with Nick Merkley and Viel.