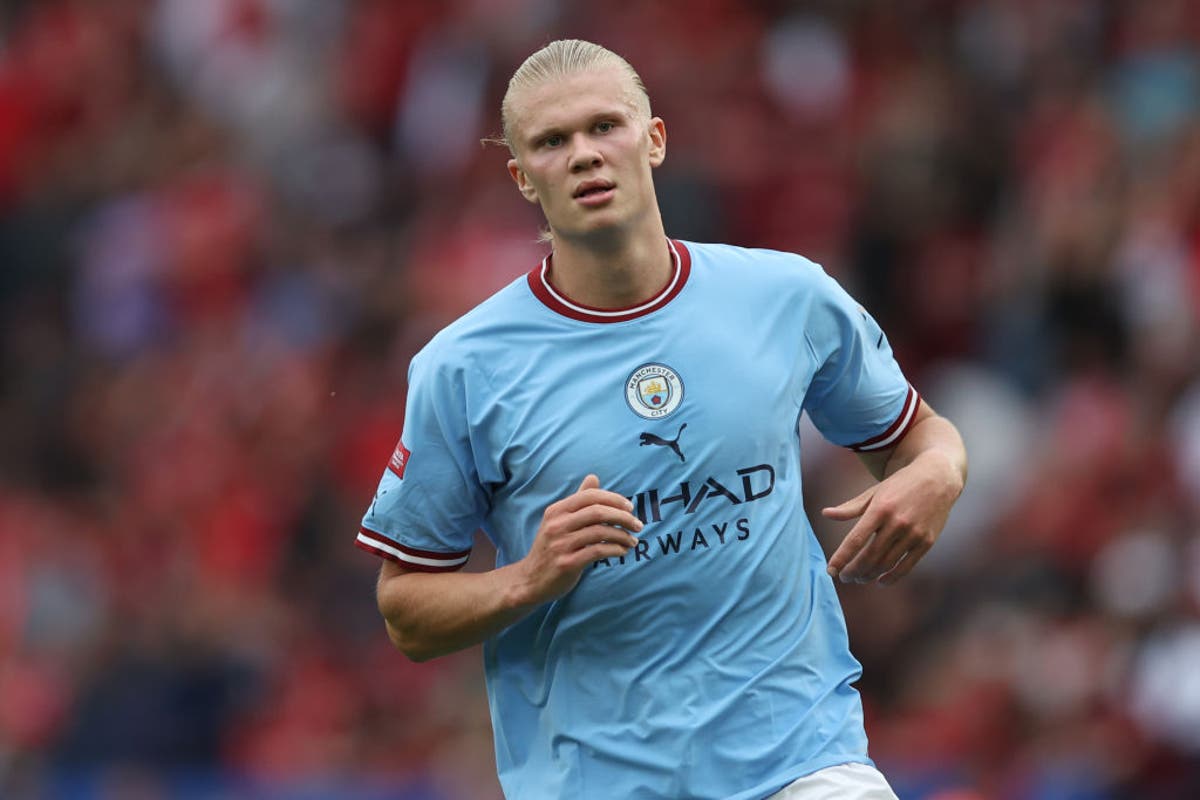 On the Manchester City training ground, many of the players and staff have already noticed something between Erling Haaland and Pep Guardiola that makes them laugh. The manager generally refers to most of the squad by their first names, but that is not the case with the new megastar. Guardiola calls him “Haaland” in almost schoolmasterly style. The tone isn’t totally unlike Sir Alex Ferguson berating Lee Sharpe and Ryan Giggs for having a party and referring to them by their squad numbers. “And you, five.”

Although the interactions have brought smiles from teammates, they reflect a serious point. Guardiola sees himself in an educational role here, more than with many other players. He does not yet see Haaland as the finished article, which is one reason why the Norwegian himself has spoken to the media – in that markedly blunt style – of how he has to improve.

Guardiola currently feels Haaland doesn’t press enough, and wants to work on that with him. He wants to make the 22-year-old more of a blur of energy. That may not be as profound a process as with previous players, though, because this isn’t the usual case of a new signing just fitting into City’s existing attack. Instead, the attack is being reshaped for Haaland, with Julian Alvarez adding further unpredictability. Guardiola has sold Raheem Sterling and Gabriel Jesus, while remaining open to moving on others, in an overhaul he has wanted for at least two years. Given that most team cycles only last three or four seasons before the chemistry starts to go stale, it is a necessity – but also an opening.

The certainties of City’s attack from the last five seasons are gone, replaced by something new.

The twist is that Liverpool have chosen exactly the same moment for a similar move.

If Jurgen Klopp’s changes aren’t as extensive in terms of numbers, they are in terms of feel. That famous front three of Sadio Mane, Roberto Firmino and Mohamed Salah has finally been broken up. The Brazilian had already been in and out of the team, but the actual departure of one of the trio marks a significant psychological change. It’s the end of something, and the beginning of something new.

It also means significant change to the status quo of the last decade, and may well be the season’s decisive factor, after the influence of the winter World Cup.

The question would usually be whether Liverpool can consequently find that edge to bridge that one-point gap to City they have suffered in two of the last four seasons, except these are no longer the same teams. Something deeper has changed.

For the last five seasons, it’s been virtually guaranteed that the two clubs would burst 80 points while scoring buckets of goals. City would carve teams open with cutbacks. Liverpool would blow them over with whirlwind force.

Now, there are already indications that Guardiola wants to play a different way. He wants to use Haaland’s acceleration over long distances to give a more direct dimension to City’s play, while still using the Norwegian’s movement to score the classic Guardiola goals.

That will require some adaptation, as the otherwise meaningless Community Shield reminded. A huge physical presence like Haaland does not just have to get used to a coach as demanding as Guardiola. He has to get used to a more demanding league. This isn’t to doubt that he can do it, of course. Haaland’s talent is abundant. It still needs application.

The high-pressing nature of the Bundesliga meant a lot of high lines, which allowed Haaland so much space to run into. They have accounted for around a quarter of his career goals.

He won’t get that sort of space in England, especially with City, who generally play against amassed low blocks. While it is highly likely that Haaland will score as many of the classic Guardiola cut-backs he has similarly specialized in, he will be working against different systems and in different spaces. It will require some honing.

How West Ham United set up against City’s new attack will be instructive, probably much more so than the Community Shield.

That glorified friendly did make it more necessary that Haaland scores on Sunday, though. This isn’t the 1990s any more, when Dennis Bergkamp saw so much criticism for not scoring after a month. Headlines like ‘Hartlefool’ when the playmaker didn’t score in a League Cup match were bad enough at the time, but expectations are much more extreme now. Given the context of the modern game, forwards at top clubs almost have to adapt immediately.

It is why Nunez’s goal against City was probably important for reasons other than the result. It released him a little, and ensured there isn’t the same pressure.

Nunez’s ability is obvious, too, but so is the capacity for being a flop. The Uruguayan has cost £85m and replaced a club legend after just one truly productive season in Europe with Benfica, and that in a lesser league than Germany.

Again, that isn’t to say he will be a flop. It is that the ingredients are there if anyone wants to go looking for them. The set-up is there, as was seen on social media after a few friends. This is why Klopp has spoken of how the new attack will need to get used to each other, but that isn’t just protection. It’s reality.

The vintage Liverpool front three had a much greater connection than just understanding each other. They were almost playing off instinct.

The introduction of Luis Diaz and use of Mane through the center did admittedly start to change things, but they felt like tweaks rather than a new approach.

The Nunez signing instead alters the whole dynamic. He’s a totally different type of forward to what they have had, something much closer to a traditional number nine.

His mobility shouldn’t be overlooked, of course, but it’s impossible not to be struck by his sheer presence.

That may work in other ways, of course. It may attract some of the attention from Salah, who has found himself being double- and triple-marked in the last few months. The Egyptian could be released.

It may also feed into the biggest factor of all.

No matter how Haaland or Salah – or Diaz – start the season, they will then have five weeks without proper games while most of their peers are going through the intensity of the World Cup. That will allow them to both recharge and really work on their game.

They may be on a completely different level of form once the Premier League returns, at a huge advantage to the rest of the league.

That is for now an unknown, but that’s really the point.

Over the last five seasons, the Premier League’s “normality” has been City and Liverpool pushing the boundaries of points and goals records relentlessly, through highly defined attacking approaches. Opposition sides knew what they would do, but could do little about.

Now, there are finally some uncertainties about them.

They might be better of course, especially given some of the possibilities for Haaland, but they could be worse, or just require adaptation.

Either way, it adds a strange unpredictability to the season, no matter what you call it.