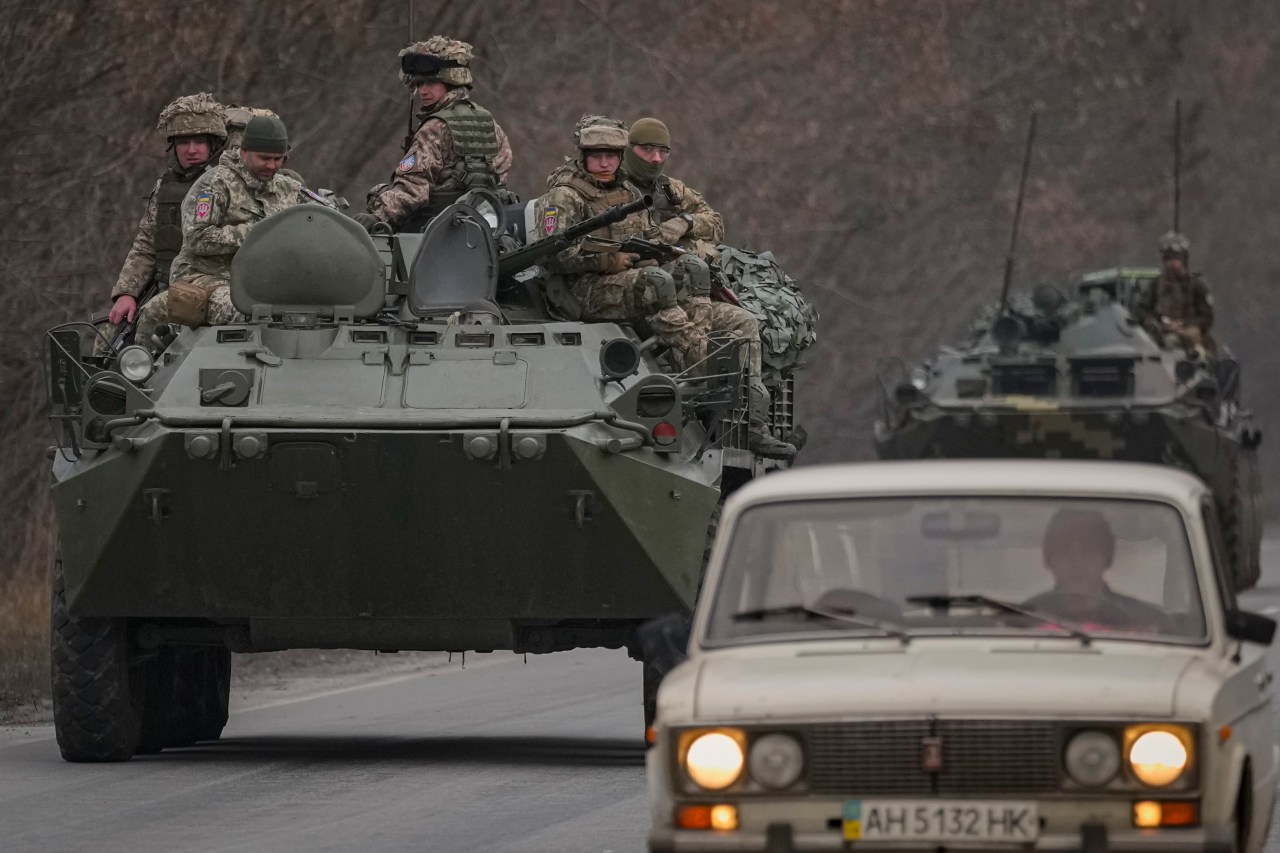 The latest on the Russia-Ukraine crisis:

Russian troops entered the city of Sumy near the border with Russia that sits on a highway leading to Kyiv from the east. The regional governor, Dmytro Zhivitsky, said Ukrainian forces fought Russian troops in the city overnight, but other Russian convoys kept rolling west toward the Ukrainian capital.

“Military vehicles from Sumy are moving toward Kyiv,” Zhivitsky said. “Much equipment has passed through and is heading directly to the west.”

Zhivitsky added that another northeastern city, Konotop, was also sieged. He urged residents of the region to fight the Russian forces.

THE HAGUE, Netherlands – The prosecutor of the International Criminal Court says he is “closely following recent developments in and around Ukraine with increasing concern.”

Karim Khan issued a statement Friday on Twitter while on a visit to Bangladesh, where he is investigating crimes against Myanmar’s Rohingya minority.

Khan said he alerted “all sides conducting hostilities on the territory of Ukraine” that Ukraine has accepted the court’s jurisdiction.

That means “my office may exercise its jurisdiction over and investigate any act of genocide, crime against humanity or war crime committed within the territory of Ukraine since 20 February 2014 onwards,” Khan added.

He said that “any person who commits such crimes, including by ordering, inciting or contributing in another manner to the commission of these crimes may be liable to prosecution before the Court.”

Khan added that because neither Russia nor Ukraine are member states of the court, his office does not have jurisdiction over the crime of aggression in the conflict.

The International Criminal Court is the world’s permanent war crimes court. It was set up in 2002 to prosecute atrocities in countries where local authorities are unable or unwilling to conduct trials.

KYIV, Ukraine – The Ukrainian military is reporting significant fighting northwest of the nation’s capital as Russian forces apparently try to advance on Kyiv from the north.

The military said Friday morning a bridge across a river had been destroyed in the area of ​​Ivankiv, about 60 kilometers (40 miles) northwest of Kyiv.

“The hardest day will be today. The enemy’s plan is to break through with tank columns from the side of Ivankiv and Chernihiv to Kyiv. Russian tanks burn perfectly when hit by our ATGMs (anti-tank guided missiles), ”Interior Ministry adviser Anton Gerashchenko said on Telegram.

Russia’s invasion of Ukraine began early Thursday with a series of missile strikes, many on key government and military installations, quickly followed by a three-pronged ground assault. Ukrainian and US officials said Russian forces were attacking from the east toward Kharkiv, Ukraine’s second-largest city; from the southern region of Crimea, which Russia annexed in 2014; and from Belarus to the north.

TOKYO – The Ukrainian ambassador to Japan is urging China to join international efforts to stop the Russian “massacre” in his country amid Beijing’s lack of criticism of Moscow’s actions.

“We would very much welcome that China exercises its connection with Russia and talks to Putin and explains to him that it is inappropriate in the 21st century to do this massacre in Europe,” Ukrainian diplomat Sergiy Korsunsky told a news conference in Tokyo.

China has not criticized Russia over its actions against Ukraine, and has joined in verbal attacks on Washington and its allies.

“I do believe China can play a much more active role to work with Putin in a manner we expect for civilized countries to do,” he said.

Korsunsky also asked for support from the United States and its allies to provide anti-missile defense equipment to fight Russian cruise missile attacks. He said Ukraine wants to join NATO and called for its support in resolving the conflict.

KYIV, Ukraine – Explosions are being heard before dawn in Kyiv as Western leaders scheduled an emergency meeting and Ukraine’s president pleads for international help.

The nature of the explosions was not immediately clear, but the blasts came amid signs that the capital and largest Ukrainian city was increasingly threatened following a day of fighting that left more than 100 Ukrainians dead.

Ukraine President Volodymyr Zelenskyy said the government had information that “subversive groups” were encroaching on the city, and US Secretary of State Antony Blinken said Kyiv “could well be under siege” in what US officials believe is a brazen attempt by Russian President Vladimir Putin to dismantle the government and replace it with his own regime.

US Defense Secretary Lloyd Austin told lawmakers on a phone call that Russian mechanized forces that entered from Belarus were about 20 miles from Kyiv, according to a person familiar with the call

BEIJING – China’s Embassy in Ukraine says it is arranging evacuation flights for Chinese citizens. An embassy statement Friday says conditions in Ukraine have “deteriorated sharply” but makes no mention of the Russian invasion.

The embassy gave no details on where the evacuation flights would be leaving from. Nor did it say when the charter flights might happen, saying that scheduling will depend on the “flight safety situation.”

It says travelers should be packed and ready to react quickly once flight schedules are announced. Passengers must have a passport from China, Hong Kong or Macau or a “Taiwan compatriot card.”

The embassy earlier advised Chinese in Ukraine to stay home and to put a Chinese flag on their vehicles if they planned to travel long distances.

MANILA, Philippines – The Philippines top diplomat says he will travel to Ukraine’s border with Poland to ensure the safety of Filipinos fleeing from the eastern European country now under attack by Russian forces.

Foreign Secretary Teodoro Locsin Jr. did not specify in his tweet Friday where he is going. Nor did he say how many of the approximately 380 Filipinos in Ukraine are trying to flee amid the Russian invasion.

The Philippines has not condemned Russia’s assault on Ukraine but has called for a peaceful resolution of the conflict. Its outgoing president, Rodrigo Duterte, has been a vocal Asian critic of US security policies and has nurtured close ties with Russian President Vladimir Putin and Chinese leader Xi Jingping.

BRUSSELS – European Union leaders are putting on a united front after a six-hour meeting during which they agreed on a second package of economic and financial sanctions on Russia.

The EU Council president accuses Russia of using “fake pretexts and bad excuses” for justifying its invasion of Ukraine and says sanctions will hurt the government,

The legal texts for the sanctions agreed on are expected to be finalized overnight and be submitted for approval to EU foreign affairs ministers Friday.

She says Russia’s energy sector will also be targeted “by making it impossible for Russia to upgrade its refineries.” And there will be a ban on sales of software, semiconductors and airliners to Russia.

UNITED NATIONS – The UN Security Council will vote Friday on a resolution that would condemn Russia’s military aggression against Ukraine “in the strongest terms.” It also would demand an immediate halt to Russia’s invasion and the withdrawal of all Russian troops.

A senior US official says the Biden administration knows the measure will be vetoed by Russia, but believes it is very important to put the resolution to a vote to underscore Russia’s international isolation.

The official says the council vote will be followed by a resolution voted on quickly in the 193-member UN General Assembly where there are no vetoes.

The final draft resolution, obtained Thursday by The Associated Press, would reaffirm the council’s commitment “to the sovereignty, independence, unity, and territorial integrity of Ukraine within its internationally recognized borders.”

The council is scheduled to vote at 3 pm EST Friday.

KYIV, Ukraine – Ukrainian President Volodymyr Zelenskyy says 137 civilians and military personnel have been killed so far in the Russian invasion of his country.

He calls them “heroes” in a video address released early Friday in which he also says hundreds more have been wounded.

Zelenskyy says that despite Russia’s claim it is attacking only military targets, civilian sites also have been struck. In his words: “They’re killing people and turning peaceful cities into military targets. It’s foul and will never be forgiven. ”

The president says all border guards on Zmiinyi island in the Odesa region were killed Thursday. Ukraine’s border guard service earlier in the day reported that the island was taken by the Russians.