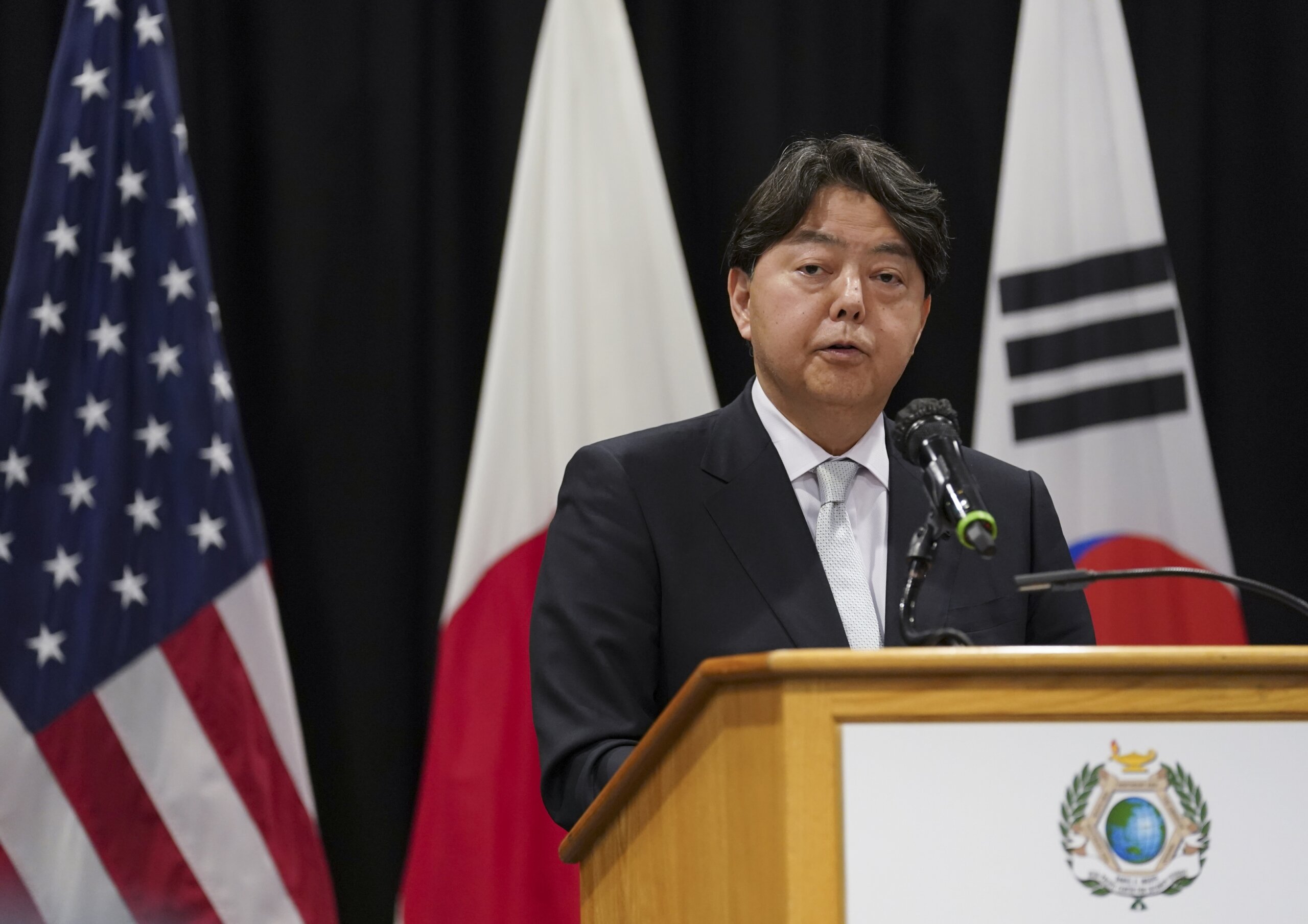 Key developments in the Russia-Ukraine war.

LVIV, Ukraine — Talks between Russia and Ukraine have resumed via video link.

Russian delegation head Vladimir Medinsky published a picture of the talks under way Friday. Ukrainian President Volodymyr Zelenskyy’s office confirmed to The Associated Press that the negotiations had resumed.

Friday’s talks came three days after the last meeting, in Turkey, between Russian and Ukrainian delegations.

Medinsky, the Russian lead negotiator, said “our positions on Crimea and the Donbas are unchanged.”

Russia annexed the Crimean Peninsula in southern Ukraine in 2014. The Donbas is the predominantly Russian-speaking industrial region where Moscow-backed separatists have been battling Ukrainian forces since 2014.

KEY DEVELOPMENTS IN THE RUSSIA-UKRAINE WAR:

— Ukraine top of agenda as China, EU prepare to meet at summit

— Go to https://apnews.com/hub/russia-ukraine for more coverage

BRUSSELS — The European Union’s executive arm is proposing that the 27-nation bloc’s countries allow the millions of refugees fleeing the war in Ukraine to exchange their hryvnia banknotes into the currencies of host member nations.

The European Commission said Friday its proposal aims at promoting a coordinated approach within the region.

“This approach was necessary in light of the fact that the National Bank of Ukraine had to suspend the exchange of hryvnia banknotes into foreign cash in order to protect Ukraine’s limited foreign exchange reserves,” the commission said.

“As a consequence, credit institutions in EU Member States have been unwilling to carry out the exchanges due to the limited convertibility of hryvnia banknotes and exposure to exchange rate risk.”

According to EU figures, more than 3.8 million of people fleeing the war have arrived in the European Union. More than 4 million have fled Ukraine.

The Commission proposed a maximum limit of 10,000 hryvnias (306 euros) per person, without charges, at the official exchange rate as published by the National Bank of Ukraine.

BERLIN — The head of the U.N. nuclear watchdog says he will head a team to the decommissioned Chernobyl power plant in Ukraine “as soon as possible.”

Rafael Mariano Grossi wrote on Twitter that the International Atomic Energy Agency “assistance and support” mission to Chernobyl “will be the first in a series of such nuclear safety and security missions to Ukraine.”

Grossi’s comments followed his visits to Ukraine and then to Russia this week. He didn’t elaborate on his plans or give a more precise timeframe. He was due to hold a news conference in Vienna later Friday.

Russian forces took control of Chernobyl, the site of a 1986 nuclear disaster, at the beginning of the war. But authorities say the troops have now left after returning control to the Ukrainians.

COPENHAGEN, Denmark — The Norwegian government is proposing a national 14.4 billion kroner ($1.7 billion) crisis package for the war in Ukraine, including spending on refugees and national defense.

Norwegian Prime Minister Jonas Gahr Støre told a press conference Friday, “We should take good care” of the Ukrainian refugees while they are in Norway. “This will demand the best of us,” he said.

If the proposal is passed by parliament, as expected, some 7.1 billion kroner ($815 million) will be spent on the refugees, police and the Norwegian immigration agency. Norway expects to receive 35,000 refugees this year.

Money is also going to strengthening the country’s military and civilian defense. Earlier the government has said it wants an extra allocation of 3.5 billion kroner ($402 million) for 2022 to strengthen NATO member Norway’s Armed Forces and civilian preparedness.

MOSCOW — The Kremlin says reports that Ukrainian helicopter gunships attacked a fuel depot inside Russia, setting it ablaze, are not conducive to talks between the two sides in the war.

Asked if the reported incident could be viewed as an escalation of the conflict, Kremlin spokesman Dmitry Peskov said, “Certainly, this is not something that can be perceived as creating comfortable conditions for the continuation of the talks.”

Russia-Ukraine talks were expected to continue Friday via video link.

The governor of the Russian border region of Belgorod accused Ukraine of flying helicopter gunships into Russian territory early Friday morning and targeting the oil depot, in what if confirmed would be the first attack of its kind.

It was not immediately possible to verify the report.

Peskov said President Vladimir Putin had been informed about the reported fire. He told a daily conference call with reporters that Russian authorities were taking measures to ensure fuel supplies in the region were not disrupted.

BEIJING — China is accusing the United States of instigating the war in Ukraine and says NATO should have been disbanded following the break-up of the Soviet Union.

“As the culprit and leading instigator of the Ukraine crisis, the U.S. has led NATO to engage in five rounds of eastward expansion in the last two decades after 1999,” Foreign Ministry spokesperson Zhao Lijian told reporters at a daily briefing Friday.

“The number of NATO members increased from 16 to 30, and they have moved eastward more than 1,000 kilometers (600 miles) to somewhere near the Russian border, pushing Russia to the wall step by step,” Zhao said.

While China says it is not taking sides in the conflict, it has declared a “no limits” partnership with Moscow, has refused to condemn the invasion, opposes sanctions on Russia and routinely amplifies Russian disinformation about the conflict, including not referring to it as an invasion or a war in keeping with Russian practice.

Zhao’s comments came as Chinese and European Union leaders were meeting virtually for a summit at which Ukraine was expected to dominate discussions. EU officials say they are looking for a commitment from China not to undermine sanctions and assist in efforts to halt the fighting.

GENEVA — The International Committee of the Red Cross says it’s not sure that a planned delivery of aid into Mariupol and an evacuation of civilians out of the besieged Ukrainian city will happen Friday.

Spokesman Ewan Watson told a U.N. briefing in Geneva that the humanitarian group has sent three vehicles toward Mariupol and a frontline between Ukrainian and Russian forces, but two trucks carrying supplies for the city were not accompanying them.

Dozens of busses that have been put together by Ukrainian authorities to take people out also have not started approaching the dividing line, he said Friday.

Watson called it an “extremely complex” operation, adding that “not all details are in place to ensure that this happens today.”

He said the hope was that “thousands” of people could be ferried out, and their destination would be into parts of Ukraine less affected by the fighting that has been ongoing since Russia’s invasion on Feb. 24.

THE HAGUE, Netherlands — Europol, the European Union police agency, has sent teams to countries bordering Ukraine in an effort to protect refugees from criminals.

The Hague-based agency said Friday its teams are supporting local authorities by running secondary security checks and seeking to “identify criminals and terrorists trying to enter the EU in the refugee flow and exploit the situation.”

The Europol teams are operating in Lithuania, Poland, Romania, Slovakia and Moldova and are planning to deploy to Romania, too.

The agency says they also are gathering intelligence to feed into criminal threat assessments across Europe.

The United Nations says that more than 4 million people have fled Ukraine since Russia invaded on Feb. 24.

COPENHAGEN, Denmark — Police in Norway say they have intensified information and intelligence gathering as a result of the security situation in Europe.

The move is to help “prevent and detect crime as a result of the migration flow and the tense security policy situation,” National Police Commissioner Benedicte Bjørnland said in a statement Friday.

She added that “we are particularly aware of the crime challenges that may arise as a result of the migration flow.” She did not elaborate.

More than 7,800 Ukrainians have sought asylum in Norway.

TOKYO — Japanese Foreign Minister Yoshimasa Hayashi says he is heading to Poland later Friday to assess the need for the war-displaced Ukrainians in that country and assist those who seek refuge in Japan.

Hayashi, during his five-day trip through Tuesday, is set to meet with Polish Prime Minister Mateusz Morawiecki and other top officials, as well as international organizations. Officials are still making arrangements for a possibility of his government plane bringing some Ukrainians on his way back, Hayashi said.

“In order to support the Ukrainian people facing the difficulty and to show our solidarity with Ukraine, Japan is pursuing our effort to accept those who fled to a third country,” Hayashi said.

Japan’s government last month launched a taskforce to prepare accepting Ukrainian war-displaced as part of humanitarian support — a rare move for a country known for its strict and reluctant refugee policy. Several municipalities, including Tokyo, Kanagawa, Ibaraki and Osaka, have offered to be their host towns and provide support for medical needs, education, jobs and housing.

Ukrainian Ambassador to Japan Sergiy Korsunsky told reporters Friday that some 300 relatives of Ukrainian residents in Japan have been granted entry, and more arrivals are expected from next week.

BRUSSELS — The president of the European Parliament says she is traveling to Kyiv.

Roberta Metsola announced the trip to the Ukrainian capital city on her Twitter account late Thursday, posting a picture of her standing in front of a railcar.

Metsola is the first president of an EU institution to travel to the Ukrainian capital since the war began on Feb. 24. Details about her travel plans and who she will meet have not been announced.

SYDNEY — Australian Prime Minister Scott Morrison said Friday that his country will be sending armored Bushmaster vehicles to Ukraine to help in its war against Russia.

Ukrainian President Volodymyr Zelenskyy addressed the Australian Parliament on Thursday and asked for the Australian-manufactured four-wheel-drive vehicles and other aid.

Morrison told reporters the vehicles will be flown over on Boeing C-17 Globemaster transport planes, but he didn’t specify how many Bushmaster vehicles would be sent or when.

Zelenskyy said “something prevented them from determining where their homeland was” and they “violated their military oath of allegiance to the Ukrainian people.”

According to Zelenskyy, one of the generals had headed internal security at the SBU, the main intelligence agency.

He said the other general had been the SBU head in the Kherson region, the first major city to fall to the Russians.

Zelenskyy didn’t say anything about the fates of the two generals other than them being stripped of their rank.

LVIV, Ukraine — The Ukrainian government said Russian forces blocked 45 buses that had been sent to evacuate civilians from the besieged port city of Mariupol, and only 631 people were able to get out of the city in private cars.

Deputy Prime Minister Iryna Vereshchuk said late Thursday that 12 Ukrainian buses with humanitarian aid left Melitopol for Mariupol, but the Russian forces stopped the buses and seized the 14 tons of food and medicines.

According to Ukrainian officials, tens of thousands of people have made it out of Mariupol in recent weeks along humanitarian corridors, reducing the prewar population of 430,000 to about 100,000 by last week.

Vereshchuk said about 45,000 Mariupol residents have been forcefully deported to Russia and areas of eastern Ukraine controlled by Russian-backed separatists.

LVIV, Ukraine — The last Russian troops left the Chernobyl nuclear plant early Friday, according to the Ukrainian government agency responsible for the exclusion zone around the plant.

Deputy Prime Minister Iryna Vereshchuk said Russian troops who dug trenches in the forest were exposed to radiation, but that could not be confirmed.

Energoatom said that the Russian military was also preparing to leave Slavutych, a nearby city where power plant workers live.

Copyright
© 2022 The Associated Press. All rights reserved. This material may not be published, broadcast, written or redistributed.