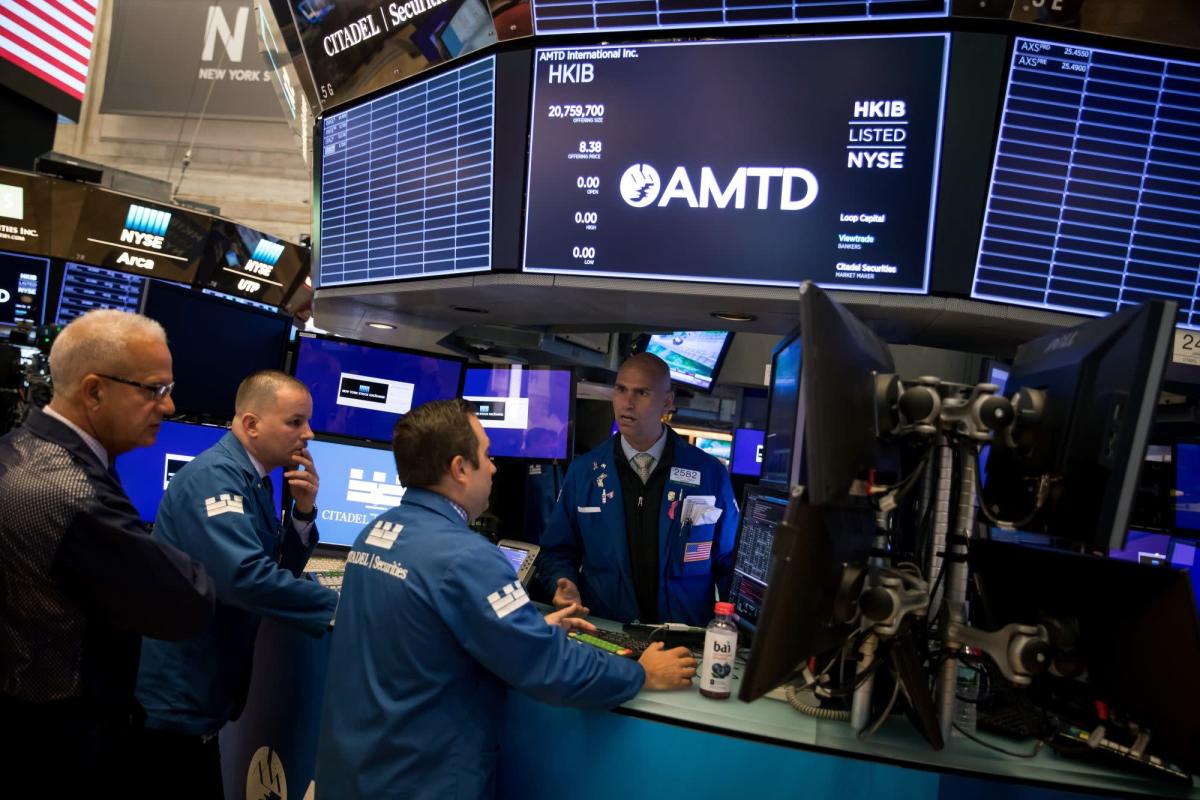 (Bloomberg) — Even after a retail frenzy that saw GameStop Corp. become the hottest stock in the world and a dog-themed joke cryptocurrency gain trillions in value, the whirlwind trading in an obscure Hong Kong financial business stands out as spectacular.

The rapid rise of AMTD Digital Inc. — a barely profitable financial services firm — is a tale that, while reminiscent of last year’s meme-stock frenzy, is even more mysterious. In a move that has puzzled the financial community, the company’s shares skyrocketed in less than three weeks from their $7.80 initial public offering price to an intraday high of $2,555, an eye-popping jump of more than 32,000%.

Perhaps even more perplexing, unlike other publicly traded financial juggernauts that report hundreds of billions of dollars in revenue each year, AMTD’s IPO prospectus lists total sales of just $25 million for the year ended April 2021. Still, that didn’t stop the company’s market value from ballooning to $310 billion at Tuesday’s close, making it larger than industry stalwarts like Goldman Sachs Group Inc. and Bank of America Corp.

“I’m not entirely sure what the business model there is, but that hasn’t mattered to the Reddit crowd who are dipping in like piranhas,” said Max Gokhman, chief investment officer at money manager AlphaTrAI Inc.

Much like the retail-induced mania of early 2021, which catapulted stocks like GameStop and AMC Entertainment Holdings Inc. to baffling heights before they plunged just as quickly, AMTD’s run as a financial giant seems likely to be short-lived. Since hitting a record on Tuesday, ATMD Digital has fallen by 57%, erasing about $175 billion in market value along the way. That’s more than the entire current market capitalization of companies including Morgan Stanley, Intel Corp., and Goldman Sachs.

Still, it’s hard to pin the stock’s wild moves entirely on the retail crowd. While AMTD Digital appeared high on Fidelity’s list of most actively traded stocks multiple times during the week, it lacks a few key characteristics.

For starters, AMTD Digital doesn’t yet have any options available to be traded. Frenzied buying of call options was a hallmark of the GameStop and AMC stock surges. Trading volumes, meanwhile, have also been extremely low for a majority of the past week’s moves. Despite seeing swings of at least 40% in either direction on all but one day this week, the stock has yet to crack 500,000 shares traded on a single day. On Friday, just over 50,000 shares changed hands, its sixth straight session of declining volume.

As for the retail traders themselves, even a cursory search of the top posts on Reddit’s WallStreetBets forum shows a flood of denials of any involvement.

AMTD Digital’s frenetic moves also led to extreme volatility in the shares of one of its parent companies, AMTD Idea Group. That firm, which is part of the larger AMTD Group umbrella, owns roughly 88.7% of AMTD Digital’s outstanding shares. It too saw a wave of buying this week, soaring as much as 520% ​​on Tuesday alone.

On Friday, AMTD Digital announced that the underwriters of its mid-July IPO had decided to exercise their full greenshoe option. That means they’ll be able to purchase an additional 2.4 million American depositary shares at their listing price of $7.80 each, roughly 99% below where they closed on Friday.

AMTD Global Markets Ltd. was the lead underwriter on AMTD Digital’s IPO, responsible for nearly 90% of the shares, meaning it could potentially profit off its involvement.

That’s all shone a spotlight on Calvin Choi, AMTD Group’s chairman, chief executive officer and major shareholder, who’s currently facing an industry ban in Hong Kong for failing to disclose conflicts of interest when he worked at UBS Group AG.

As shocking as the post-IPO surge for AMTD Digital has been, it is far from alone in such moves. On Friday, another Hong Kong-based financial firm Magic Empire Global Ltd. made its US trading debut only to see its shares halted for volatility multiple times as it surged as much as 5.799%.

Other Hong Kong and Chinese stocks have seen similarly outsized gains after debuting in the US in recent weeks. At least five other companies, including Austin Technology Group Co., Golden Sun Education Group Ltd. and Intelligent Living Application Group Inc. have posted intraday gains of 395% or more on their first day of trading.

Michael Burry, the investor who famously predicted the housing crash in 2008, tweeted a screenshot of Magic Empire’s stock chart Friday and said, “Gamblers gamble more the more they lose.”

(Updates with additional context on AMTD, prices throughout)