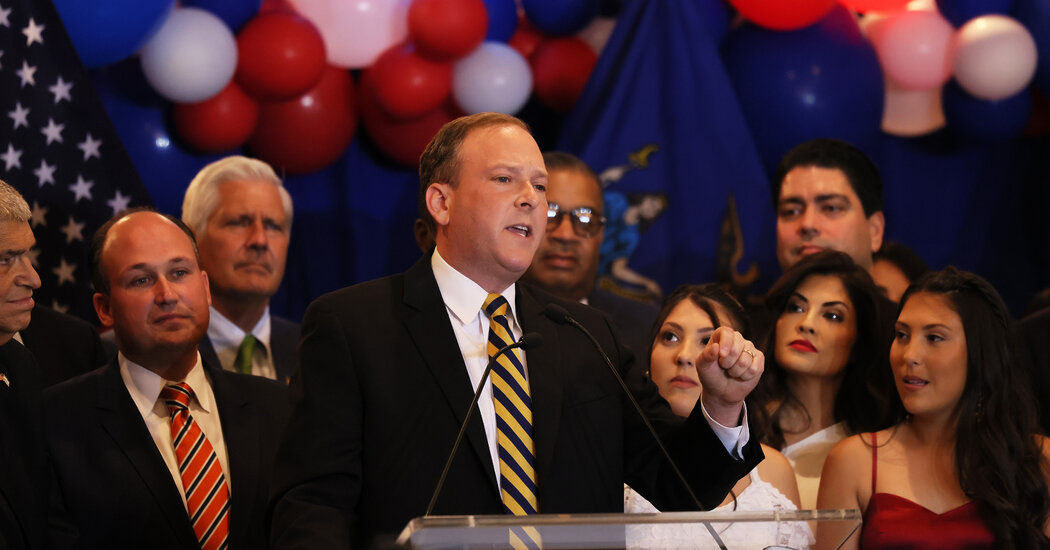 Representative Lee Zeldin, the Republican candidate for governor of New York, was attacked on Thursday at a campaign event outside Rochester by a man with a pointed weapon who dragged him to the ground before being subdued by several other men, according to officials and videos of the attack. Mr. Zeldin was not injured, a campaign representative said.

The video show Mr. Zeldin, standing on the bed of a truck, addressing supporters gathered outside a VFW hall in Fairport, NY, when a man approaches him slowly from the right, grabs him by the arm and brandishes a weapon. Mr. Zeldin responds by grabbing the man’s wrist and is then joined by several men in containing the attacker.

Mr. Zeldin said in a statement issued after the attack that he, his running mate, Alison Esposito, and members of his campaign staff were safe.

“Someone tried to stab me onstage during this evening’s rally, but fortunately, I was able to grab his wrist and stop him for a few moments until others tackled him,” he said, putting the attack in the context of his tough-on- crime campaign message. “I’m as resolute as ever to do my part to make New York safe again.”

Mr. Zeldin said the man had been taken into custody, but local law enforcement agencies did not immediately respond to requests for comment. Information about the man’s identity and potential motivation was not immediately forthcoming Thursday night.

The incident comes at a time when actual and threatened political violence — including threats directed at members of Congress — are on the rise across the United States.

The event in Monroe County was the first stop on a planned weekend “Unite to Fire Hochul” bus tour across upstate New York to informally kick off Mr. Zeldin’s general election campaign.

He has made crime a centerpiece of his campaign for governor, using apocalyptic terms to paint a dark picture of the state of public safety and to appeal to New Yorkers’ sense of unease. He has specifically pinned blame on rising crime on Democrats and Ms. Hochul, calling on them to reinstate most cash bail and ratchet up policing.

Just hours before the attempted attack, Mr. Zeldin’s campaign had released its first digital advertisement of the general election, a lengthy spot attacking Ms. Hochul for refusing to fire Alvin L. Bragg, the Manhattan district attorney, after Mr. Bragg initially filed second-degree murder charges against a bodega clerk who fatally stabbed an attacker. Mr. Bragg dropped the charge on Tuesday, but he and his policies have been a frequent punching bag for the political right.

In his blunt speech just before the attack, Mr. Zeldin had been discussing how rising crime and New York’s high cost of living were driving residents out of the state to places like Florida and Texas. “This is our last stand for New York,” he said, referring to his campaign to oust Democrats from Albany, according to video of the speech.

Mr. Zeldin faces an uphill battle as he tries to become the first Republican to win statewide in New York in two decades. Registered Democrats outnumber Republicans more than two to one in New York, and Ms. Hochul enters the race with a huge financial advantage. She hopes both factors will be a bulwark against favorable political conditions for Republicans nationwide.