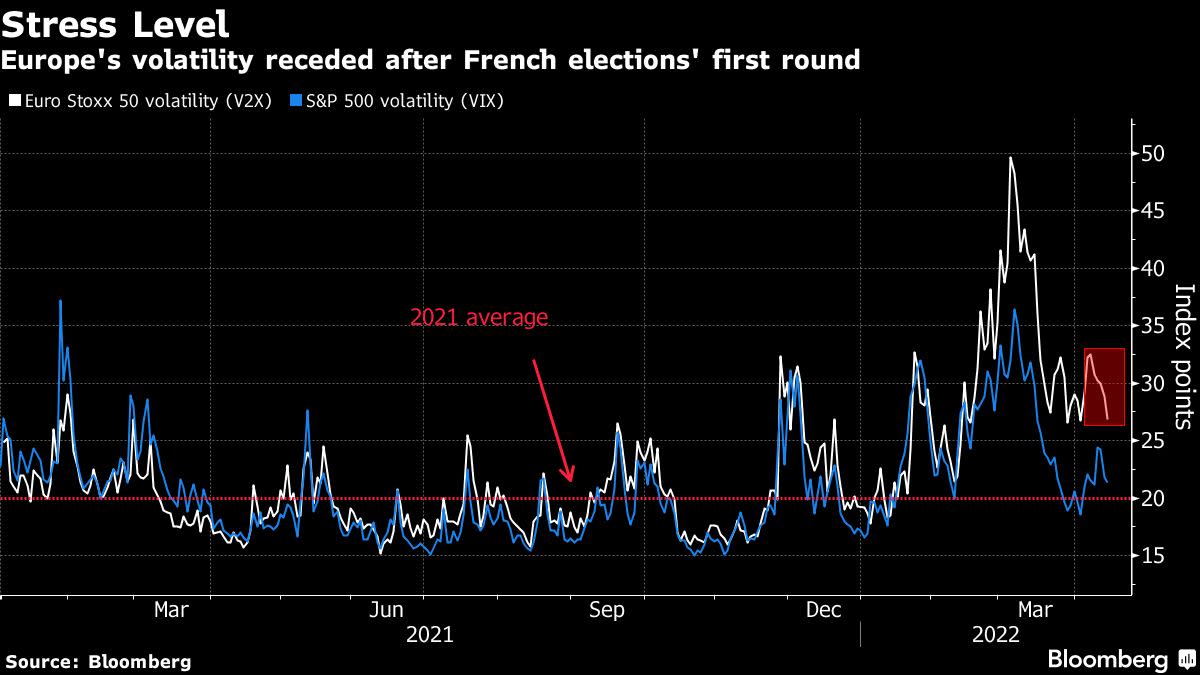 (Bloomberg) – All the polls show French President Emmanuel Macron is likely to win a second term Sunday. But from Citigroup Inc. to asset manager Amundi SA, the warnings are piling up that markets are underestimating the risk of a surprise.

If nationalist Marine Le Pen upsets the incumbent, European stocks are likely to slump Monday, while French bonds would underperform German securities and the euro could even trade at parity with the dollar in coming months, according to investors and strategists. The full consequences would not be visible until after legislative elections in June, they said, when it would be clear whether she has a majority to back her proposals to review free trade agreements and re-establish border controls.

Macron leads Le Pen by 55.7% to 44.3% heading into the sole debate Wednesday night, a polling average shows. But memories are raw from 2016, when investors were blindsided by the strength of populist sentiment in the UK’s vote to leave the European Union and the US election of Donald Trump.

“It would be an awful day for markets,” said Eric Hassid, a trader at Aurel BGC in Paris. “I still think Macron will win, but the opinion polls that come after the presidential debate will be crucial. It would not be the first time there’s a surprise. We had the same with Brexit. “

Banks and fund managers are recommending a variety of strategies to hedge against a possible Le Pen win. Citigroup, which puts Macron’s chance of winning at 65%, recommended Tuesday that investors sell eight-year French government bonds while buying the equivalent Austrian security. Amundi is “cautious” on European equities and the euro, favoring shares of high-quality US companies and inexpensive stocks instead, the firm said last week.

READ: Trader’s Guide to the Euro Before French Presidential Elections

A Le Pen victory arguably would be an even bigger shock to investors, since the polls show a larger lead for Macron than they did for the UK’s remain vote in 2016. And French pollsters have a good track record, with surveys ahead of the 2017 election and in this year’s first round of balloting very much in line with the outcomes.

There would be “a Black Monday” in the stock market if Le Pen wins, with the Stoxx 600 probably down 6% and France’s CAC 40 Index sinking more than that, said Ludovic Labal, manager of the Strategic Europe Quality Fund at Eric Sturdza Investments .

In a note Wednesday, Barclays Plc strategists led by Emmanuel Cau wrote they expect at least a 5% drop in equity markets in the event of a Le Pen victory but see no reason to panic right now. Oddo BHF strategist Sylvain Goyon put the probability of a Le Pen win at no greater than what it was five years ago, but such an event would be particularly unfavorable to financial stocks, while the euro would likely move below parity against the dollar.

On the credit side, Barclays strategists warned that corporate bond investors should not get too blasé about the possibility of Le Pen becoming the next president, saying that risks are skewed to the downside.

“It would only take one poll indicating a tighter race to trigger an underperformance of French credits,” the Barclays analysts wrote. “Given the lack of any risk premium in these credits, we remain wary.”

Although Le Pen no longer advocates an exit from the European Union, she’s called for a referendum on revising the constitution to make French law superior to EU rules. She also wants to restore permanent border controls in the Schengen zone, which would contradict law in the bloc, and would seek to reduce financial contributions to the EU.

Those measures would reverse Macron’s push for greater European integration, thus weighing on bonds from weaker EU countries such as Italy, according to Citigroup. The outcome also would undermine other pro-EU leaders such as Italy’s Mario Draghi, said Frederik Ducrozet, a strategist at Pictet Wealth Management.

“It would be a huge shock psychologically for people in my generation and older,” said Ducrozet, 41, who voted in 2002 when Jacques Chirac trounced Le Pen’s father in the second round. Macron is probably the most pro-European and the most experienced leader in Europe – so what would it mean for Draghi? What would it mean for the rest of Europe? ”

A win for Le Pen could see the spread between Italian and German 10-year bond yields widen to close to 250 basis points, he said, from 164 basis points at Tuesday’s close. Longer term there is also a “lot of complacency” about the level at which the European Central Bank would step in to calm markets, Ducrozet added.

For now, though, as Macron’s lead in the polls has grown, the spread between the yields on 10-year French government bonds and equivalent German securities has narrowed to 47 basis points from 55 basis points before the first round April 10. Vincent Juvyns, global market strategist at JPMorgan Asset Management, said that difference could rise to more than 80 basis points in the event of a Le Pen win.

Viraj Patel, a macro strategist at Vanda Research, recommends buying credit-default swaps on Italian government bonds as a hedge against the risk of more fragmented euro area post-election. He also sees a potential Le Pen victory as sparking a “full capitulation” of those betting on a stronger euro.

“A Le Pen victory would give us the conviction we need to be calling for euro-dollar parity, but that may be more of a three- to six-month type of evolution rather than happening knee-jerk on the day,” he said .

Given that Le Pen would need to win a parliamentary majority in June to fully implement her policies, currency traders should be able to focus on other drivers for the euro such as monetary policy tightening, said Lee Hardman, a foreign-exchange analyst for MUFG Bank .

“The market could potentially overreact initially to the surprise win for Le Pen but actually the reality may not be as bad as initially feared,” he said, adding that the euro could weaken by 3% to 5% on the initial victory. “It’s going to be fairly constrained in terms of the policies she can really pursue.”

No matter the results of Sunday’s vote, market volatility could be here to stay until the legislative elections in June.