Latino truckers make pilgrimage to Our Lady of Guadalupe shrine 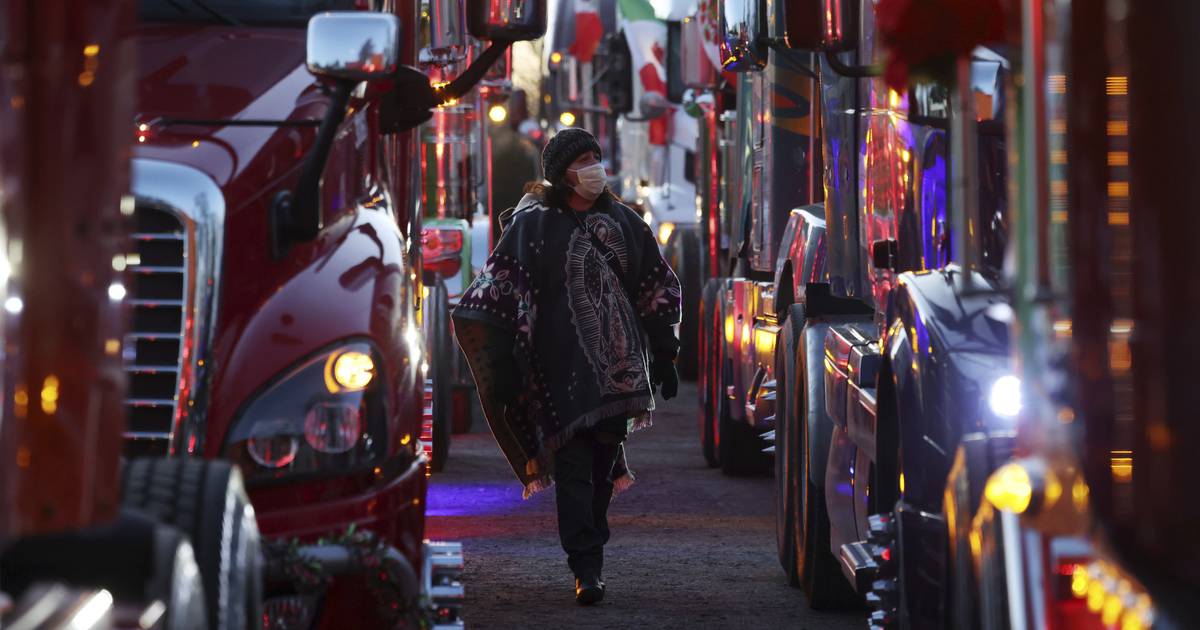 As a mariachi band played in a nearby parking lot, dozens of semitrailers parked one after the other on Western Avenue. Each one was adorned with images of Our Lady of Guadalupe, some with flags — Mexican and American ones. But instead of freight, this time the drivers transported only their families and friends.

They were getting ready for the procession to the Shrine of Our Lady of Guadalupe, an annual celebration of their faith and gratitude for answered prayers throughout the year — prayers that kept them safe on the road and those that gave them a steady income to provide for their families.

“It’s like a calling that you get to go visit her,” said Maria Vargas, the organizer of the pilgrimage that precedes the Feast of Our Lady of Guadalupe, celebrated on Dec. 12 to honor the Virgin Mary. “It’s something that you can’t see, you can’t explain, but you can feel. The Virgin Mary represents love and how important faith is in our lives.”

The convoy of truckers that takes off from Chicago’s South Side to the Shrine of Our Lady of Guadalupe in Des Plaines is one of the dozens of pilgrimages that mirror the traditional commemorations for the Feast of Faith in Mexico to commemorate La Guadalupe every year. Hundreds of thousands of Catholic devotees also visit the Des Plaines shrine by walking, running, biking and horse riding, making the Midwest celebration the second largest one after Mexico City and making the Des Plaines shrine the most visited monument of its kind in the U.S.

Most make the journey to the shrine to fulfill a promise — a manda — or give thanks to the Virgin Mary for her blessings. For others, it is a prayer for a specific need or concern.

For the truckers, this is a way to show the world the power of faith, Vargas said.

“Despite the struggles and the difficulties in the industry — the high prices of diesel and less work — we are still standing and able to provide for our families,” Vargas said.

Vargas is the co-owner of Mainland Corp., a family-owned flatbed transportation company that was established by Vargas and her brother, Ismael, two decades ago with only two trucks. Now they own 10 and manage others. Vargas, who serves as the company dispatcher, attributes their success to hard work, but also their faith.

She organized the first procession in 2015 as a desperate prayer for Our Lady of Guadalupe to heal her uncle, José, who had been diagnosed with throat cancer. At the time, it was only a few trucks and the company’s drivers who made the informal journey to Des Plaines in a caravan, she said. That same year she also walked in below-zero temperatures for several hours overnight to the shrine in Des Plaines.

“When there is nothing left, you cling to your faith,” she said.

A few months later, her uncle, a father figure for her and her siblings and the one who inspired their work in the trucking industry, was no longer in serious condition.

“Doctors couldn’t explain it, no one could, but the cancer was gone,” Vargas said. Since then, she promised that year by year, she would honor the Virgin Mary by organizing the pilgrimage. Her uncle, also a trucker, has joined it every year.

He bought his first semitrailer in 1999 after working many years in the construction industry after emigrating from Mexico. “He worked really hard,” Vargas said. He also discovered a job that was much less arduous and much more profitable than construction, which has historically been a livelihood for immigrants.

Vargas’ father had been incarcerated for most of her life, so her uncle became a father figure for her and her siblings. He helped Vargas’ brother get his commercial driver’s license and buy his first semitrailer. Then Vargas’ husband also went into the industry and in 2013, the three put all their life savings together to establish their own company.

“I’m so grateful for what we have been able to build,” Vargas said. So now it is their goal to inspire other immigrant families to join the industry. Working in trucking can help establish generational wealth and move immigrants away from heavy labor construction work, she said.

Just like with Vargas and her family, many of the drivers at the procession know each other. They are nephews, siblings, cousins and, sometimes, father and son, or just compadres — comrades.

Vargas said the number of Latinos has grown in the industry over the years, not only as drivers but also as business owners. She’s noticed that trend when she communicates with other drivers, and when she dispatches for or does business with other companies.

“The truck drivers should all be proud of themselves because it is a hard industry, a lonely and dangerous one,” she said. “It is also predominantly white, still.”

But 2019 government census data shows that more Latinos have been entering the transportation industry over the past decade, making up more than 12% of the trucking population and more than half of the foreign-born drivers in the country.

Mauricio Vargas, 26, became a truck driver for Mainland Corp. two years ago. “You get to experience the open road and the pay is really good,” he said. “It works for me and my family.”

Though they share the last name, Mauricio is not a part of Maria Vargas’ family. He was recruited to work with them by one of his older cousins. And this year was his first time partaking in the procession.

“This is important to me and my culture,” Mauricio Vargas said. “I’m glad work is steady and that my family is able to be here today.”

Those in the industry who do not speak English face even more challenges, said Maria Vargas. It’s important to know how to navigate the system and be familiar with technology to find a broker or a shipper and to deal with license issues, insurance and many other technicalities of managing their own businesses.

“Even though many don’t know the language, they still do it,” she said.

Victor Gonzalez, 50, began driving a commercial truck in 2004. Right before the procession began, he carefully pinned a small image of Our Lady of Guadalupe on the front of his blue truck. He drove more than two hours to be a part of the convoy to honor the mother of Jesus.

“There is so much to be thankful for; it’s good to take a day away from work to reflect on that,” he said.

He was one of the few Spanish-speaking drivers in the field when he first began, he said. Now, communicating in Spanish is much more comfortable and normal. “I bump into other drivers on the road that are Mexicans all the time now,” he said.

“It makes me proud even more that we’re all here together,” Gonzalez said.

The growth of Latinos in the essential industry is reflected in the way the pilgrimage has grown over the years. More than 100 truckers joined the procession Saturday, a week before the feast.

Maria Vargas said that she will continue to galvanize truck drivers to join the procession next year, this time praying that the industry doesn’t suffer, as a recession is expected.