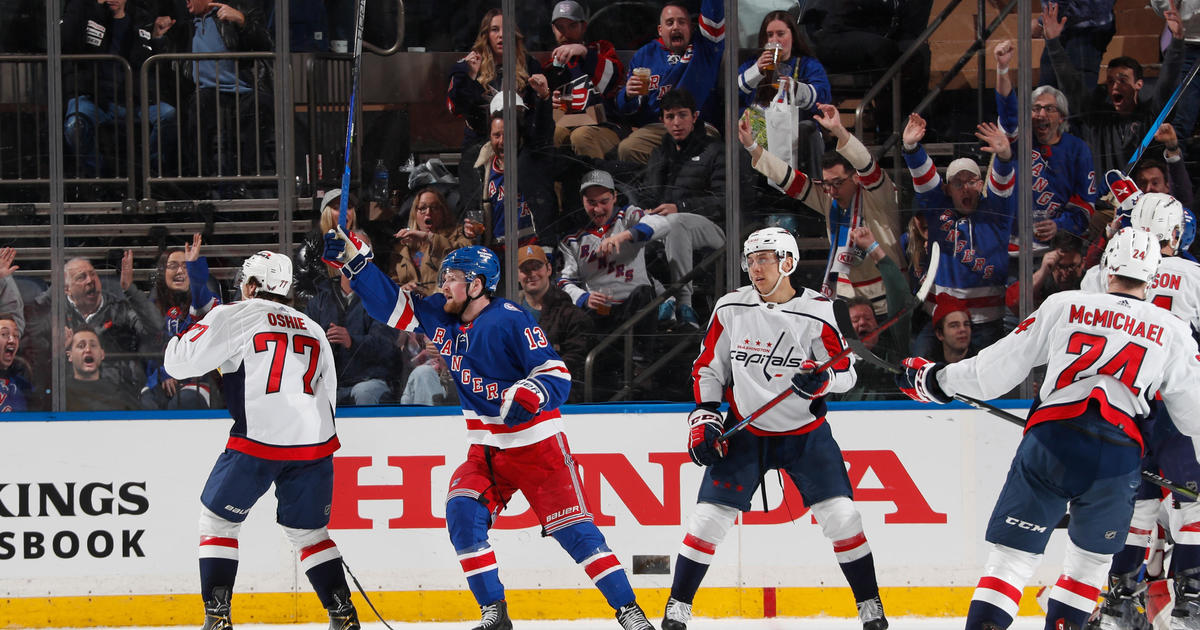 NEW YORK – Alexis Lafrenière and Mika Zibanejad each had a goal and an assist, and the New York Rangers beat the Washington Capitals 4-1 on Thursday night.

Chris Kreider and Barclay Goodrow also scored and Igor Shesterkin stopped 36 shots to help New York win for the fifth time in six games. The Rangers have won eight of their last 11 overall (8-2-1) and nine of 12 (9-1-2) at home.

“We played good from start to finish,” Lafrenière said. “It was a really good game against a really good team. … They’re having a really good year, too, so it was a good test for us and we responded like that.”

Alex Ovechkin scored and Ilya Samsonov had 17 saves for Washington, which had won three of its last four but was playing for the first time since beating Philadelphia a week earlier.

“I thought we had a lot of chances,” Capitals coach Peter Laviolette said. “Some of them were good looks, chances that you want to get, redirects, partial breakaways, shots right through the slot … we just could not beat him (Shesterkin), not tonight.”

Shesterkin denied TJ Oshie’s deflection of a point shot by Justin Schultz on a Capitals power play in the opening minute of the third, and then stopped Evgeny Kuznetsov’s follow attempt on the right doorstep. The Rangers’ goalie also had a save on a slap shot by Oshie 3 1/2 minutes into the period.

Kreider made it 3-0 at 6:57 with his 34th of the season. His deflection of Adam Fox’s point shot from the right side was stopped by Samsonov. However, the puck squirted to Samsonov’s right, and with the goalie out of position, Kreider knocked it into the open side. Krieder is two goals behind Toronto’s Auston Matthews for the league lead.

Goodrow scored on a backhander on a 2-on-1 rush with Kevin Rooney for his 11th with just under 9 minutes left.

“It was a real good team effort,” Rangers coach Gerard Gallant said. “Real good goaltending. It’s a shame he lost that shutout at the end but (we) had a good strong team game.”

Ovechkin spoiled Shesterkin’s bid for his fourth shutout of the season with 1:02 left.

“It’s kind of annoying that I let a goal in at the end, but it does not really matter if it is a shutout or not,” Shesterkin said through a translator. “The most important thing is to play the game, not let up any goals, finish strong especially in the last five minutes of the game. It’s either you finish strong or finish in a tie.”

Lafrenière deflected a point shot by Ryan Lindgren past Samsonov to make it 2-0 with 1:12 left in the middle period. It was Lafrenière’s 11th of the season.

The Capitals outshot the Rangers 11-7 in the first period, though New York had the better scoring chances. Zibanejad fired a one-timer off a drop pass from Lafrenière at the top of the right circle for his 20th with 7:03 remaining in the opening period to give the Rangers a 1-0 lead.

“He made a nice play at the blue line,” Lafrenière said of Zibanejad. “He was just behind me. I saw him so I just dropped it and he has a really good shot so that’s a good spot for him to shoot it.”

Zibanajad has five goals and 10 points in his last eight games. … Lafrenière is one goal away from matching his total as a rookie last season. … Fox has 11 assists and 13 points in his last 11 games. … The Rangers are 20-3-2 when scoring first and 18-1-3 when leading after two periods. … Washington’s John Carlson snapped a five-game goal- and point-scoring streak. … The Capitals are 2-12-4 when trailing after 40 minutes.

The Rangers honored former coach and general manager Emile “The Cat” Francis with video tribute and a moment of silence before the game. The Hall of Famer died on Saturday at the age of 95. Francis served as GM of the Rangers from October 1964 to January 1976, and was also the coach during parts of 10 seasons during that stretch. He put together the famed GAG line (for goal-a-game) of Rod Gilbert, Jean Ratelle and Vic Hadfield.

Capitals: At Philadelphia on Saturday night.

Rangers: At Pittsburgh on Saturday.

The CBSNewYork team is a group of experienced journalists who bring you the content on CBSNewYork.com.