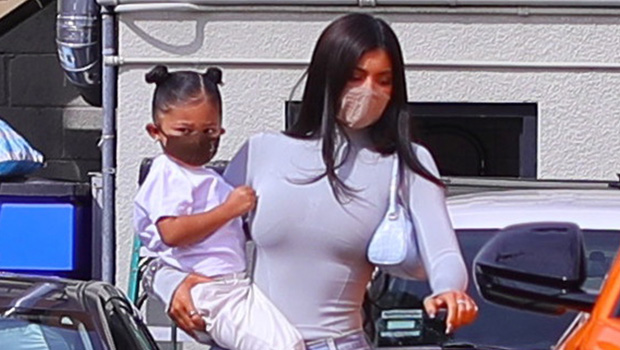 Stormi4, is living the dream by getting the star treatment and that includes diamond manicures with her mom, Kylie Jenner24. Kylie shared an adorable clip of her and Stormi getting glam on her official TikTok page on August 2. And while Kylie may be pampering herself for her 25th birthday on August 10, Stormi was probably just tagging along for all the fun!

Kylie captioned the post by writing, “nails with bestie”, on her TikTok. In the video, Kylie showed off her simple, yet lavish, manicure with diamonds. Her long nails were painted in a nude pink color with diamond embellishments on each nail, while Stormi chose a bright orange color with diamonds for summer.

The mom-of-two is often seen out and about with her four-year-old daughter on many mommy and daughter adventures. Recently, on June 8, Kylie took Stormi to Ulta Beauty to shop her mom’s makeup and skincare line in real life. Kylie shared a photo of the adorable outing and captioned the post, “took my angel baby gorgeous goosey girl to see @kylieskin & @kyliecosmetics at @ultabeauty still such a dream every time I visit. thank you to the entire ulta team always xx.”

Stormi is all about the glam life, as she is often seen on Kylie’s various social media accounts playing with her mom’s clothes and makeup. It has been four years of adorable mommy and daughter content for Kylie, as she welcomed Stormi with her boyfriend, travis scott, on February 1, 2018.

Kylie has been growing her family with Travis, as they welcomed their second child together back on February 2, 2022. She initially named him Wolf, but later took to Instagram to say that is no longer her son’s name and has yet to publicly reveal the new name of the 6-month-old baby boy.

Back on June 19, Kylie was all about family, as she posted a loving Father’s Day message to Travis on Instagram with the caption, “happy father’s day daddyyyyy we love you.” The photo showed the rapper eating in bed with his newborn son in his lap and his daughter Stormi napping alongside him.

It is clear that Kylie loves being a mom and spends as much time with her cute kids as her busy schedule allows, even if it’s a quick manicure. And this momma is definitely keeping it posh no matter what.