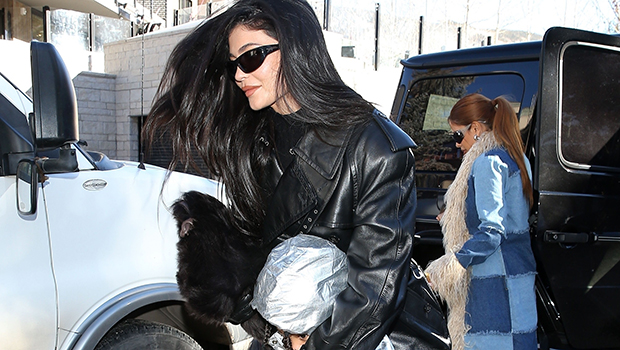 Kylie Jenner, 25, was all smiles on Sunday, December 11, during a snowy lunch date with her daughter Stormi. The makeup mogul and the adorable 4-year-old were photographed heading into Aspen’s upscale hotel The Little Nell, for an afternoon break during their snowy mountain getaway. Kylie looked like she was paying homage to Trinity from The Matrix in a black patent leather trench coat with matching pants and boots.  Stormi looked equally futuristic in a shiny silver puffer coat paired with baggy light-washed jeans. The loving tot clung to her devoted mom as they made their way into the 5-star hotel.

Kylie and her daughter landed in Aspen on Friday, Dec. 9. — along with Kendall Jenner, 27, and a select group of friends. During their girls’ getaway Kylie and Kendall took time out to poke fun at the #tequilagate drama from a recent episode of The Real Housewives of Beverly Hills. In a TikTok video posted on Sunday, Kendall and Kylie pay a visit to Kemo Sabe, a Western clothing store that was part of the RHOBH cast’s drama-filled season 12 cast trip to Aspen that included an epic fight between Kathy Hilton and Lisa Rinna.

In the hilarious video, Kylie and Kendall sip on shots of 818 Tequila while audio of the infamous argument between Lisa, 59, and Kathy, 63, plays overtop.  “I just want to try it cause it’s my friend Kendall Jenner’s tequila,” Lisa says in the voiceover, followed by Kathy saying, “I cannot f***ing believe what she just said.” As RHOBH fans know, Kathy got upset with Lisa after the former soap actress tried Kendall’s tequila line instead of Kathy’s Casa Del Sol tequila line during the episode.

all love for kathy and lisa

Kendall and Kylie had big smiles on their faces as they sipped 818 Tequila while staring at the camera. Kendall made it clear in her caption that she’s not taking sides in the drama and wrote: “All love for Kathy and Lisa.” Lisa reposted the video on her own TikTok and wrote, “In on the joke 🙌🏼 #myfriendkendalljennerstequila.”

Kylie appeared to be making the most of her trip to the winter wonderland and even managed to squeeze in some time in her bikini. Hours after landing in the winter wonderland on Friday, she shared sexy bikini shots of herself and her BFF Yris Palmer posing up a storm in an outdoor hot tub with snow surrounding it. She flaunted her  curves in a black bikini by Good American, her older sister Khloe Kardashian‘s brand. And that wasn’t the only time she promoted Khloe’s beloved brand. In other photos from the trip, Kylie modeled the same Good American  bikini, only this time she posed inside using gym equipment as her backdrop. She accessorized the black vinyl bikini with a luxurious white robe, tan shearling boots, and a pair of black sunglasses.

Devin Booker’s Dating History: All About His 2-Year Romance With Kendall Jenner & Past Loves

A job behind bars