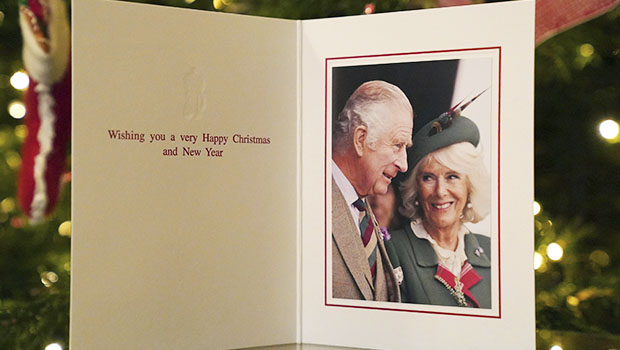 King Charles III and his wife, Queen Consort Camilla Parker-Bowles, have released their first-ever Christmas Card since he’s become the reigning monarch. The King, 74, and Camilla, 75, both looked regal in the elegant portrait taken by Sam Hussein at the Braemar Royal Highland Gathering on Sept. 3. The occasion was just a few days before the death of his mother Queen Elizabeth at the age of 96 on Sept. 8, 2022. “Wishing you a very Happy Christmas and New Year,” a message inside the card, placed in front of a Christmas Tree at London’s Clarence House, read in red font.

In the photo, the King looks straight ahead as he’s seen from the side and smiling. He wore a beige blazer and a crisp white shirt, along with a holiday-ready black and green striped tea. Meanwhile, Camilla is seen gazing at her husband of 17 years in a green ensemble with red accents and a matching green hat. She also wore a pearl of pearl earrings, reminiscent of the ones her late mother-in-law wore on a regular basis.

King Charles was present at the event to celebrate the opening of the Queen Elizabeth Platinum Jubilee Archway, cutting a rope to mark the occasion that also included a number of competitions including tug-of-war.

The former Prince of Wales became King Charles the III of the United Kingdom and and 14 other Commonwealth realms on Sept. 8, 2022, after the death of his mother who spent an impressive 70 years on the throne. Notably, Charles has yet to be officially coronated, however, the date has been set for the historic ceremony on Saturday, May 6 at Westminster Abbey. The event is reported to be a shortened version as Charles further attempts to modernize the monarchy. In a release, Buckingham Palace said that the event will be “rooted in longstanding traditions” but will also “reflect the monarch’s role today and look towards the future.” Specific details for the coronation — dubbed Operation Golden Orb — have yet to be confirmed outside of hte date.