King Charles ‘Concerned’ Harry & Meghan Will Cause ‘Irreparable Damage’ To Monarchy: ‘This Is A War’! 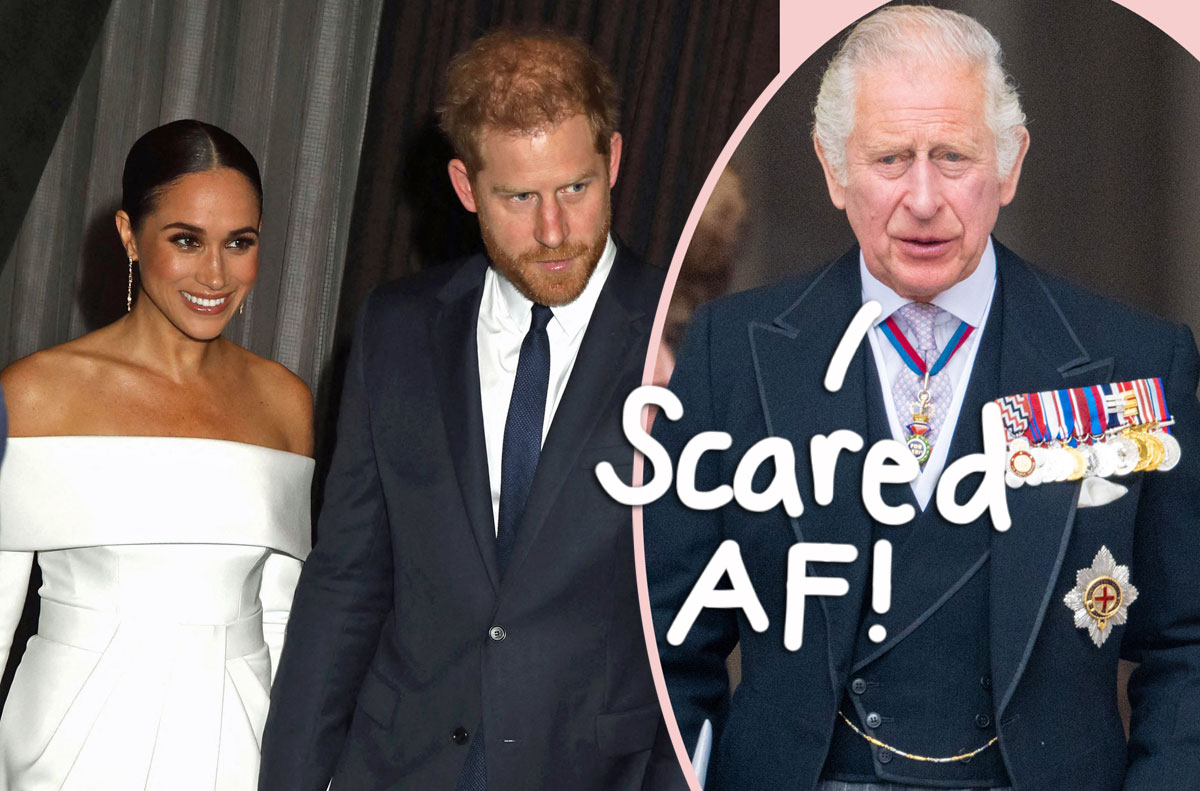 The royal family is bracing for impact!

With Prince Harry and Meghan Markle’s Netflix docuseries just hours away from premiering, King Charles III is “more worried” than ever before! According to a source on Wednesday via Us Weekly, the new monarch fears the monarchy might be damaged beyond repair following his son’s likely VERY explosive series! The source dished:

“The docuseries has left a bad taste in Charles’ mouth. He’s more worried about it than anyone.”

It’s not hard to see why. Not only is it his youngest son speaking out against him, but he’s the new king — and this drama has been causing major distractions during his first few months on the throne! Now, it’s only bound to get way worse!

According to the insider, the 74-year-old does not want to deal with any more “drama” after taking charge following his mother Queen Elizabeth II’s death. The confidant continued:

“While he’s putting on a brave face, behind closed doors he’s concerned that the docuseries will cause irreparable damage to the Monarchy.”

Royal expert Christopher Andersen also weighed in on the potential “retribution” the Duke and Duchess of Sussex could face from Charles for putting The Firm on blasting, telling Us on Tuesday:

“I think there will be muted responses to whatever specifics are in there, but we have to wait and see what the accusations are.”

“Muted responses”?? Now that doesn’t sound like the royal family we know! The King: The Life of King Charles III author also noted how the entire royal family is “horrified” about what might be mentioned in the series (after they’ve already faced some doozies in the past…), adding:

“I think they’re still holding their breath and waiting for the other shoe to drop. Well, there are two shoes that are gonna drop because it [airs in two parts, first on Thursday and then on December 15]. I just think the sense of betrayal is shifted over now to genuine combat mode because this is a war between the two [sides].”

It’s also a war between two feuding brothers. Prince William, who is reportedly ready to clap back at any false claims, is presumably “very angry” at his little sibling, Christopher noted:

“I’m sure he is very, very angry at his brother and cannot understand what he’s doing.”

But he might be feeling a little bitter, too, especially after Harry and Meghan’s trailer took away from his own press tour. As Perezcious readers know, he and Princess Catherine AKA Kate Middleton visited Boston last week, but the trip was “overshadowed” by the California royal’s drama, the author added:

“I’m sure they were stunned and shocked, even if they didn’t show it.”

Oh, we bet William was FUMING when the first look at Harry & Meghan dropped during his travels! Nothing like getting outshined by your brother… again!

But what does all this mean for Princess Diana‘s son and the Suits alum? Obviously, they aren’t afraid of telling their truth on such a big platform, no matter how upset it might make their England-based relatives… but should they be?

Well, Christopher also opened up about the potential fallout of the six-part documentary series and Harry’s upcoming memoir, Spare, musing:

“We’ll have to wait and see what happens, but Charles, he’s been handed this horrible problem. It’s the kind of thing that the Queen would’ve tried to just ignore for as long as she possibly could. But he’s not that kind of person.”

Even if he wanted to ignore all this mess, he can’t, the source continued:

“I don’t think he can. I mean, with the coronation coming up, you know, everyone’s always asking, ‘Are they going to be invited to the coordination? Are they gonna attend the coronation given all the drama going on?’ So that’s another question.”

Though if he had to take a guess right now, the expert thinks the pair might get to attend:

“I think that the retribution could be in the offering. I mean, I think [Harry] will be invited to the coronation, and I think they will go in May unless everything blows up in everyone’s face and irreparable damage is done.”

Insiders have previously claimed if Harry goes after Queen Camilla, the couple won’t be invited to the big event. But it also seems like an important day for the royals to show a front of unity. So, it’s hard to know what Charles will do, but we have a feeling the first few episodes of the Liz Garbus-directed TV show will help shed some light on his upcoming decision.

In the one-minute trailer, the Arcehwell founders made it very clear they’re coming after the institution, with Harry calling the palace’s relationship with the UK press “a dirty game,” adding:

But it’s not just the coronation in May that is up in the air — Charles holds a TON of power right now, especially when it comes to the Sussexes royal titles (including those for their children, Archie, 3, and Lilibet, 1):

“There are more things that Charles is in the position to do. … Charles always held the purse strings as Prince of Wales. Now he really holds the purse strings as king, and of course, [there’s] the titles and the charities and whatnot. There’s a lot left that Charles could do to punish Harry again. You know, we’ll just have to see if he takes that route or if he stays silent.”

If he feels betrayed, Charles can lay down the hammer! So, buckle up, because tomorrow’s premiere is just going to be the tip of this iceberg! Yowza! Hear way more on the controversy (below)!

Reactions?! Do U think Harry and Meghan WANT to damage the monarchy like Charles’ fears? SOUND OFF (below)!


Why stock bulls are sitting on their hands again