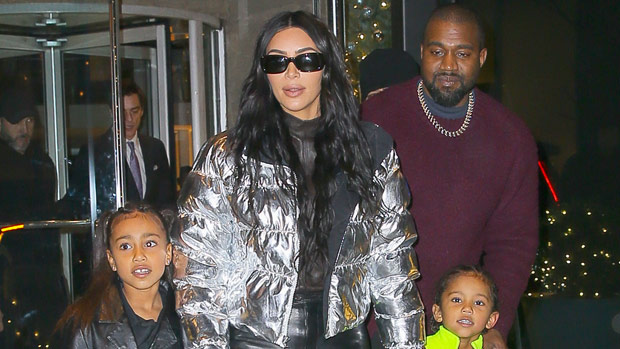 Kim Kardashian is still committed to co-parenting with her ex-husband Kanye West, even amidst the recent backlash for his antisemitic remarks on podcasts and social media. The rapper was seen getting out of a car in front of a hotel, before heading to his ex-wife’s home to celebrate their son Saint’s birthday on Monday, December 5, according to TMZ.

While the details of the party are not clear, the outlet reported that Kanye was at Kim’s home for “several hours,” and it’s not clear if other members of the reality star’s family were at the home for the party, nearly a week after their divorce was finalized. Part of their divorce settlement included that the rapper could attend the children’s birthdays if they come to an agreement.  Ye was seen holding a white bag as he exited the vehicle while wearing a gray jacket, covered with patches. It was seemingly the same one he wore during his controversial appearance on Alex Jones’ podcast.

Besides their divorce being finalized, the birthday celebration also came shortly after Kanye experienced much backlash for antisemitic remarks made on the Infowars podcast, including that he “likes Hitler.” His recent actions have led to him being temporarily suspended from Twitter and called out by a number of other stars, including President Joe Biden in a statement.

After Kanye’s initial antisemitic remarks, sources close to Kim revealed to HollywoodLife exclusively that she thought his comments were “vile and disgusting.” Even though she and her family were disturbed by the comments, insiders also said that she was still cautious about speaking about the comments in front of them. “As upset as Kim is about all of this, she’s being very careful not to say anything negative about Kanye in front of their kids and she’s asked everyone in her life to respect that,” a source told HL.

Kim celebrated Saint’s birthday by taking him and some friends to a Los Angeles Rams game on Sunday. She shared different shots of him at the game, and it seemed like the celebration was planned without Kanye. She penned a sweet message to her son in an Instagram caption. “Happy 7th Birthday to my baby boy. I love you so so so much! I love seeing you grow into the kindest soul ever. Mommy loves you forever and ever,” she wrote.

The SKIMS founder also commemorated his special day with a series of throwback photos and videos on her Instagram Story. “My chunk is so big now,” she wrote. “I wish he would wear his hair out of braids and twists sometimes.”

Despite the split and controversy, after the divorce was finalized an insider revealed to HL that Kim still “wants [their kids] to have a good relationship with” Kanye. “She goes above and beyond to facilitate that,” they explained.

If Elon Musk wants to defend free speech, how about Iran and China