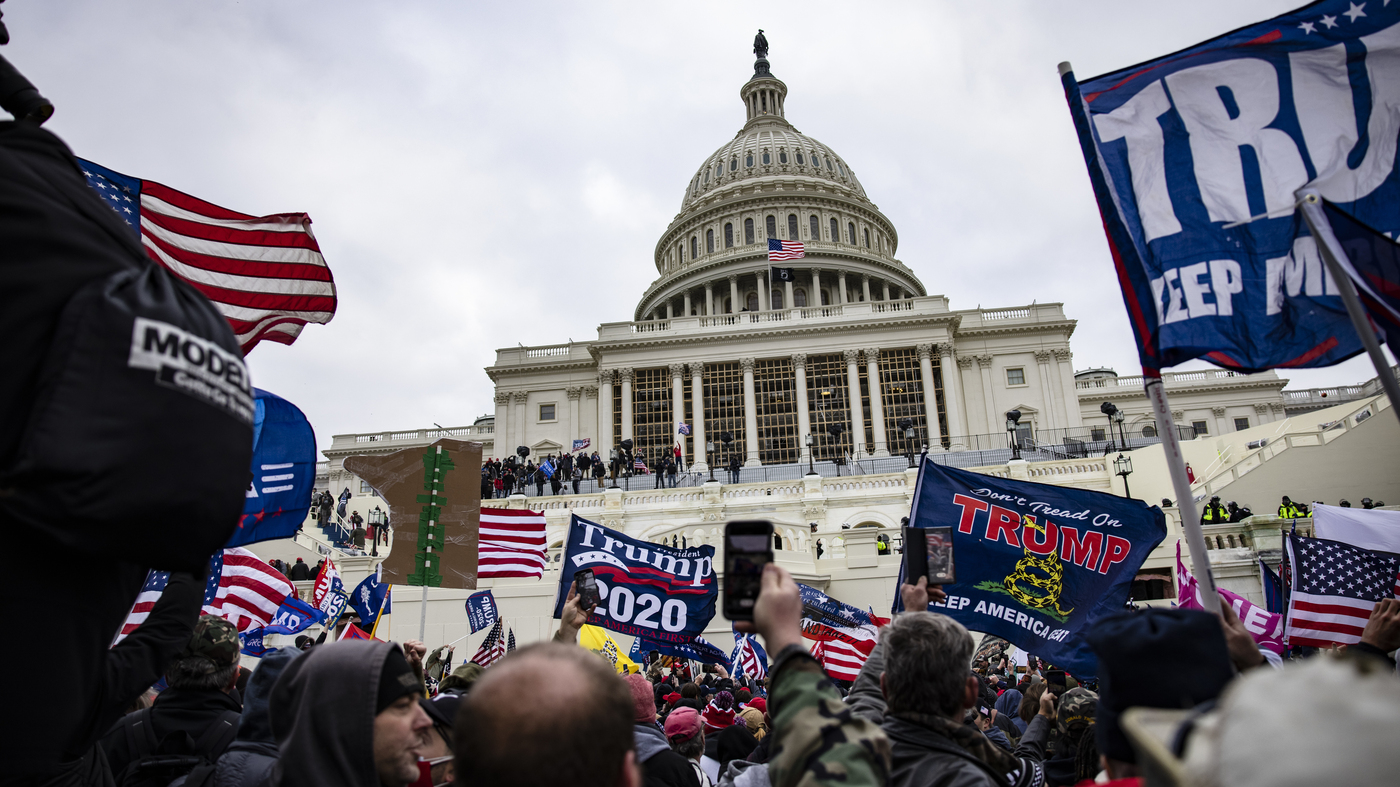 Pro-Trump supporters storm the US Capitol following a rally with President Donald Trump on January 6, 2021 in Washington, DC. They later went on to break in and attempt to stop the certification of the 2020 presidential election results.

Pro-Trump supporters storm the US Capitol following a rally with President Donald Trump on January 6, 2021 in Washington, DC. They later went on to break in and attempt to stop the certification of the 2020 presidential election results.

The House select committee on January 6 holds its first hearing on Thursday, in prime time at 8 pm EST, promising to weave together a narrative from the findings of its year-long probe with “previously unseen material” about the attack on the Capitol.

Some committee members have teased that there will be “bombshells” and the public will be surprised by what is revealed.

Pressed about the risk of overhyping the news, given that many details have already leaked out, committee member Jamie Raskin, D-Md., Told reporters this week: “We’re not in the business of entertainment. We’re in the business of trying to communicate to the American people the gravity and the immensity of these events. “

The majority-Democrat committee, charged with investigating the insurrection that pro-Trump extremists hoped would help overturn the 2020 election, has interviewed more than 1,000 witnesses, including members of former President Donald Trump’s family and administration, as well as law enforcement officials and aides who were under siege for hours on Jan. 6, 2021.

Thursday’s hearing, the first of six, will feature two live witnesses – Caroline Edwards, a US Capitol police officer and the first law enforcement member injured by rioters on the West Front plaza, and Nick Quested, a filmmaker who accompanied those who breached the building and captured the chaotic scene. Chairman Bennie Thompson, D-Miss. and Vice Chair Liz Cheney, R-Wy., will make opening statements and the panel will also show videotaped depositions from senior Trump White House, campaign, and administration officials.

The committee is expected to issue a voluminous report with recommendations in September. Some members have already indicated they back changes to the Electoral Count Act, the law governing the process for Congress to count and certify electoral votes. While the committee has the power to make legislative recommendations, it cannot bring any criminal charges and can only make a criminal referral to the Justice Department.

Here are key areas the committee will discuss during the hearings.

What were President Trump, his friends, staff, and family members doing?

Former President Donald Trump greets the crowd at the “Stop The Steal” Rally on January 06, 2021 in Washington, DC. Trump supporters then marched to the Capitol and some violent protesters attempted to stop Congress from certifying the 2020 election.

Former President Donald Trump greets the crowd at the “Stop The Steal” Rally on January 06, 2021 in Washington, DC. Trump supporters then marched to the Capitol and some violent protesters attempted to stop Congress from certifying the 2020 election.

Cheney has repeatedly raised questions about the lack of information about what President Trump was doing at the White House when violent protesters breached the Capitol. The rioters threatened lawmakers, and the vice president, chanting to “hang Mike Pence,” and there was a period of time with no response from Trump. Hours earlier he told his supporters on the Ellipse outside the White House “we fight like hell. And if you do not fight like hell, you’re not going to have a country anymore.” Trump suggested he would walk with his supporters to the Capitol but instead returned to the White House.

Several committee members point to 187 minutes that afternoon where it’s unclear what the president was doing as a key focus of their investigation. They have worked to fill in the gap through interviews with multiple witnesses, including Ivanka Trump and her husband Jared Kushner. They’ve also subpoenaed documents, including the president’s daily schedule and phone log.

According to select committee aides, Thursday’s hearing will feature testimony from those inside the White House and the Trump campaign, including family members. These will be video clips of taped depositions.

What is the “fake electors” scheme?

The committee issued at least 20 publicly announced subpoenas tied to a wide-ranging scheme across several states to submit a slate of fake electors to Congress as a way of altering the results of the 2020 presidential election in hopes of keeping Trump office.

The subpoenas included Kelli Ward, the chair of the Arizona Republican Party, in addition to two GOP political candidates in swing states. Committee demands for testimony and records were also issued to the Republican nominee to be Pennsylvania’s next governor, Doug Mastriano, and the GOP candidate Mark Finchem, who is running to be the next secretary of state in Arizona.

In some cases, state officials helped organize events where members of Trump’s legal team and others shared false claims of voter fraud. The effort continued up to the day of the attack. For example, Finchem said he had to deliver “evidence” to then-Vice President Mike Pence to postpone the certification of the election results.

The efforts have also drawn the attention of prosecutors in multiple states.

Where did the money come from and where did it go?

What the committee has learned about the financial story behind the Jan. 6 attack on the Capitol has remained one of the most closely held parts of the probe. However, it has shared some clues through publicly announced subpoenas and court filings.

For example, a Republican National Committee lawsuit revealed the panel was looking into a push by former President Donald Trump for donations after he lost his 2020 bid for reelection.

It was part of a central question the panel hoped to answer: Did Trump find new ways after his loss to keep the money coming by shifting to a “Stop the Steal” effort?

The panel has also issued subpoenas for banking records and shared in letters to certain subpoenaed witnesses that it’s trying to track down appearance fees for the Jan. 6 rally – that is, whether any of the speakers collected payment that day.

A combination of dark-money groups, nonprofits and super PACs funded the rally before the attack, but the panel has also probed whether any of that money help aid the insurrection.

Who were the armed and violent groups storming into the Capitol?

Protesters gather at the door of the US Capitol Building on January 06, 2021.

Protesters gather at the door of the US Capitol Building on January 06, 2021.

The committee has also taken strong interest in the extreme right-wing groups that breached the Capitol. Among their publicly announced subpoenas, the panel last year demanded testimony and documents from the Proud Boys and the Oath Keepers.

It also demanded testimony for Henry “Enrique” Tarrio, who on Jan. 6 was chairman of the Proud Boys; Elmer Stewart Rhodes, president of the Oath Keepers; and Robert Patrick Lewis, chairman of 1st Amendment Praetorian, a less well-known group that provided security at multiple rallies leading up to Jan. 6.

The groups were part of a larger organized network that helped launch the attack on the Capitol, the committee’s members have said.

The interest in the groups and their leaders has also escalated in recent months in the criminal probe led by the Justice Department. Several members of the Oath Keepers and Proud Boys have also been charged with seditious conspiracy, and some have led to convictions with guilty pleas.

Who cooperated with the committee – and who did not?

Select committee aides emphasize the “vast majority” of witnesses have cooperated and helped the committee amass “a mountain of new evidence.”

But some senior former officials in the Trump administration and House of Representatives refused to appear or provide documents. Former advisor Steve Bannon refused to cooperate and was ultimately charged with contempt of Congress by the Justice Department last November. His trial is slated for this summer. Last week Peter Navarro, former trade adviser, faced a similar charge.

Former White House Chief of Staff Mark Meadows initially cooperated and turned over a trove of emails and text messages, but then reversed course and refused to a closed-door interview and to turn over remaining materials the panel requested. Meadows sued the panel, and his attorney raised concerns about executive privilege, even though the Biden White House has waived any claims to that protection.

Former senior aide Dan Scavino also defied a subpoena. The House referred the refusals from both him and Meadows to the Justice Department, which informed the committee last week they would not pursue contempt charges against them – news the panel criticized, arguing they had central information to provide in the investigation.

In a rare move, five sitting House Republicans were also subpoenaed for testimony and documents. Most notably, House Minority Leader Kevin McCarthy, R-Calif., Who publicly talked about his phone conversation with Trump on the day of the attack, was asked to appear voluntarily and then given a subpoena. McCarthy, along with Rep. Jim Jordan, R-Ohio, Rep. Scott Perry, R-Penn., Rep. Mo Brooks, R-Ala., And Rep. Andy Biggs, R-Ariz, have all pushed back against the subpoenas and demanding details about evidence and questions they would face – making it all but certain they will not participate in any fashion. It’s unclear whether the panel would vote to hold any in criminal contempt, and if it did that dispute could end up in court.