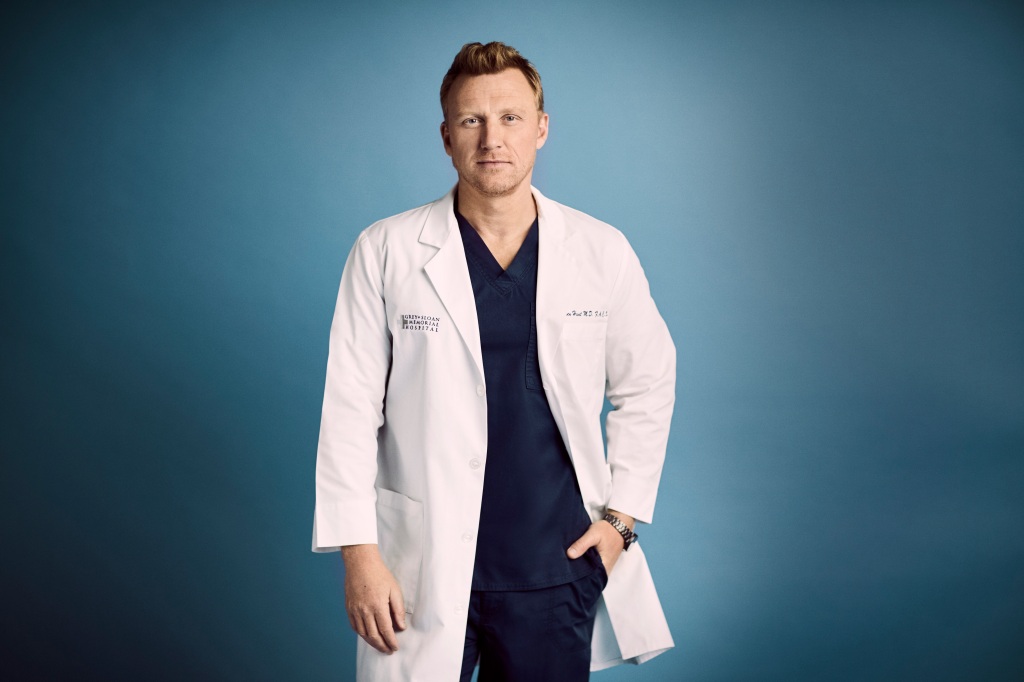 SPOILER ALERT: The story includes details about the Season 18 Episode 9 of Grey’s Anatomy, “No Time To Die”.

The last time we saw Kevin McKidd’s Owen Hunt, he was in an SUV, rolling down a ravine. The Station 19-Grey’s Anatomy midseason premiere crossover revealed Owen’s fate. He was rescued by the Station 19 crew and taken to Gray Sloan Memorial where he was treated for his extensive injuries, including to his spine and a shattered leg. He underent a successful emergency surgery on both.

Also successful was Farouk’s “miracle” heart transplant surgery despite a bruise the donor heart had sustained in the crash.

Amid the joy, there was heartache too. Schmitt was having a very hard time after losing his first patient in the OR. The shock sent him into a catatonic state as he spent the episode vigorously scrubbing his hands until his friends intervened.

All three passangers in the SUV that crashed in the winter finale were dealing with the aftermath. While Owen was the only one seriously hurt physically, Teddy had a difficult time seeing him in pain while Hayes was struggling with the ethical dilemma posed by Owen in the finale when, thinking that he would most likely die, he asked Hayes to continue his efforts helping terminally ill soldiers get drugs for physician-assisted deaths.

Hayes confronted Owen who was undeterred in his commitment to help the veterans. Facing serious repercussions as an accessory if he did not report his friend, Hayes opted to resign, telling Bailey that he was moving back to Ireland with his children. (Richard Flood, who plays Hayes, is said to be leaving Grey’s Anatomy.)

In romantic developments, Nick flew in to see Meredith, Amelia and Kai had another date while Joe and Link hooked up after months of sexual tension and cohabitation.

In an interview with Deadline, McKidd spoke about the crash and its aftermath, Owen’s decision in the car to sacrifice himself so Teddy and Hayes can live, the long recovery in front of him and what else is in store for the rest of the season. McKidd also addressed the issue of euthanasia.

DEADLINE: When you got the script for the winter finale, were you concerned about Owen’s fate?

MCKIDD: I remember back in Season 5 or 6 when we had the shooter episode, and Owen was shot in the chest. I remember that table read distinctly because I had only been on the show for two years. The table read was, Owen falls on the floor. Christina yells, “Meredith, is he alive?” and then I had to turn this page to see what Meredith’s response was. I remember that page turn was in slow motion to find out. She said, “yeah, he’s got a pulse” and I was oh, OK.

It kind of felt like a repeat of that, which is the life of an actor. Such a strange life we ​​live, at the stroke of a pen, a character could be gone. It’s been an interesting, nerve-wracking time.

DEADLINE: What do you think about Owen’s decision to send Teddy and Hayes to safety and stay behind in the car, knowing that he would likely die?

MCKIDD: For better or for worse, Owen is quite an impulsive man and has been for many years. He goes with his gut, sometimes he gets it right, sometimes he gets it wrong. In this instance, sitting in the front of the car, he sees the writing on the wall, and I think it was the right call. it was pretty noble of him to do that. I love that about Owen. He is very flawed as a man – as many people are – but he got a very good heart at the end of the day. I think what he is doing with the veterans is all heart, putting himself in jeopardy, bending the rules, that’s the way he operates. Seeing these other vets in so much pain, he found it morally very hard to deal with it but he is led by his heart.

DEADLINE: What is your position on physician-assisted death?

MCKIDD: It’s a very hard topic. I think on balance, I support it as a concept because there is that thing of Do No Harm as an axiom for doctors but some of these [patients] are in so much pain that by withholding some way to help them, you are causing harm to that patient. Any case of euthanasia or assisted death has to be taken on its face value and on a case by case basis. I think in principal, the only correct criteria would be, if nothing else can be done medically, and there is so much discomfort and so much pain on the part of the patient, ethically I do support it.

DEADLINE: What is ahead for Owen in terns of recovery?

MCKIDD: He is in a lot of pain. He was mangled, mangled up in this car at the bottom of this ravine. He really took one for the team. His legs are in a complete mess. Basically what we will see is a slow road to recovery. And also there is some real medical jeopardy, he has a spinal injury as well as his leg injury. The spine injury can potentially paralyze him or make him very compromised for the rest of his life. So he is not out of the woods by any means.

In Station 19, they recover his body in that mangled car wreck. He has a long way to go, it’s going to be interesting. It’s been fun playing him. He is a man of action, Owen, and to see him really struggle with his physicality has been kind of fun to see in a strange way, walking around on crutches has been fun too. And there are a couple of episodes where I get to lay down a lot which is always pleasant, to get to lay down.

This brings out a lot of stuff between Owen and Teddy as recovery is frustrating for him. He just wants to get back to work, he wants to get to doing good medicine, to help the veterans, continue that project he feels very passionate about.

He gets impatient, and also there is a big debate between Teddy and Owen as things go forward. As the truth about what Owen has been doing comes out, Teddy has a lot of feelings about that so there is a lot of emotional fallout from this crash but also the work he has been doing with these terminally ill veterans.

This is going to cause a lot of emotional fallout in the second half of the season. It’s very intense.

DEADLINE: You mentioned crutches, which is a good sign, but can you say whether Owen will be walking again?

MCKIDD: I can not say.

DEADLINE: We talked about Owen’s physical recovery? What about his mental recovery? He has a long history of PTSD, and the crash was certainly a traumatic experience.

MCKIDD: In the episodes we’ve shot so far, he is dealing with the physical side. We have not quite gotten to the psychological side. Most people, when they have gone through something like that, they would physically get themselves back from the brink and then the psychological fallout happens later. We haven’t quite touched on that but I’m interested to see where that leads, whether it would trigger his PTSD or not.

DEADLINE: What will the impact of Owen continuing to help veterans be on his career? We saw Hayes quit over fears that it might be illegal.

MCKIDD: In Washington State, physician-assisted death is actually legal. But there are some gray areas within it. Owens does not follow the correct protocols. He does put himself in the harm’s way, and it’s very interesting to see how the rest of the season plays out because I can not tell you what happens but it’s a thing that I think Owen wants to get back to, the work that Noah , his veteran friend, was doing, trying to put pressure on Congress and take it to that level in trying to advocate for these veterans, get better care and bring more awareness. As far as potential fallout for Owen, that will continue to be a thread through the rest of season.

DEADLINE: How do you feel about Owen being the reason Hayes quit his job?

MCKIDD: The character of Hayes was already reassessing his life in Seattle, and I think this was probably another factor in his decision, he’d already been mulling over where his life was headed. I think morally, Hayes feels very conflicted. Owen sees Hayes’ life so Hayes and and his child can go on and have a fruitful life so, in a strange way, Hayes kind of owes something to Owen but he also does not quite know where he stands on the ethics of physician- assisted death so I think it just creates that area where Hayes is. It pushes him towards a decision he was already on the way to.

DEADLINE: How were you able to keep Owen’s fate secret over the past couple of months?

MCKIDD: I’m terrible at keeping secrets so I decided… If you notice on my social media feed, I have been absent which is not like me. I just thought, I’m going to spoil something, so I have been very away, and I think it helped create that mystery. Once the episode airs, I will be back online more. A lot of people have been asking me, I’ve been itching to tell them but could not.