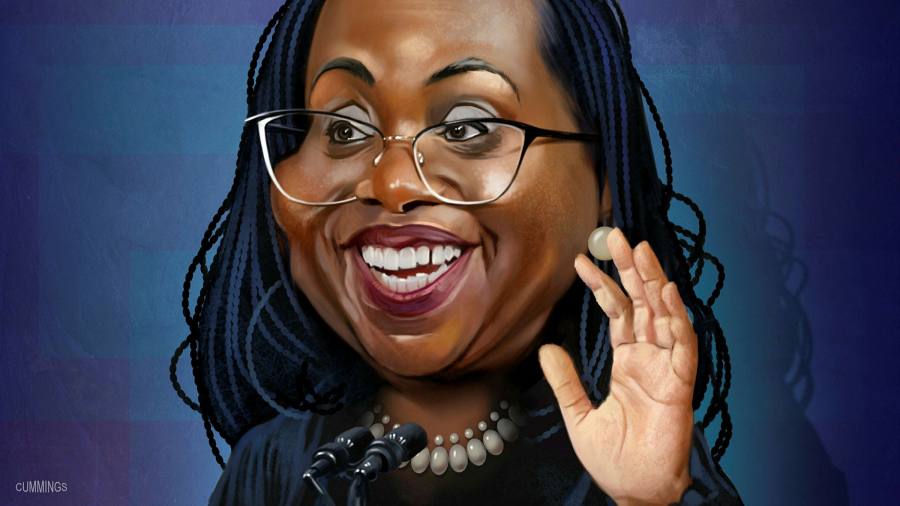 It was around the 20th hour of intense questioning by the U.S. Senate judiciary committee that the voice of Ketanji Brown Jackson, Joe Biden’s Supreme Court nominee, finally broke. The appeals court judge, who is on the cusp of becoming the first black woman to sit on America’s highest court, slid a tissue under her glasses as she told 22 senators what message she would give to the country’s youth.

Jackson, 51, recalled how, as a freshman at Harvard University, she was walking across campus feeling as if she did not belong when she encountered a black woman she did not know. “She looked at me and I guess she knew how I was feeling when she leaned over as we crossed and said ‘persevere’.”

“I would tell them [the American youth] to persevere, ”she added after a pause, as her husband reached out to one of their two daughters.

This emotional exchange came amid the public vetting of Jackson’s nomination in a grueling four-day hearing. The judiciary committee will now vote on whether to advance her nomination, after which the full Senate will vote whether, as now seems likely, Jackson will fill the lifetime Supreme Court seat vacated by the retiring Stephen Breyer.

As a black woman whose parents attended legally segregated schools and who is “fairly certain” her ancestors descended from slaves, Jackson’s confirmation would change the course of history. Since the court’s founding more than 230 years ago, 108 of its 115 justices have been white men. Only five women have sat on the country’s most powerful bench and only two African Americans, Thurgood Marshall and current justice Clarence Thomas.

Supreme Court appointments, long a landmark for any administration, have become increasingly fraught and polarized. But some court watchers have argued that Jackson’s confirmation last year by a bipartisan Senate vote to the federal appeals court – and before that to the US sentencing commission and as a federal district judge – could work in her favor.

Jackson’s appointment would have significant resonance in a country facing deep fissures around race and criminal justice. She would become the first Supreme Court justice with experience as a public defender – an attorney who represents criminal defendants, typically those who cannot afford their own representation.

“You’re a person that is so much more than your race and gender. You are a Christian, you’re a mom, you’re an intellect, ”said Cory Booker, a Democratic senator from New Jersey on the judiciary committee. “[But] it’s hard for me not to look at you and not to see my mom, not to see my cousins. . . I see my ancestors and yours. ”

This is also Biden’s first – and probably only – opportunity to make his mark on the court and fulfill his promise to nominate a black woman. Former President Donald Trump made three Supreme Court appointments, cementing a 6-3 split between conservative and liberal justices. Jackson’s confirmation would not ruffle the bench’s ideological make-up at a time when it is considering cases on issues such as abortion, voting rights and affirmative action, but it would ensure its liberal wing does not lose further ground.

Kenneth Feinberg, a lawyer who worked with Jackson in the early 2000s, believed she “would be eminently qualified to succeed Justice Breyer”. “She has firm views but I remember her being very, very accommodating.”

Richard Rosenthal, a former schoolmate and appellate lawyer, recalled the day her acceptance to Harvard was announced at their large, often underfunded public high school. “The entire class immediately leapt to its feet, exploded in applause, and ran over to Ketanji to embrace her,” he said during the hearings. “Nobody was jealous, nobody was resentful. . . and nobody was at all surprised. ”

After Harvard Law School, Jackson kicked off a career that ranged from private practice to the US sentencing commission. She clerked for three judges, including Breyer and then rose steadily through the ranks, becoming a judge nearly a decade ago, first in the district court and then in the Washington DC appeals court, typically seen as America’s second most important.

Jackson’s background has been lauded by both parties. But this week the opposition took aim at her legal record, focusing on both individual sentences and her work as a public defender linked to Guantánamo Bay, the US military base in Cuba that became home to a prison after the September 11 2001 attacks. Jackson told the committee that public defenders do not pick clients and that they “[stand up] for the constitutional value of representation ”.

Confirmation hearings are known for antagonistic exchanges and constant interjections – Senator Ted Cruz interrupted Jackson approximately 15 times during his 20-minute slot, as well as asking whether she agreed with the idea that “babies are racist” – but she remained stoic throughout.

Never though was her tone as deliberate as when she explained what drives her. “I have dedicated my career to ensuring that the words engraved on the front of the Supreme Court building, ‘Equal justice under law’, are a reality and not just an ideal,” she told the committee. Her nomination was a “historic chance. . . to inspire future generations and to ensure liberty and justice for all ”.