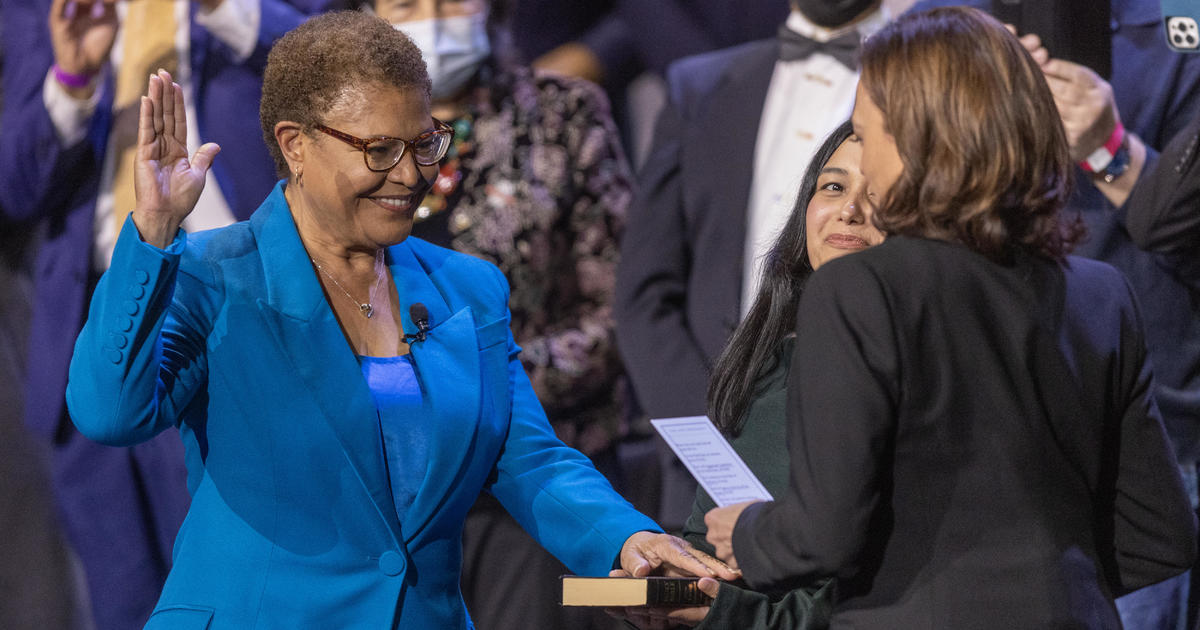 Karen Bass has been sworn in as the 43rd Mayor of Los Angeles in a historic inauguration at the Microsoft Theater.

The ceremony got underway at 1 p.m. with early arrival encouraged and masks required for attendees. The ceremony was initially scheduled to take place outside of City Hall, but due to the rain, was moved indoors.

Instead of being sworn in as tradition would have it, on City Hall’s steps, the city adapted to the powerful storm moving through the area, posting the letters “LA” in the mold of the LAX sign to her right and a picture of the Spring Street City Hall steps behind the stage.

Ready to get down to business, Bass said she would spend her first day in office declaring a state of emergency on the homeless issue plaguing the city.

“I will start my first day as mayor at the city’s emergency operations centers, where my first act as mayor will be to declare a state of emergency on homelessness,” she said, noting that she will “recognize the severity of our crisis and break new ground to maximize our ability to urgently move people inside, and do so for good.”

She plans to house 17,000 people in her first year in office, hoping to “welcome housing to every neighborhood.”

“We know our mission: We must build housing in every neighborhood,” she said. “We cannot continue to overcrowd neighborhoods that are already overcrowded.”

Bass also touched on another pressing issue facing her in her first day as mayor.

“Of course, we must stop crimes in progress and hold people accountable,” Bass said. “Some neighborhoods have asked for additional officers, and we will deliver. But what neighborhoods are asking for and what they need is as diverse as our city.”

“Making history with each of you today is a monumental moment in my life and for Los Angeles,” Bass said during her speech.

Bass, 69, was a social worker and community activist before representing Los Angeles in the state Assembly for six years, where she also served as the first African American speaker.

In 2010, she was elected to Congress and served Los Angeles before coming back home and becoming the first Black female mayor of Los Angeles.

“I believe that times of inflection require reflection — I believe, it’s time for Angelenos to remind ourselves where we come from and who we are,” she said.

She takes over in a time of turmoil, as the Los Angeles City Council struggles to conduct business through a racially-charged scandal involving several prominent members, but also at a time of hope, as the council will hold more women than ever before after the five newest members swore in over the weekend.

Council President Paul Krekorian spoke at the event, predicting that Bass is just the leader the city of Los Angeles needs to bring people together.

Bass will replace fellow Democrat Eric Garcetti, who came to the end of two terms on Saturday. He now awaits further plans pending his nomination to become U.S. ambassador to India, which has hit a snag due to opposition from some on Senate, concerned with sexual misconduct allegations against a former Garcetti staff member.

She was named mayor-elect in November after a close race with her competitor Rick Caruso, the billionaire developer who spent more than $100 million on his campaign.

Apple Car can be a success without a wow factor