Karen Bass comes home to LA — and all its problems 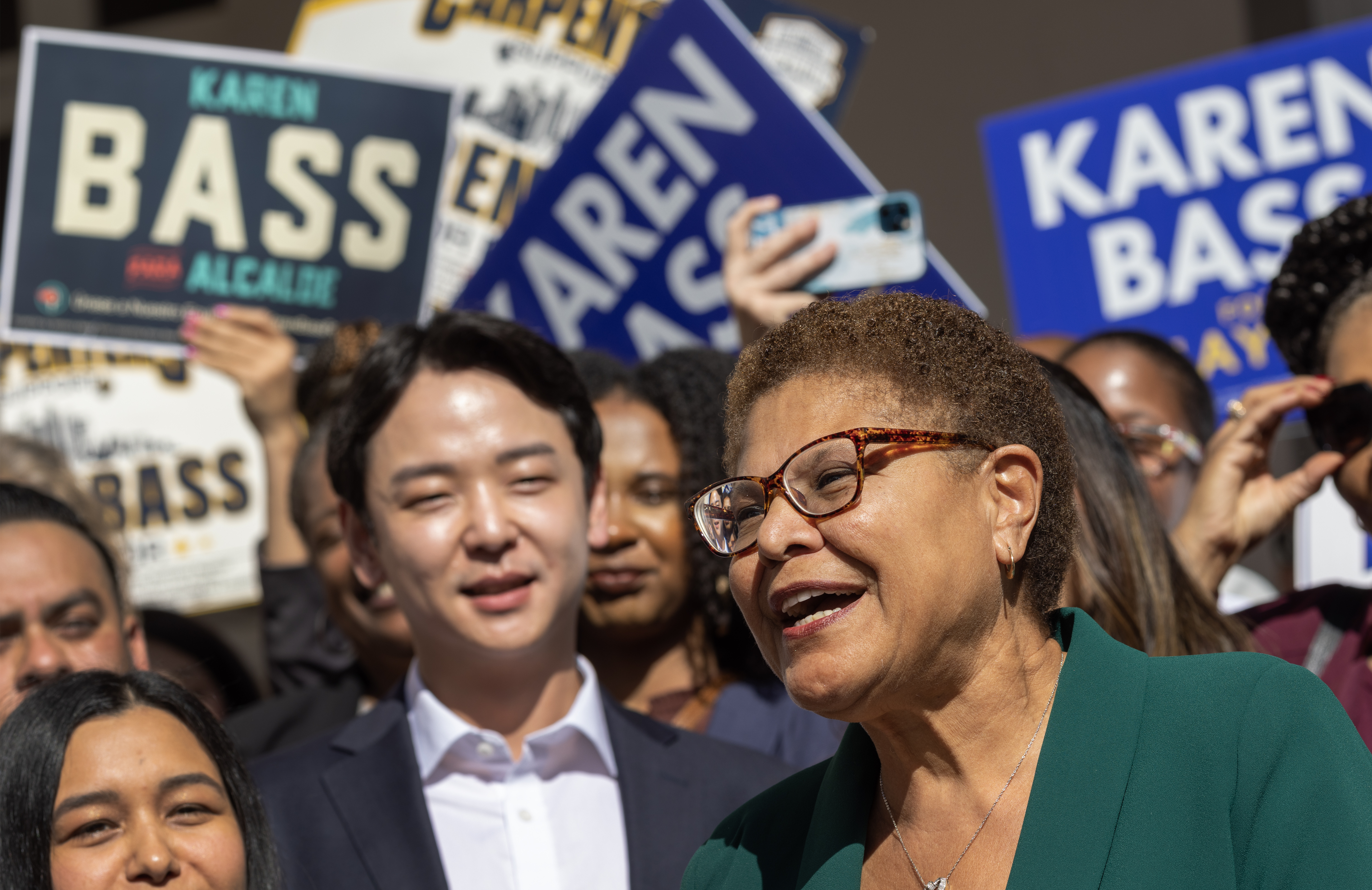 Sunday’s inauguration, which will include a swearing-in by Vice President Kamala Harris, represents a historic moment for Los Angeles: Bass will be the first woman to lead the city.

Here are five of the biggest challenges Bass is staring down as she takes office:

Angelenos want homeless people moved off the streets and sidewalks

Ask any political consultant or city official what singular issue will define Bass’ time in office, and you’ll receive the same answer: homelessness.

Los Angeles’ homeless population has exploded to 40,000 people in recent years, an estimate that some experts believe is on the low side. Bass has cautioned that the crisis can’t be solved in four years, but offers a plan that would still go beyond what any previous mayor has accomplished.

On the top of that list is getting 15,000 people off the streets within her first year. That plan relies on finding unused city land to build more temporary housing, and improving services to get people into jobs and permanent living situations. She has also committed to declaring a state of emergency to leverage more state and federal funding.

The number of federal dollars that flow to Los Angeles will almost surely dwindle with Republicans taking control of Congress. And funding alone hasn’t been enough to stop the city’s homeless population from growing in recent years.

Adding to the pressure on Bass is the impending 2028 Olympic Games, which will put an international spotlight on Los Angeles.

“There’s got to be visible improvement made on the homelessness issue relatively quickly,” South said. “Or I think it will cause trouble for Karen Bass.”

Crime surge has residents on edge

Crime and public safety were key issues in the mayoral race, with both Bass and her billionaire opponent, Rick Caruso, vowing to shore up the city’s police department and require the LAPD to institute more effective policing practices.

Violent crime has been on the rise in Los Angeles since 2019, with gun violence hitting a 15-year high last year. Property crime has risen 15 percent in the same period. Bass herself was the victim of a break-in this year, which she described as “very traumatic.” Among other items, the burglars stole two handguns Bass had stored in a lockbox in her closet.

Bass has proposed hiring hundreds of officers to bring the short-staffed LAPD back up to its full force of 9,700 (police officials have blamed an administrative bottleneck in the application process) and authorizing new training for the department that includes de-escalation tactics and a focus on officer accountability.

She also plans to establish a city crime victims fund to help people pay for funeral costs and “the physical, financial, and emotional repercussions of crime.” Los Angeles’ mayor also appoints the chief of police; Bass hasn’t indicated she’s looking to replace Chief Michel Moore, but she has vowed to set “clear goals and expectations” for him and the city’s Police Commission.

Bass will be expected to take a leading role to mend the wounds reopened this fall by the leaked recording — a task complicated by the city’s long history of racial tension.

A longtime community organizer who founded a nonprofit in 1990 aimed at empowering Black and Latino communities harmed by the crack epidemic, Bass leaned on her background while appealing to voters angered by the elected officials’ betrayal.

But vocal community activists say the healing can’t truly start until Council Member Kevin de León, who was part of the recorded conversation, leaves his position. The former leader of the state Senate has shown no sign that he plans to step down.

Bass has talked little about de León’s fate since calling on him to resign in the scandal’s immediate aftermath. If a serious recall effort is launched, she’ll be expected to take a side in a campaign that could cost millions and inject drama in the early stages of her time in office.

Bass will be just one official in a vast ecosystem of political heavyweights, each of whom has the ability to help or undermine her goals.

Building consensus — and balancing egos — will be key to delivering on her promises.

In addition to the City Council, she’ll have to deal with the formidable Los Angeles County Board of Supervisors, a five-person body that oversees a $40 billion annual budget and provides critical services to city residents. The board will be key to helping Bass procure the necessary services to tackle the homelessness crisis while working in tandem with the city, which is responsible for sheltering people and building affordable homes.

She’ll also be expected to work with the city’s vast and powerful labor organizations, like the Los Angeles County Federation of Labor, whose former president, Ron Herrera, was among those caught in the leaked conversation. Then there is Los Angeles Unified, the largest school district in the nation, which is facing immense pressure to give teachers a 20 percent raise.

An economic downturn could threaten progress

Los Angeles is already unaffordable for many of its 4 million residents, and Bass could be expected to do more with less as inflation continues to squeeze families and the once-flush state deals with a projected budget deficit of $24 billion.

Supporters and former colleagues have praised Bass’s ability to craft a budget even when times are tough. She led the state Assembly during the 2008 financial crisis, when California was forced to make serious cuts to schools and public services. She was the last legislative leader to work with a Republican governor — Arnold Schwarzenegger — and has been credited with keeping the state’s budget afloat during one of the toughest economic periods in its history.

Bass will have broad authority over the city’s budget, and every year will submit an initial spending proposal to the council, much like the governor does with the Legislature. Last year Los Angeles passed a nearly $12 billion budget, which included $1 billion for homelessness.

The city also needs to prepare for the 2028 Olympic Games. It has the sports venues and hotels to handle the crowd, but transportation improvements in the famously car-centric region are critically needed. Bass has said she plans to use money from the recently passed federal infrastructure law to rebuild streets and sidewalks and expand public transit.