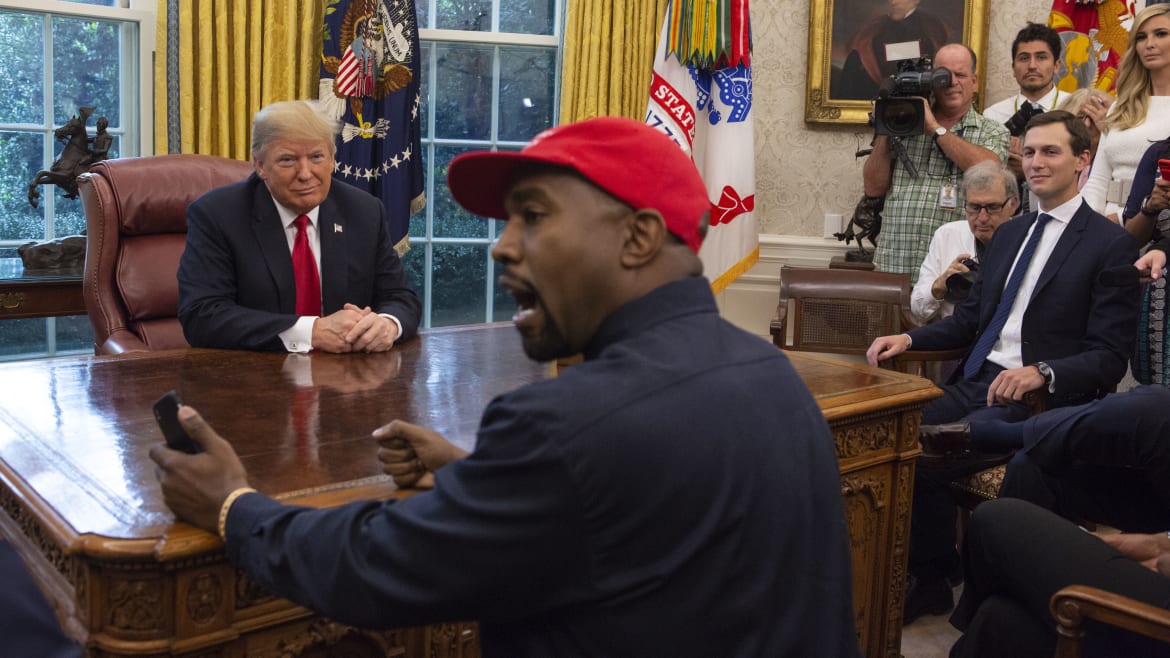 The rapper, 45, announced last week that he plans to run for president again in 2024.

“The thing that Trump was most perturbed about [is] me asking him to be my vice president,” Kanye said in one of the videos published on his recently-unlocked Twitter account on Thanksgiving night. “I think that was, like, lower on the list of things that caught him off guard.”

“It was the fact that I walked in with intelligence,” he says.

Even after the video was posted, Kanye’s adviser took aim at Trump in no uncertain terms.

Of the videos and Ye’s relationship with Trump at present, Milo Yiannopoulos told The Daily Beast: “As a connoisseur and an intimate of several mercurial billionaires, it wouldn’t surprise me in the least to find them laughing about it in the near future. Assuming Mr. Trump isn’t too wounded, of course.

Though, he continued: “Trumpworld is in crisis tonight.”

“In my personal view, the former president has only himself to blame. This is an overdue reckoning. President Trump has neglected and betrayed everyone who loved him most, from the cancelled personalities who helped him into office to his abused supporters on January 6. He might like to reflect on whether he could have done more to acknowledge and support his most loyal fans over the years. Habitual, callous ingratitude has a way of catching up with you.”

As the video continues, the rapper, who was dropped by Adidas last month after an unrelenting stream of anti-semitic comments, goes on to praise Fuentes.

“Nick Fuentes, unlike so many of the lawyers and some of the people [Trump] was left with on his 2020 campaign, he’s actually a loyalist,” West said in the clip. “When all the lawyers said, ‘forget it, Trump’s done,’ there were loyalists running up in the White House, right? And my question would be, ‘Why, when you had the chance, did you not free the January 6ers?’”

As he speaks about counseling Trump to “go and get these people that the media tried to cancel,” the video flashes photos of former Trump campaign manager Corey Lewandowski, Trump ally Roger Stone, and conspiracy theorist Alex Jones, who has been ordered to pay over $1 billion to the families of the Sandy Hook victims for lying about their children’s deaths.

The disgraced shoe designer and musician said Trump dismissed his presidential aspirations with a “would-be mob-esque” story in which he claimed that he granted clemency to former federal prisoner Alice Johnson for West. West’s ex-wife Kim Kardashian had campaigned heavily for Trump to pardon Johnson.

In the same video, Kanye reveals that Trump insulted Kardashian, though the insult itself is bleeped. Trump allegedly told Kanye, “you can tell her I said that.”

“I was thinking, like, that’s the mother of my children,” West said.

The mention of Kardashian comes as West faces an internal investigation from Adidas – which carried his Yeezy shoe brand from 2013 until last month – into allegations that he harassed his former employees. In an anonymous letter obtained by Rolling Stone this week, several ex-employees claimed that West belittled them and harassed them by showing them pornography, including graphic images of Kardashian herself.

In the bizarre campaign announcement video, West said that Trump wasn’t too happy with his plans for higher office.

“When Trump started basically screaming at the table telling me I was gonna lose, I mean, has that ever worked for anyone in history? I’m like, ‘wait, hold on Trump, you’re talking to Ye,’” the Grammy winner said.

Of the two other videos posted Thursday night, one is made up of news clips about Adidas dropping West, while another one mostly features a monologue by Fox News host Tucker Carlson in support of West.

Instead of US Dollars, Ghana Plans to Purchase Oil with Gold