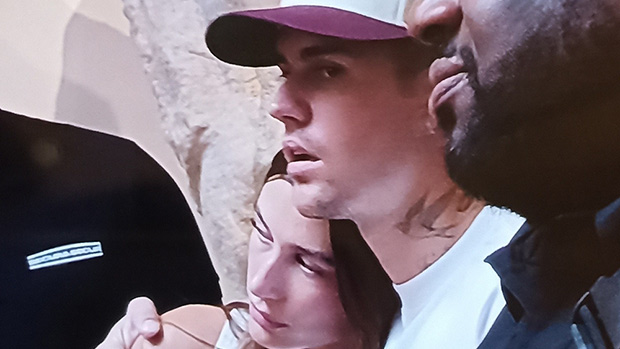 Justin Bieber bless his wife Hailey Bieber, close as they visited the Galleria dell’ Accademia di Firenze in Florence, Italy on Aug. 1. The lovebirds checked out some artwork at the Italian museum, with Justin wrapping an arm around Hailey’s shoulder and pulling her close to him. She rested her head on his shoulder as they both took in what they were seeing at the gallery. Both stars kept it casual for the outing, with Hailey rocking baggy white pants and a white crop top, and Justin in yellow shorts and a white t-shirt.

The lovebirds are spending time in Europe amidst Justin’s Justice world tour. Justin returned to the stage in Lucca, Italy on July 31 after taking nearly two months off following his Ramsay Hunt Syndrome diagnosis. Justin had to postpone 14 United States tour dates between June 7 and July 3 due to his medical condition, which left half of his face paralyzed. The virus attacked the nerves in Justin’s ear, as well as his facial nerves, leaving him unable to move one side of his face as he recovered.

Luckily, after a few weeks of rest, relaxation and facial exercises, Justin was finally able to return to the stage. He has five more European tour dates in August before heading to South America in September. Then, the tour will head to South Africa, followed by a run in the Middle East and Asia in October and the beginning of November. The end of November will take Justin to Australia and New Zealand, and at the beginning of 2023, he’ll be back in Europe for three months. The tour is due to wrap in Poland on March 25. So far, the rescheduled dates for the postponed June/July shows have not been confirmed.

Amidst Justin’s medical crisis and the aftermath, Hailey has been his rock. The two first dated in 2015 and 2016, but did not reconcile until the spring of 2018. They were back together for just a few weeks before getting engaged that summer, and they tied the knot at a courthouse that September. One year later, they celebrated with close family and friends at a larger wedding. Now, they’re truly putting that “in sickness and health” to the test!