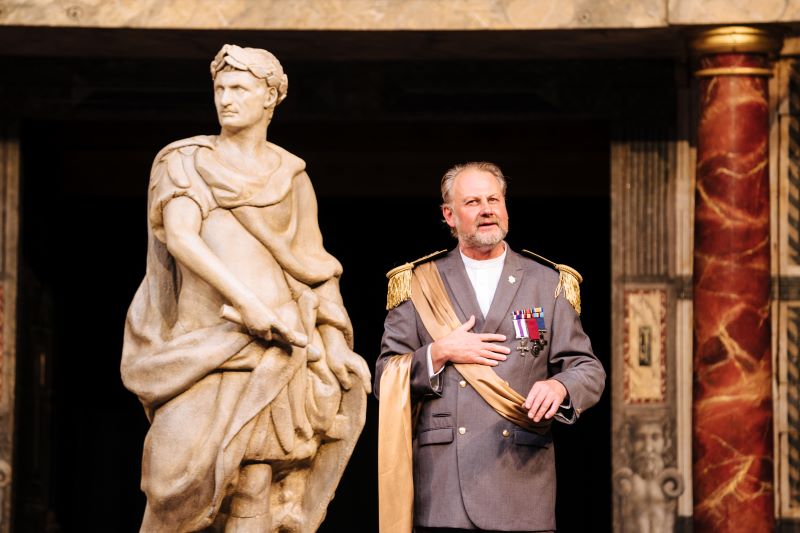 Julius Caesar at the Globe Theater is a very funny and delightfully bloody political romp, with as much to say in the modern-day as ever before.

Diane Page’s modern take on Julius Caesar at the Globe Theater opens with a cobbler spurring the audience into chanting football songs supporting the victorious Caesar on his return to Rome after defeating his arch-rival Pompey.

It’s a neat trick that sets the tone for what follows, making the audience take on the role of the huddled masses and getting them to repeat essentially whatever the characters want them to say.

And it’s a device that is repeated in a pivotal scene at the start of the play’s second act, as the cunning Mark Antony whips the onlookers up into a frenzy over the death of the titular character.

It’s hard, as Antony labels his political opponents “honorable” whilst simultaneously sneering at the mere suggestion, not to think of that same word being used in a different house of political theater, just across the Thames.

Truthfully, throughout the play, it’s hard to escape a sense of Page’s exasperation with politics, as it’s treated by a small number of men as nothing more than a game, a tool to get what they want, at the expense of the thousands watching on .

The use of gendered language throughout the play is a deliberate choice, as is the lack of female politicians in the original play – something Page has attempted to rectify by casting two women in the lead roles of Cassius and Brutus.

Politics in Shakespeare’s time was a man’s game, and the choice to leave the gendered wording in even as Page thrusts women at the heart of the story reminds us that in many respects it still is – women entering the theater of politics do so on men’s terms .

The notion that only a small number of individuals dictate the lives of many perhaps informed the decision to stick with a smaller cast – only eight people play all of the play’s roles.

It’s a decision that largely pays off, as they all acquit themselves very well, and all of the cast get moments to shine as a result.

Shakespeare veteran Dickon Tyrrell seems to embody the role of Caesar, Samuel Oatley’s Mark Antony comes into his own when the character does, and Anna Crichlow is note-perfect as the play’s moral core in Brutus.

For me though, the star of the show was Charlotte Bate as the completely and utterly over-the-top Cassius, Brutus’ close friend who entices her to murder and treason.

Bate plays all the different elements of Cassius with 110% enthusiasm, creating a character who is so dramatic that their actions never feel out of character, no matter how eyebrow-raising.

The fact that the hilarious Jack Myers as the dry-witted Casca runs Bate close in the play’s first act, only to fade away when he takes on the more serious Octavius ​​in the second, also says a lot about how the play runs out of steam towards the end.

Julius Caesar is fundamentally a play about oratory and political theater, and for the first two-thirds, when it stays firmly in that zone, it thrives as larger than life characters cry about the importance of democracy whilst plotting to seize power themselves.

As such, it’s the highly dramatic elements of that first act, culminating in the delightfully silly murder of Caesar – completely with fake blood splashing those unfortunate enough to get too close to the stage – that really sell the production.

However in its final stages, the play veers away from the political theater towards a climactic battle and the smaller cast starts to feel like a weakness as they chop and change roles and the characters are given less room to breathe.

Overall though, Julius Caesar feels like a show that embodies why Shakespeare should still be held in the Globe Theater – with a delightful sense of drama and political theater that drags the audience along with it.

It comes highly recommended and you can buy tickets for the Globe here.

The production is also heading on tour throughout the summer and you can find out where it’s heading and buy tickets to other venues here.