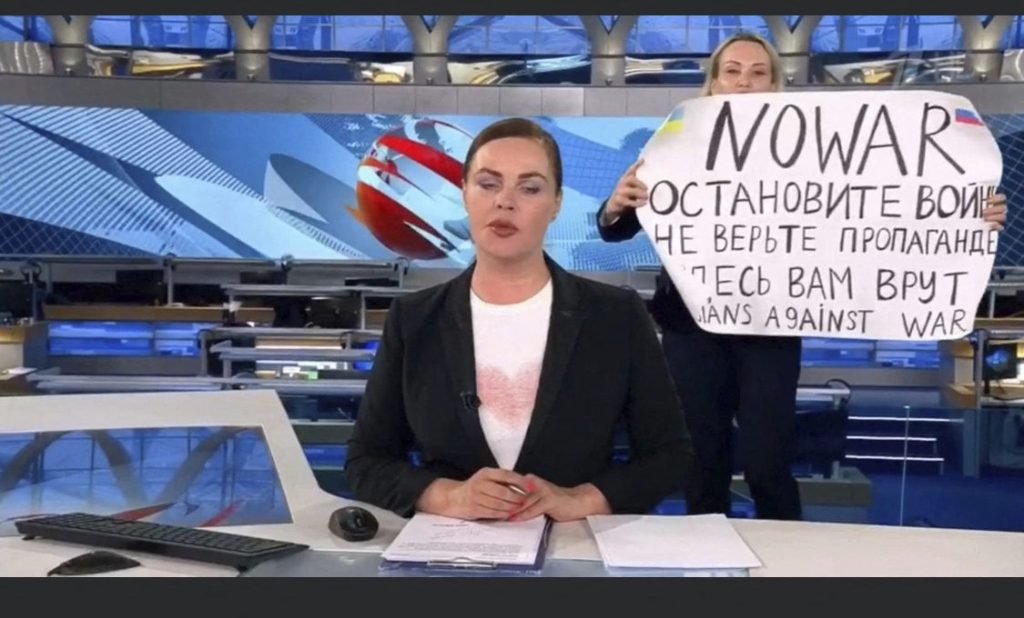 When Marina Ovsyannikova stormed the live broadcast of Russia’s flagship news program on March 14 to protest Vladimir Putin’s invasion of Ukraine, it was a valiant moment that quickly reverberated across the world. The journalist and editor spent six seconds holding a sign saying, “No war, they are lying to you,” on the Kremlin-controlled TV Channel One where she worked.

Her brief act of defiance cost her 14 hours of questioning and detention, with no access to legal help. But her protest at Russian propaganda during the height of the country’s invasion of Ukraine had the intended outcome: the incident was watched globally by more than 250 million people, catapulting her into being a global symbol for freedom of speech. Ovsyannikova, who was born in Odessa before Ukraine became an independent state, calls herself a patriot who made a “spontaneous” decision to stand up against a war she felt Russia had no right to be starting.

It’s not clear whether she could face further action from the Kremlin, which has deemed her act as “hooliganism”, but the journalist has no regrets and even declined France’s offer of political asylum, choosing instead to continue reporting from Russia.

The mother of two has been vocal about her opposition to Putin, the war and Russian propaganda, which she says is permitting the “zombification” of Russian people. Speaking to initiative Faces of Democracy, she said, “Democracy means being able to live as a free person, however, my home country Russia has recently turned into a totalitarian state that is increasingly closing itself off from the outside world.”

Ovsyannikova recently joined German newspaper Die Welt as a freelance correspondent where she’ll report for the paper and its TV news channel from Russia.