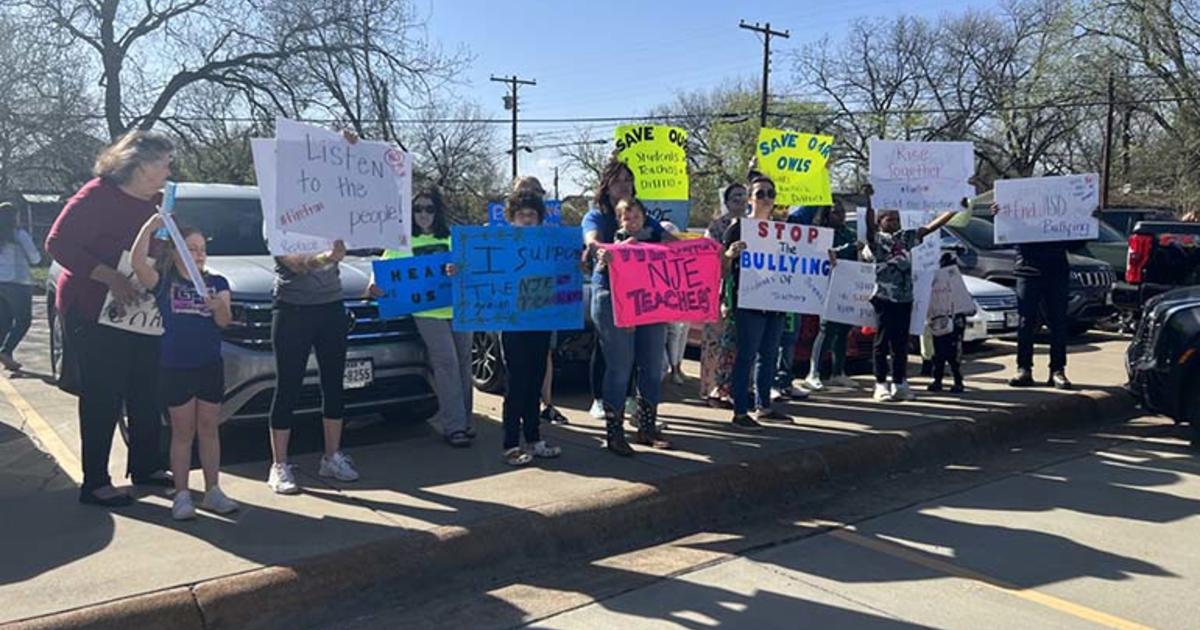 JOSHUA, Texas (CBSDFW.COM) – Parents and students rallied outside of Joshua ISD’s board meeting on Thursday, April 8 calling on the superintendent to resign and showing support for a group of teachers who they said were forced to resign.

The district said the teachers were making kids who brought lunch from home go through the line to get free school lunches and bring to the teachers, but parents were upset with the district’s handling of the situation.

Some Joshua ISD parents said there is an ongoing bully problem at some of the schools in the district. They’ve been voicing their concerns about bullying to district leaders for awhile, but their concern is growing because the district has not taken enough action.

“It’s just so many stories coming forward, so many parents that are concerned, so many children that have had this issue,” parent Stephanie Arredondo said.

Arredondo was emotional as she talked about what she believes is an ongoing bullying problem within Joshua ISD, affecting her children.

“Physical assaults, one of them caused a concussion,” Arredondo said.

“A busted ear drum, choking, slamming heads into lockers, a lot of racially inappropriate things said to my son,” another parent, Terrie said. She did not want to give her last name.

Other parents also shared personal accounts of what they describe as bullying.

“Every time we address it, we say ‘hey, this is going on this is bullying,’ we’re always told it’s not,” Terrie said. “It’s not fair to keep telling us it’s not. It’s not fair to tell our kids how they should feel.”

The school district superintendent, Fran Marek released a statement saying “When we are made aware of a bullying concern, administrators conduct an investigation using the Texas School Safety Center’s bullying checklist.”

The statement goes on to say, “Texas Education Code (TEC) §37.0832 identifies bullying as a single significant act or a pattern of acts by one or more students directed at another student that exploits an imbalance of power and involves engaging in written or verbal expression, expression through electronic means, or physical conduct ”

The full statement can be found on the district’s website.

“Although we received a statement from the district – that we are grateful for – that they are going to start action,” Arredondo said. “It’s not soon enough.”

Arredondo said she brought this issue to the board back in December. Now, she hopes something will change.

“They need help, and it needs to be now,” Arredondo said.

Joshua ISD told CBS 11 that it will release an open-ended survey about bullying for parents to fill out on April 18th.

There were annual bullying meetings in the past, but the district said due to a lack of attendance they discontinued them.

The district also said that it is also considering holding a community forum so parents and students can make their concerns heard directly to district leaders, but no date has been set for that yet.

Alexis Wainwright is an Emmy Award-winning journalist. Before moving to the Lone Star State, she was a reporter and performed some anchor duties at KARK in Little Rock, AR.