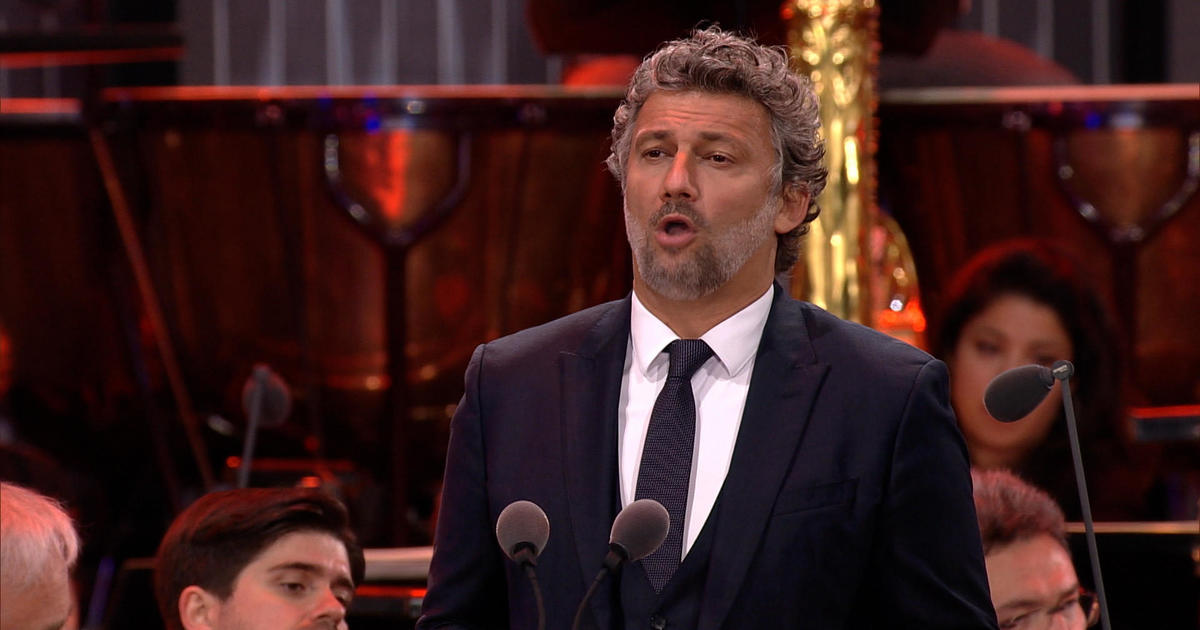 60 Minutes has always had a soft spot for the opera. Maybe because, like us, opera is in the storytelling business – with big, sweeping improbable tales and characters.

Tonight we introduce you to one of its star storytellers – a 52-year-old tenor from Germany, named Jonas Kaufmann.

Critics applaud Kaufmann’s singing, range and swagger on stage. Others point to his history of high-profile cancellations.

Interrupted by the pandemic, we have been following the tenor for years. Now, we finally raise the curtain, so you can hear Jonas Kaufmann make one of opera’s most famous arias, his own.

Even if you do not know its name, it’s likely you’ve heard, and perhaps even hummed along to “Nessun Dorma.”

Jonas Kaufmann: It’s very difficult to describe– or define the magic of this song.

In the first year of the pandemic, Jonas Kaufmann enchanted an audience desperate for live performances at the Vienna Philharmonic Summer Night Concert.

Jonas Kaufmann: If you look carefully at this song, it’s very simple. Because you have (SINGS). It’s like, “Okay,” like almost like a children’s melody. It’s not really a complicated m– but that’s the trick. The best hits are the less complicated. It does– its magic each and every time. Also for me. I’ve b– been performing this– this– aria so many times. And the chill is still there.

The chill is still there for his fans, too. It’s not only his good looks – he’s been compared to George Clooney – and his broad vocal range. Jonas Kaufmann has a gift for acting a role and not just singing it. Audiences line up to listen to Kaufmann perform lesser known works as well. Last fall, we joined him on his American recital tour.

At the Kennedy Center in Washington, he offered an evening of songs – poetic German songs – accompanied only by a piano.

Norah O’Donnell: It’s been three years since you’ve been performing in America. What’s it like to be back?

Jonas Kaufmann: Well, it’s great to be back to have at least a part of that spirit– that I used to see here. You see audiences that are way more cheerful, that– are very emotional, that start to cry.

Norah O’Donnell: Opera can always be emotional. But even now you notice the audience is more so.

Jonas Kaufmann: It has an more powerful– impact and effect on– on people now. But I’m actually so selfish, I do this for myself mostly, because it’s a dream come true to be able to make your living on something that has always been your dream, So I thought, “Yeah, it’s great to have the audience and everything, but– if– if it would be only me and they would still pay me, I mean– (LAUGH) they– it would be fine too. ” It’s so wrong– so, so wrong, because now, having done many of these– virtual concerts, I had to learn the hard way how important an audience is.

Norah O’Donnell: Not only did the audience lose something without live opera. You lost something.

Jonas Kaufmann: It’s not only the applause. It’s the energy in the room changes immediately. If there is a couple of thousand people attending something, watching, witnessing, holding their breath, you feel their presence. And– and this is something that– that we’ve been missing all enormously.

Kaufmann’s breakthrough moment came with his Metropolitan Opera debut in 2006. One critic noted he displayed “a big, shiny voice.” Another said he looked like a rockstar.

When we saw him backstage at the Met in 2018, Kaufmann was swashbuckling his way through the part of the outlaw in Puccini’s La Fanciulla del West.

With his repertoire of more than 70 roles in German, French, Italian and English – all of which he is fluent in – Kaufmann is stereotypically Teutonic in his methodic approach to his music.

“Opera is a competitive sport,” he likes to say. And he keeps his voice as precisely tuned as a Porsche at Le Mans.

At the Bavarian State Opera, we watched Kaufmann in his pre-game warmup – preparing his equipment for a three-hour contest with Verdi’s “Aida.”

Norah O’Donnell: We saw you with the towel in your mouth. (LAUGH) What’s that about? (LAUGHTER)

Jonas Kaufmann: Yeah. This is something very special. Sometimes the voice is there, yes. You wake up, and you think (SINGING), “Ah.” It’s all ready. And then comes another day, and it just takes a while for the voice to wake up and to get rid of all the dust. So what do we do when we want to wake up our voice, when we start warming up? We change things to make it sound like we want it. And this is wrong. We do not have the patience. But if we have the towel in the mouth, you do not hear that. You do not hear the difference. You just let the voice do its thing. And once it’s ready, it’s ready.

Kaufmann’s confidence in his voice allows him to concentrate on inhabiting the characters he plays. He is recognized as a better actor than most opera stars.

Jonas Kaufmann: I tried to master my– my vocal technique, so that I could open my mouth, and sing as if I would just speak, and concentrate on the emotion, concentrate on the – the layers underneath, on the subtext. And – for me, acting is nothing artificial.

Jonas Kaufmann: I want to know more about the human being that stands behind this armor, and maybe feels completely different. So that’s what I’m interested in.

The voice of a tenor, by nature, demands heroics… and nerves of steel – something it took him years to develop.

Norah O’Donnell: Why do you think tenors capture people’s imagination?

Jonas Kaufmann: The tenor register is a very unnatural register. It’s very high for– for a male voice. You can not just switch into, let’s say, soprano register, and– and– and sing the ha-ha-ho-ho, whatever. That would be, let’s say, easier. But you– you have to go with your full body voice. There’s so many– factors that have to fall into place in order to– to make this happen, to sing, let’s say, a full body high C on stage– that there’s always a little risk in it.

Norah O’Donnell: You can not fake it.

Jonas Kaufmann: You can not fake it. Because you– you fail, everybody sees it. Everybody hears it.

In 2015 – a few years and a few gray hairs ago – we traveled to Kaufmann’s childhood home in Munich.

Norah O’Donnell: It looks the same? Have they changed it much?

Jonas Kaufmann: No. I mean it was another yellow.

It was here, sitting under the piano while his grandfather played, that his love for classical music began. Kaufmann joined the choir early when his hands were still too small for the keyboard.

Jonas Kaufmann: I still remember that feeling when I was– when I was there for the first time, having the impression to, let’s say– taking a bath in the sound.

Norah O’Donnell: What do you mean, “Taking a bath in the sound?”

Jonas Kaufmann: No you see, you’re surrounded by– by the sound. By the harmonies. By the voices. If you are– sitting as a spectator– as an audience, the– the sound comes from one direction– but it– it’s not the same as if you are just in the middle of it. I got goosebumps right away. Because I– I loved it so much. And so I–

Norah O’Donnell: And how old were you?

Jonas Kaufmann: Yes. (LAUGH) I mean, I was– I was so excited.

Now 52, ​​the father of four performs mostly in Europe to be close to his family. When we were with him in Munich, he wanted us to experience the centuries-old tradition of Oktoberfest. This tenor may be protective of his voice… but he still likes to have a good time.

Norah O’Donnell: But as a tenor, you can not drink that much beer. Can you?

Jonas Kaufmann: No, no. I mean at least not if you have to sing the next day. But beer is something that does not harm your voice, as far as I know. So, you can drink it if you want to.

Norah O’Donnell: Beer does not harm your voice?

Jonas Kaufmann: No, not at all. On the contrary. It helps.

It has not been all wiener schnitzel and encores. In 1995, early in his career, after repeatedly forcing his instrument into places it did not naturally go, the tenor lost his voice on stage – and also his confidence in his career.

Norah O’Donnell: You wanted to quit?

Jonas Kaufmann: Of course, I wanted to quit. If you do a job that is so highly risky that you never know when you walk on stage whether you’re gonna finish the evening in– in glory or in misery, why would you do it?

Norah O’Donnell: But you enjoy it.

Jonas Kaufmann needed to abandon all his faulty techniques that nearly cost him his voice and start again from scratch.

Norah O’Donnell: How did you rebuild your voice?

Norah O’Donnell: And how did your voice change?

Jonas Kaufmann: I always say if you– you compare it– you’ve been driving a Mini, and then you suddenly– go to– to a 40 ton truck. And (LAUGH) – and you think you’ve never been driven a car before. Because it’s just steering alone is– is so weird.

Armed with both this darker, larger voice – and a heightened sense of caution – Jonas Kaufmann rose to the top of the opera world carefully choosing his jobs … resisting pressure to commit to roles until his voice was ready to meet the challenge.

Jonas Kaufmann’s career is marked not only by the moments he has risen to the occasion – but also by the times he has not taken the stage. In his quest to protect his instrument he has frequently canceled bookings, leaving opera houses scrambling and ticket holders disappointed.

Norah O’Donnell: Did you ever worry about gaining the reputation of someone who’s a chancellor.

Jonas Kaufmann: Yes. Of course. That is the risk. And– there was a time when you would Google– Jonas Kaufmann, the next word that came was, “Cancel.” (LAUGH)

Norah O’Donnell: You can laugh about that?

Jonas Kaufmann: I can laugh about it. Because it would not change– a hair. You see, I would not do anything different.

Jonas Kaufmann: It’s my responsibility for– to protect my instrument. I love this job so much that for no money in the world, I wanna give it up. So I want to sing for as long as possible.

Norah O’Donnell is the anchor and managing editor of the “CBS Evening News.” She also contributes to “60 Minutes.”