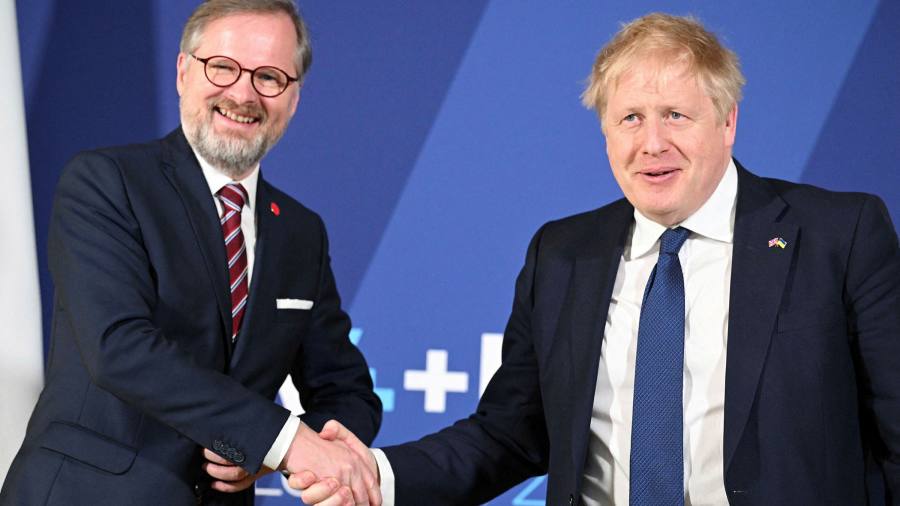 Boris Johnson is hoping the Czech presidency of the EU in the second half of 2022 will open the door to a more productive relationship with the 27-bloc, including on the vexed issue of post-Brexit Northern Ireland trade.

The Ukraine crisis has given the UK prime minister an opportunity to build ties with countries in central and eastern Europe – including the Czech Republic – as the UK adopts a hawkish stance towards Russian President Vladimir Putin.

Britain’s relationship with the EU has soured in recent weeks after what appeared to have been a rapprochement at the start of the Ukraine crisis.

Johnson remains at odds with Emmanuel Macron, French president, whose country holds the rotating EU presidency until June 30 and who takes an uncompromising stance on Brexit issues.

One ally of Johnson said there were hopes that the Czechs would take a “pragmatic” approach to the EU presidency and would be “open to discussion” in the longstanding row over the Northern Ireland protocol, part of the UK’s Brexit agreement.

Johnson has decided not to activate the Article 16 override mechanism to suspend parts of the protocol, which governs NI trading issues, before elections in the region on May 5 at the earliest. “We’ve been told to avoid any controversy,” said one British official.

But EU diplomats insisted the Czech presidency, starting in July, would not prove more malleable. “There is no Czech policy on Brexit, just an EU policy,” said one.

Another said: “The entire presidency will be dominated by Ukraine. It affects every file. ” The Czech government said it would continue with current policy regarding Northern Ireland.

The Russian invasion of Ukraine has given the UK a chance to ally with the EU and politicians from both sides hoped it would ease the tensions present since Brexit. But this week Johnson was not invited as a guest to a European Council meeting discussing Ukraine, even though he was in Brussels for a NATO and G7 summit.

Joe Biden, US president, was invited to the EU summit, which was presided over by Macron.

Relations with the EU have soured after Johnson’s speech to his Conservative party’s spring conference in Blackpool, in which he appeared to link “freedom” loving Brexit voters and Ukrainians fighting for their liberty.

Johnson’s allies insist this was not his intention and his meaning was intentionally twisted by his critics, but the comments caused outrage in Paris.

Philippe Errera, political director at France’s foreign ministry, wrote on Twitter: “If I were Ukrainian, I would feel insulted. If I were British, I would feel ashamed. ”

However, Johnson believes that in spite of cool relations with Paris and Berlin, Britain is cultivating strong ties, underpinned by security co-operation, with countries in northern, central and eastern Europe.

One British official said that “the UK looms large on security issues”, as a member of NATO, the UN security council, the G7 and the Joint Expeditionary Force, a UK-led military intervention initiative including Nordic countries, the Baltic states and the Netherlands.

Britain’s tough stance on Ukraine, including leading the way in providing arms to Kyiv, prompted Dmitry Peskov, Putin’s spokesman, to claim this week that Johnson was “the most active participant in the race to be anti-Russian”. Downing Street said the prime minister was “anti-Putin”.

Johnson did meet Ursula von der Leyen, European Commission president, this week on the margins of the G7 summit, but the meeting was short with varying accounts of what was discussed.

Both sides agreed that they talked about Ukraine and sanctions but the UK government added that they discussed “ongoing issues with the Northern Ireland protocol”. An EU official disputed that, saying that Johnson might have mentioned it, but Von der Leyen did not.

Johnson had a call this week with Charles Michel, EU council president, and they agreed to meet in the future, but Northern Ireland would be low on the agenda, an EU official said.

“The work we have done on Ukraine is exemplary. But it does not affect EU / UK issues. It is not going to change our policy, ”they said.

Brussels has agreed to changes to ease the trading arrangements between Great Britain and Northern Ireland agreed in the Brexit deal, but Johnson says they do not go far enough and has threatened to suspend most checks on goods.

David Lammy and John Healey, the opposition Labor party’s foreign and defense spokesmen, respectively, wrote in the Independent: “It is no secret that the government’s needlessly confrontational approach to leaving the EU has damaged the UK’s standing with major European allies, and relations must be rebuilt to make Brexit work for Britain. ”