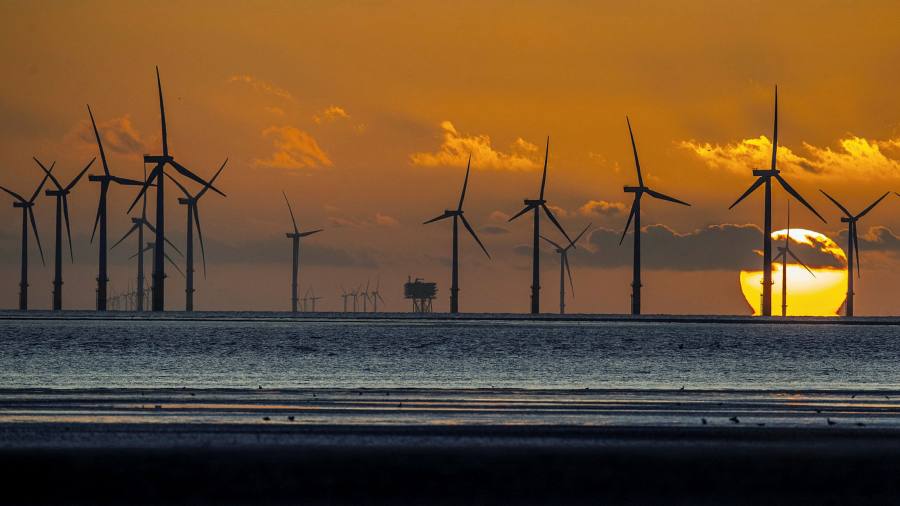 Boris Johnson will announce plans on Thursday to increase Britain’s offshore wind power capacity fivefold by the end of the decade as part of a push to make 95 per cent of the country’s electricity “low carbon” by 2030.

But the prime minister has backed away from setting firm targets for other cheap renewable technologies as he unveils plans to bolster the UK’s energy security.

The long-awaited strategy document, which is aimed at increasing domestic supplies of energy following Russia’s invasion of Ukraine, will also set out plans for more nuclear power plants to meet 25 per cent of forecast electricity demand by 2050.

The strategy has been delayed by several weeks following wrangling between Downing Street and the Treasury over the cost of some policies.

Among the more eye-catching targets in the document is a commitment to increase offshore wind capacity to 50 gigawatts by 2030, up from just over 10GW at present. The target had been 40GW by the end of the decade.

Johnson will say that the strategy would reduce the country’s “dependence on power sources exposed to volatile international prices we can not control” and promise “greater energy self-sufficiency with cheaper bills”.

The prime minister also wants to expand Britain’s solar power generation capacity from 14GW at present, although he has yet to set a firm target. Instead, the strategy will set out an ambition that solar capacity “could grow up to five times by 2035”. The 2030 target for the production capacity of low-carbon hydrogen will be doubled to 10GW.

The plans for 24GW of nuclear power capacity by 2050, from 6.9GW at present, would initially involve approving one new plant, expected to be the proposed £ 20bn Sizewell C project in Suffolk, before the next general election.

Approval of two further nuclear projects would then follow and potentially include “small modular reactors”. This new technology is being developed by companies such as Rolls-Royce, the aero-engine maker that also builds the nuclear plants that power the UK’s submarine fleet.

Johnson has however held back from committing his government to a target for more onshore wind capacity, despite initially signaling support. The technology is among the cheapest ways of generating electricity in Britain, when the weather is favorable.

Instead, the strategy will pledge to consult on creating “local partnerships” in a “limited number of supportive communities in England” that might wish to host new onshore wind infrastructure in return for guaranteed lower energy bills. Johnson retreated after strong opposition from some Conservative backbench MPs.

Several other elements of the strategy will anger climate campaigners and some scientists, including plans to hold the first oil and gas licensing round in the North Sea since 2020 this year. Energy experts are also likely to decry the absence of a new, well-funded program to improve the energy efficiency of UK homes, which rank among the worst in Europe.

Few if any of the measures contained in the strategy will relieve the immediate financial pressure on British households from spiralling energy bills. Wholesale energy prices were already high even before Russia’s invasion of Ukraine but the war has increased the volatility in global commodity markets as countries across Europe race to slash their reliance on imports.

Bills for 22mn British households increased 54 per cent to nearly £ 2,000 a year on average at the start of April. They are expected to rise to at least £ 2,600, and potentially to as much as £ 3,000 a year, in October when the “energy price cap” is next adjusted.

Energy experts have also questioned how much the new strategy will add to energy bills in the longer term. Alasdair Grainger, net zero director at Grant Thornton, said it was “critical” that new targets are matched with greater transparency about how they will ultimately be funded, and how much bills may rise to fund [the] increased ambition ”.